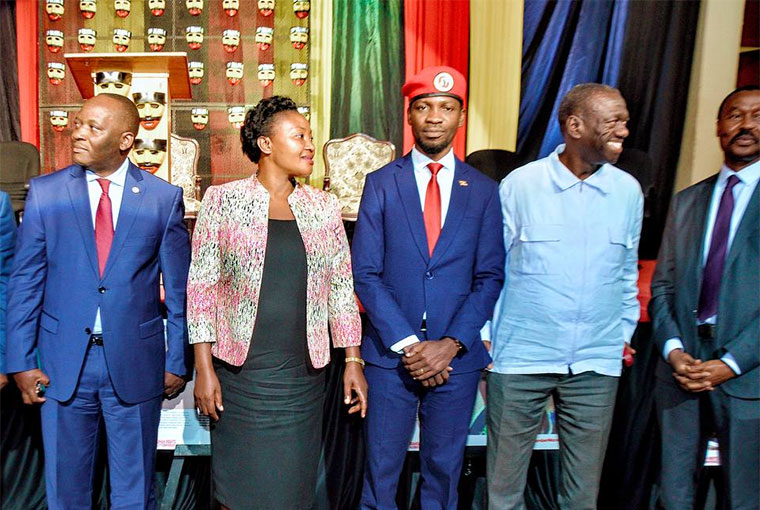 When new reports broke of a groundbreaking Ugandan human rights event in Nairobi, Kenya, you might say we were bewildered.

Why were our downtrodden human rights in Kenya? Is this how our gallant soldiers would overrun Nairobi in two weeks as the general of unrestrained tweeting projected? The opposition floored us!

This whole time they have been making their usual noise kumbe they were working together in the background towards the Uganda Human Rights Accountability Conference (UHRAC). Hosted by the Kenya Human Rights Commission, (KHRC), there stood doyens of Uganda’s opposition, side by side in a gratifying show of unity at the UHRAC.

From Kizza Besigye, Mugisha Muntu to Robert Kyagulanyi/Bobi Wine and others - the ugly ducklings of Uganda’s pluralism stood together demanding justice for victims of state-sanctioned human rights abuses.

If today your human rights are as intact as your limbs, your skin free of any zealous torture scars - what a fine privilege! Ideally, one should use that privilege to safeguard ‘the other’ who, in the exercise of their rights, attracts vigorous abuse.

As quisling citizens, we often close ranks and silently look on as the rights of the ‘other’ are trampled. We understand the assignment - no one wants to end up maimed or dead. We selfishly sigh in relief that our rights are intact. Running low on hope and high on cynicism, we mock victims for exercising their rights.

When opposition supporter Alexandreos Marinos exposed her tortured buttocks on social media, she fingered army officers for her ordeal of torture and sexual abuse. Her alleged crime? Playing the music of musician and opposition leader Bobi Wine in the confines of her home near the army headquarters. Some on social media criticized Marinos for being so foolish as to play such music in the hearing of the army headquarters.

When we attack victims for being attacked, we thoughtlessly excuse the violence of their attackers and invite impunity to move in. We only deceive ourselves when we lay low, sleep our uncomfortable sleep, keep our questioning heads down, and quiet our dissenting voices. Grateful for our impassivity, impunity rides gloatingly on the backs of self-deceit.

Why then did the opposition take the conversation on impunity and human rights to KHRC? We know why. Human rights in Uganda is too distracting for a regime with only eyes for the sun-kissed year of 1986. For regime apologists, a discussion on human rights is to invite unbridled derision with a generous sprinkling of teargas.

On November 18 when National Unity Platform members marched in commemoration of the November 2020 killings, the police did not miss a beat. Barely 200m into their march, the police teargassed the NUP activists, reported The Independent magazine.

We cloak that which we cannot say for fear of being ‘droned’ in premium humour. When you exercise your rights too brazenly, fellow Ugandans quickly warn you, “What colour of drone would you like?” Ironically, the police have adopted the word – drone, in their official communication.

The November 14th police press release warned taxi operators using “drones” as taxi vans, that their vans would be impounded. In an African Institute for Investigative Journalism interview, Chris Baryomunsi, the minister of Information and Communications Technology and National Guidance,  on state security’s use of ‘drones’ to arrest people, said, “Being put in a drone is not illegal. There is no law that says when you are arrested you should be put in a Benz.”

Yes, why did the opposition take the human rights conference to Kenya when in Uganda we can sidestep the ugliness of impunity and instead debate like primary school children, ‘The Benz is better than the Drone’?

A brief comparison of November 17- 18 Twitter posts from the KHRC and our dear Uganda Human Rights Commission (UHRC) is enlightening. In the words of the bazzukulu, KHRC goes hard while UHRC is living the soft life.

Alongside the UHRAC, KHRC candidly tweeted on 17 November, “Ugandan security forces under Yoweri Museveni have sustained extreme violence against his opponents sustaining a campaign of eliminations, kidnaps & torture.”

Other Twitter posts reiterated unapologetically, “The conference coincides with the commemoration of the two days in November 2020 when Ugandan security unleashed unprecedented violence on young protestors killing over 100 young people.” The audacity of being Kenyan!

During the same period, our UHRC continued flat lining in its void existence. The UHRC Twitter page yawned loudly; nothing to see, just happy people in workshops. Not even a pretentious squeak from UHRC about the November 2020 killings.

The UHRC Twitter page (as of November 19) was last updated on November 11 with a bland post about its members attending a workshop in Nigeria. How would we even measure results in this country without workshops and per diems? Therafa, we are fine.

Everything works. Hakuna mchezo, steady progress, secure the future…yes, imbibe the flatulent mantras and sleep like a good Ugandan. The regime’s impunity is counting on it.

She accused booers ( opposition) of intolerance and reminded her listners that " foras in NRM, we listen to you"
Hmmm !!!

Apparently , Nabanja has never heard of the story that Ms.Olivia Nalubwama is here to share.
Report to administrator
+2 #4 Kent Mawa 2022-11-23 17:28
Sadly , it is not only Nabbanja that is totally blind when it comes to what is going on outside of her scanty scope.

The Wastern World ( particulary a few Euoropean Nations) is very very angry that FIFA has refused the Football Team Captains to wear ONE LOVE flags; a symbol of homosexuality..

According to them , this is the "WORST" human rights violation in history ´ Denmark , which is known for discrimating immigrants is threatening to quit FIFA

These "superior cultures " have not cared if a Ugandan dictator tortures Alexandria Marinos; but if she claimed to be gay , these scouts and protectors of universal "morals" would be herding the whole world as though we all are their cows.
Report to administrator
+1 #5 Lysol 2022-11-25 00:31
The opposition should form a government in exile.
Report to administrator
-1 #6 Remase 2022-11-25 13:48
Tayaad, you have consistently tried to motivate the opposition, Kyagulanyi/NUP in particular, to take constructive and focused action with tangible oriented results, but most importantly rejuvenates hope that, at the end of it, change will happen.

Kyagulanyi/NUP and his sycophants are not only making meaningless noise but have conspicuously dampened down hope to realize change.
Report to administrator
-1 #7 Remase 2022-11-28 00:53
Kyagulanyi seams to strike the right note, however, apart from achieving personal gratification and make believe that he is a revolutionary, the bottom line is, he is a fugazi.

Taking trips around the world wont yield the desired results of brining the change in Uganda. What did benefit from taking our human rights issues to Kenya? Kyagulanyi could scream at top of his lungs and expose M7's abuse of our human rights, nothing Wil come out it that will bring change to Uganda. No president in Uganda has ever attracted sanctions like Amin, however, our economy was better than now.

So, M7 is not afraid of sanctions. Change will only come through our own sanctions on M7. Mpuuga is the leader of opposition in parliament and protected by M7's SFC militants! How are his human rights abused? Ask him if he cares about anybody else!
Report to administrator