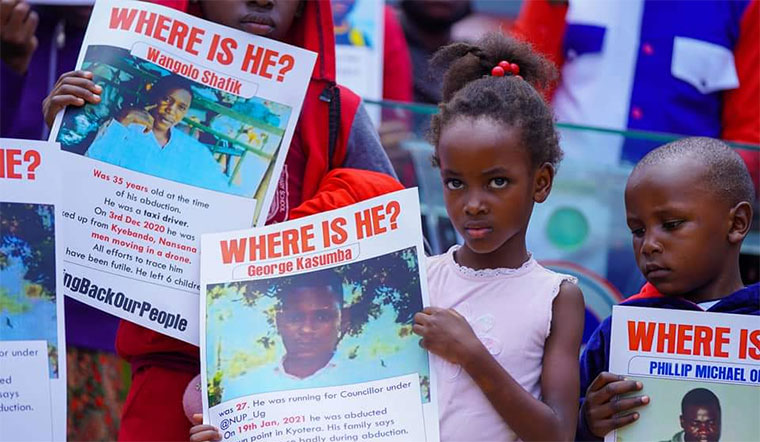 Some of the children of the abductees

Riding on political populism and to establish a safe distance from past regimes notorious for disappearances, kidnap, torture, and death of citizens, President Yoweri Museveni told Special District Administrators (SDAs, precursor of RDCs) and other security heads in 1986 that he would not lead a country where a citizen is killed and the leaders do not know who did it.

Col Kizza Besigye was the powerful minister of state for Internal Affairs then. The president characterized such killings as state-inspired terror. All seemed well until the power dynamics changed. When the goal of NRA changed to consolidating and concentrating power in one person, the inevitable nefarious tools of real politics reared their ugly heads.

The most infamous apparatus was the creation of ‘safe houses’. This is a misnomer! There is nothing safe in them. This is a euphemism for torture chambers. It is here that the Internal Security Organisation (ISO), the Chieftaincy of Military Intelligence (CMI), and other security agents torture political opponents.

Others are disappeared. In the immediate aftermath of the 2021 general election, many members of the National Unity Platform (NUP) led by Robert Ssentamu Kyagulanyi, were picked by armed but unidentified persons and driven away in unregistered cars.

The captives have been subjected to heinous forms of torture. Asked about who is kidnapping Ugandans, police claim ignorance. The army too denies involvement. After a loud public outcry, Presidential Advisor Lt. Gen Proscovia Nalweyiso admitted that security forces were keeping some of the kidnapped NUP supporters. NUP claims those kidnapped or disappeared are in their hundreds.

In his speech about torture in August 2021, the president sounded like he was reflecting on his failure to protect Ugandans against torture, human rights, and heinous crime, which he claimed inspired him to take up arms against past governments.

But then in another instance, he became the real him who takes no blame for anything. He characterized torture acts by security forces as mistakes that were committed by undisciplined officers.

He also added that the suspects could have been tortured because the security agents were either not adequately briefed by their superiors or they were lazy to do proper investigations to establish the facts to convict the suspects.

The president promised that Brig Kaka Bagyenda and other architects of torture would be prosecuted. It has not happened. Recently, men armed and dressed in army uniforms were seen kidnapping a Pakistani.

Both the army and the police distanced themselves from the act. Question is, who is in charge of our security? If the president, to whom all intelligence services report, doesn’t know, who knows?

Who has the right to kidnap? Who keeps the guns and uniforms? Don’t Ugandans have a right to be respected and lawfully arrested? With all these security devices, why aren’t culprits brought to book?