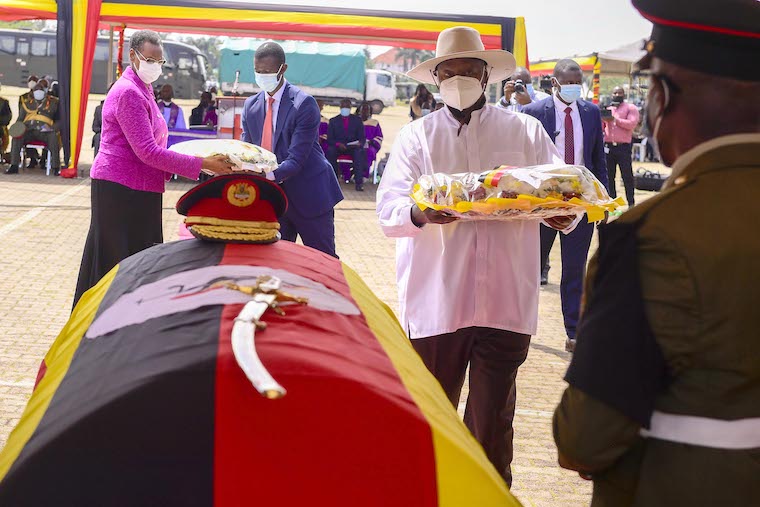 It is also the more we witness the death of celebrities known and unknown to us. In past the two years alone, I have lost many celebrity friends: Sheikh Nuhu Muzaata Batte, Sheikh Dr Anasi Kaliisa and Archbishop Cyprian Kizito Lwanga.

About five years ago, I lost a dear friend of mine, my wife, princess Ramlah Ssimbwa Nkinzi. [She was a princess in both lineage and character—and I hope to write a full book about her someday, God willing].

These deaths have made me reflect deeply about the absolute smallness and unpredictability of life. While they also made me humbler, in a strange way, they also made me quite fearless about the pursuit of right and doing good. Or even speaking truth to power.

Political or apolitical, we are all going to die, and thus the imperative to be good, fair and kind to and with whomever we occupy this world.

But it was after the death of Archbishop Lwanga that I fully developed my cynicism with William Shakespeare. Not all of Shakespeare, of course, but the famous lines of Mark Antony upon the death of Julius Caesar: that “the evil that men do lives after them and the good is oft interred with them in the bones.”

Meant specifically for people with public profiles (such as kings and queens, military generals, and princes), Shakespeare sought to underscore the point that, talkers and chroniclers tend to exclusively recall the evil of these noble characters and, unfairly, completely forget their good actions.

Truth is, Shakespeare and Mark Anthony were wrong in this regard:  the evil that men do—and the good that men do—both live after them. But what we choose to remember is often a political decision—often determined by way of a weighing scale.

If the deceased lived an evil, selfish, ruthless, remorseless and tyrannical life with their neighbours, treated compatriots like rubbish, the chroniclers and talkers will simply return the favour: they will be ruthless and remorseless in eulogising them, and will laugh at their times of vulnerability.

This does not take away the fact that the deceased could have been good to their families and close friends. But that this goodness stopped with their kindred and close circles, who are even suspected—oftentimes, rightly—as the absolute beneficiaries of the bad manners of their deceased kindred.

Indeed, for the wananchi who lived through the pains of their actions, the meanness of their utterances and dangerousness of their decisions, their death is cause for celebration.

And this has nothing to do with African or religious traditions but, rather, natural reactions— as Shakespeare would say elsewhere in the Merchant of Venice: “If you prick us, do we not bleed? If you tickle us, do we not laugh? If you poison us, do we not die? And when you wrong us, shall we not revenge?”

These are simply natural reactions, which are also true of Newtonian physics. Interestingly, African tradition is replete with sayings that actually sanction celebrating the demise of one’s perceived or real enemy (while also cautioning about respecting the deceased).

Thus, commenters claiming it is un-African not to say bad things about the dead are actually referencing non-African sources because tradition tends to be consistent with natural reactions.

Dear reader, it was upon the passing of Gen Elly Tumwine that I got prompted to ponder these questions about life and death, commemorations, legacies and the memories our leaders leave behind as they hold major public offices.

My question is this: do our leaders—especially Museveni’s friends and the entire NRM generation—ever think about the good or evil that will live after they have died?  Those still living and those who have passed, did they ever think about the nearness of death and the fleeting nature of their lovely lives?

Is it true that these folks are convinced that the public is wrong about their actions, that they mean and have done so well, and the public is simply cynical?

Is that why the late Afande Paul Lokech came on national TV and said he was at peace after murdering so-called terrorism suspects without any due process? Is that why late Gen Tumwine threatened compatriots that police had the right to shoot them without due process?

Why did late Governor Emmanuel Mutebile close all native banks (without due process or minutes), impoverishing millions and never stopping for a second to think that he might be no more at some point?

Why would someone steal money meant for HIV/Aids patients without considering the many lives he risked?  Why all the theft, the violent land grabs, the accumulation by dispossession? Why?

At the end of all these questions, it becomes clear that these men and women see death as far, as far away from them - as something that will only happen to them when they are in their senile years.  That they will only pass out quietly in their sleep with no schedules ahead, and no debts to settle.

My sense is that our leaders—high on power and privilege—see death as only happening to their subjects. And themselves as immortals. But these past years have brought death home to roost – and many once feared men and women are falling.

It is my hope that as we prepare to bury comrade brother Gen Elly Tumwine, we learn to take lessons from the dead:  life is but a walking shadow… a tale told by an idiot, full of sound and fury, but signifying nothing.

it is now very clear who is responsible for the gruesome deaths that took place in Luwero,

- the gruesome death and torture in Northern Uganda

- the cutting off of arms, noses, etc.

this is ONE of the most brutal, heartless gang of war lords in the WORLD.

They have never apologised or shown remorse.

What if [the majority of the country is not with them.] say NO to the tribalistic system & UNITE?

Why wait for next fake election to ensure Museveni's post?

Maintaining the tribalistic system means Ugandans still want Museveni & will be his slaves & not owners of their tribal lands!

Once Ugandans are ONE PEOPLE & show Museveni way out, from which tribal land will he fight from this time & which tribes will stay by his side?
Report to administrator
12