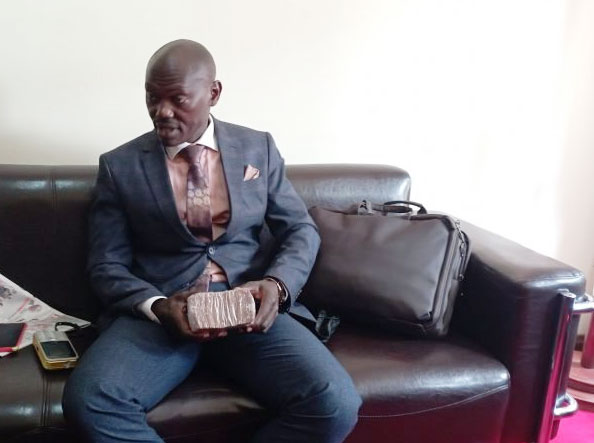 MP Twaha Kagaba with the money

Many voters complain their Members of Parliament (MPs) abandon their constituencies after getting to parliament.

They rant about MPs who go mute after joining Parliament. Some of those MPs have broken their vows of silent eating, coming out to prove they still live and walk this earth. These MPs argue they are working hard out of the media glare.

Before Kenya’s nail-biting presidential elections took over our lives, one previously unknown MP stampeded his way to the news headlines. And this is how the rest of us met MP Twaha Kagabo and his forlorn bundle of Shs 40 million.

According to media reports, on August 9, Kagabo undertook a good deed - return Shs 40 million. He attempted to return the money through the Leader of Opposition, NUP MP Mathias Mpuuga. In June, NUP shouted itself hoarse, demanding its MPs return a Shs 40m bribe allegedly paid out to MPs as a reward for passing the supplementary budget.

NUP implicated Parliament Speaker Anita Among, claiming that opposition and independent MPs had received their share from her residence while ruling party MPs received theirs at Parliament. Parliament stoically denied any such payouts. How little they must think of us.

We might be useful idiots of citizens but please do not let our impotent humorous Ugandan charm deceive you.Kagabo told us,  after two months of consulting his constituents and deep soul searching; he decided to return the money. Mpuuga directed him ‘back to sender,’ advising Kagabo to return the money to the Speaker’s residence.

Mpuuga offered his official escorts to accompany Kagabo to the Speaker’s residence. At this point, things fell apart for Kagabo. One would expect that when Kagabo reflected on the error of his ways and decided to do the next right thing, his party would celebrate him for choosing the hard road when the soft life was his Shs 40m. Having admitted to receiving the money, perhaps, Kagabo envisioned rapturous applause for his good deed.

Woefully, his soul-searching has led him to self-immolate in his own movie. The police escorts meant to accompany Kagabo to return the money from whence he got it, instead delivered him to the Inspectorate of Government (IG), our prayerful anti-corruption body. The IG arrested Kagabo and his Shs 40m.

In Parliament, the Speaker took great offense to her unblemished name being dragged into Kagabo’s good deed. She was so indignant that she stepped aside to allow for independent investigations into the matter. Haa!

Calm yourself - we do not deserve such nice things. The Speaker instead directed Parliament’s disciplinary committee to investigate Kagabo, bristling: “He claimed I am the one who gave him that money. That is an abuse of this House. I do not know him... This house should not be used for playing politics.

He has to show us who gave him the money, and what the money was meant for.” What a breathtaking display of unbridled power - at the cost of accountability. The United Nations Office on Drugs and Crime notes whistleblowing is the most important way to expose wrongdoing in public sector organizations.

By now, Kagabo has had quality time reflecting on his good deed - he might find himself in agreement with this finding: Whistleblowing is not for the weak. A 2018 Devex article on two United Nations (UN) whistleblowers highlighted how they felt ostracized, blacklisted and in the case of one, lost their job - for speaking out against wrongdoing within the UN.

This is where Kagabo’s political party, like a beefy bare-chested warrior on a red elephant, should stomp in on behalf of their besieged MP. NUP as the leading opposition party ought to be jumping gladly onto low-hanging fruits like Kagabo’s good deed since they are yet to show how many MPs have actually returned the money.

Retaliation included, “spotlighting whistleblowers by trying to attack their credibility or competence; threatening them into silence or termination of service; isolating or humiliating them; setting them up for failure; driving them into psychological isolation; denying them access to institutional resources; prosecuting them; eliminating their jobs or paralyzing their careers.”

Whistleblowers face retaliation because they can ruin an entire institution depending on the nature
of the wrongdoing. The study further highlighted whistleblowers are unlikely to suffer retaliation when they have greater power. Again, whistleblowing is not for the weak.

Thus, Kagabo, as you stand abandoned with your bundles of money/evidence, choose violence. Since you have been directed to return the money - do that. Show us from whence you got the money- post those screenshots, bleat shamelessly like a goat to the slaughter. If you are going to burn over this, bring your own premium firewood and expensive fuel. Burn that house of cards down.

And the more the line between GOOD and EVIL is fading away very fast.

Otherwise, your cryptic suggestion that Hon Mathias Mpuuga might have tricked/betrayed Hon Twaha Kagabo; by offering his police escorts, which instead handed him over to the Inspectorate of Government (IG) that in turn arrested poor Kagabo, is not far from the truth of the "catch 22 dilemma" many Ugandans are trapped in.

Be honest, report wrongdoers and you are damned, and be dishonest, take fat bribes and your soul and public image is damned.
Report to administrator
+3 #2 Zaitun 2022-08-18 19:18
That is the "Uganda" the so-clled men from Bush are going to leave behind.

All they want is every Ugandan should become a confirmed and professional baggler like they are themselves.

All these NRM members, the NUP officials are nothing but a photocopy of Museveni. Their top leaders are all silent members of NRM except for the poor followers who never knew the arrangement between NRM and NUP officials.

We ordinary Ugandans are doomed and living on the moon.
Report to administrator