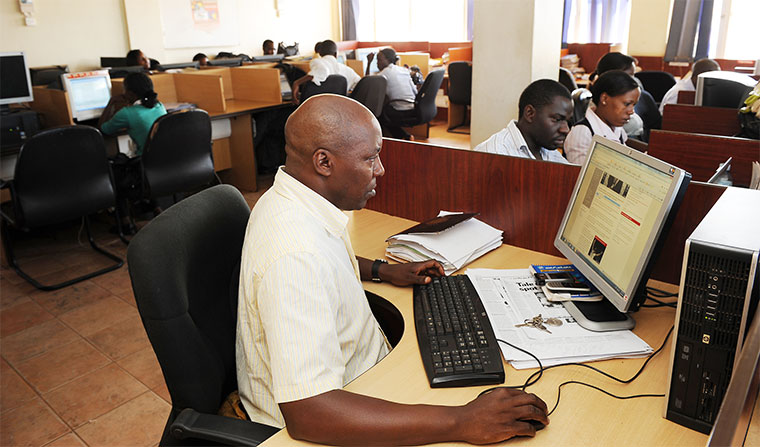 Wafula Oguttu, the first Editor in Chief of The Monitor said that he and his other colleagues had to quit the defunct Weekly Topic, because the owners, some of whom were President Yoweri Museveni’s ministers, wanted to gag them.

They had to run away and create another medium where they could express themselves freely as they contributed to democratic practices and national development. Indeed, they described themselves as a complementary forum to the already existing newspapers.

In their inaugural editorial, they said: “The guiding virtues in our work shall be democratic practice, observance of human rights, unity of Ugandans in diversity, clean environment, protection of minorities and the underprivileged like women, children and the disabled...”

They also pledged that no issue would be excluded from The Monitor if it is part of a development process including the struggle of the oppressed to emancipate themselves. Indeed, these standpoints made The Monitor the thorn in the NRM’s flesh but also endeared it to the readers and improved the quality of journalism.

We congratulate The Monitor for endeavoring to fulfill their pledges despite the harsh environment they operated in. The National Resistance Army (NRA), the guerilla outfit that was led by General Yoweri Museveni that eventually toppled General Tito Lutwa’s military junta had then appropriately labeled themselves freedom fighters.

Ironically, freedom of expression and freedom of the press were some of the earlier victims of the NRM assault. The group that eventually took power from the jungles of Luweero triangle had an overrated sense of entitlement.

It appears the NRM expected unquestioned reverence from the press. The Monitor then was bent on holding the NRM to account. While the guerillas were fighting in the bushes, they were never used to criticism. They introduced several phrases as a euphemism for no criticism in the Ugandan lexicon: “constructive criticism, right forum, etc”.

These too were vague. Their appropriate use depended on who used them. The president was at liberty to criticize his colleagues in public while his subordinates were not free to run to newspapers to vent their ire in response. Some newspapers such as The Weekend Digest led by Dr. Jesse Mashate were banned for publishing a ‘false’ story.

Mashate had alleged that some elements within the new administration were plotting to overthrow Museveni. Mashate
was never tried but fled to the UK. The freedom fighters who toppled the military junta to protect human rights suspended provisions in the then 1967 constitution which didn’t favour them but retained and weaponized colonial laws such as the law of
sedition to restrain The Monitor.

Very often, The Monitor editors (Wafula Oguttu, Charles Onyango Obbo, and David Ouma Balikowa) were summoned to police stations to record statements about publishing seditious stories. Until the Supreme court struck out the law criminalizing “false news”, President Museveni had often used that law as a weapon against The Monitor.

But The Monitor stood firm and challenged this anachronistic thinking in courts of law. Fortunately, some members of the judiciary then were independent-minded and valued justice. They often delivered judgement that saved The Monitor and perpetuated democratic values.

The outfit that captured state power, promised liberty and fundament change, but soon resorted to draconian tactics of dealing with the press. The secretary to the cabinet was ordered to inform all government agencies not to advertise with The Monitor.

The intention was to strangle The Monitor economically. Once while meeting media owners in Uganda in 2018, at State House Entebbe, one of the media owners who is also a religious person stunned colleagues. He told the president that he had started the media house to remove the poison that has been planted by the opposition against the government.

That he would never allow such ‘poisonous’ views to be conveyed through his medium! We have to congratulate The Monitor for not harbouring such views. For if they had, the media space would be fraught with propagandist channels.

It is at The Monitor that the finest journalists in Uganda were nurtured and trained. The Monitor has been a springboard for many media houses. It is because of The Monitor’s existence that the country has a breath of independent journalism.

Their endurance proved that some things such as freedom of expression and press are worth fighting for and can be achieved. Congratulations.