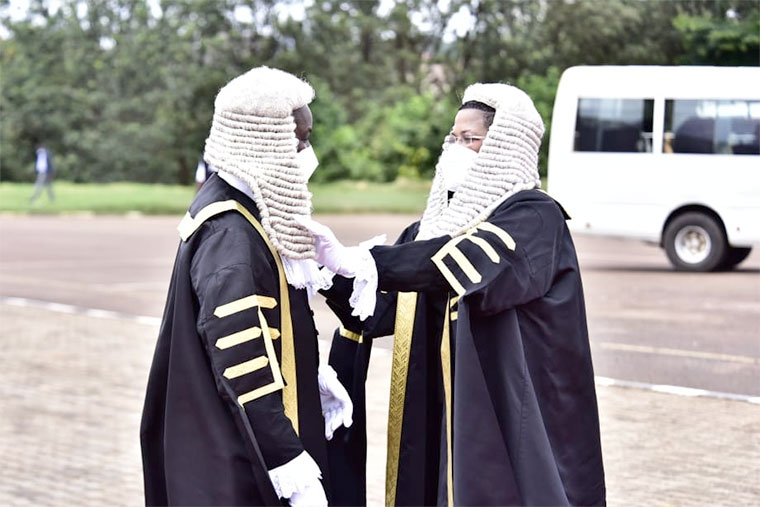 It might surprise our leaders that in addition to being immunized quislings, we are first, citizens.

In times of crisis, we look to our dear leaders even when we know better. For we have been here since the sun-kissed year of 1986, some things about our leaders should not surprise us, citizens.

We listen to our leaders not because their voices carry the soothing melodies of the Bachwezi rivaling our Afrobeat anthems. We watch them speak not because we find their fleshy countenances cathartic.

It might exasperate our deified leaders that we citizens expect solutions and more solutions. We cannot help ourselves. It comes with the territory of being a citizen. Leadership is exacting and unrelenting or it should be. Even citizens in failed states expect some modicum of leadership from their debilitated governments. When we tune in to our leaders for solutions relevant to our times, not the yesteryears of 1986, but instead come away disillusioned and emasculated, where do we go next?

The fallout over President Museveni’s preference for scientists continues despite the president’s assertion that our revered scientists will singlehandedly leapfrog Uganda into the middle of midro-income status.

After the closure of schools for 22 months due to anti-Covid-19 measures in Uganda, the education sector is still with its pants around its knees. Amidst the struggle for education to recover, the teachers have laid down their tools.

On June 15, these citizens, through their umbrella organization, the Uganda National Teachers’ Union (UNATU), declared a nationwide strike, protesting the government’s discriminatory policy to increase the pay of only science teachers by 300 per cent.

On June 18, the lowly citizens of UNATU met with government leaders in a meeting chaired by President Museveni where they declined to call off their strike until their demands were met. High-ranking citizen, Prime Minister Robinah Nabbanja, was not impressed by the teachers’ resolve.

According to The Grapevine news website, Nabbanja threatened, “This time is not for joking; this is a government in power and all Internal Security Organisation (ISO) operatives are directed that from 24 June 2022, they should be moving around their jurisdiction inspecting all government schools and recording those teachers who think they are bigger than government.”

Nabbanja might need to refer to Museveni’s notes from the bush war. In December 1985, during the signing of Nairobi Peace Accord, Museveni emphasized, “…the rights of the people must be guaranteed, not the rights of the rulers. The rulers are expendable; they come and go, but the people will always stay.”

Thus, it might stun our powerful leader, Nabbanja, that more citizens are in the strike queue. On June 17, the Forum for Academic Staff of Public Universities in Uganda (FASPU) announced they would lay down their tools until their salaries were enhanced. Last week, the Uganda Local Government Workers’ Union (ULGWU) announced they would going on strike on July 6 unless the government increases their salaries.

According to Daily Monitor, the ULGWU secretary termed the wide disparities in salaries within the public service insulting where the least-paid earns Shs 187,660 while the highest-paid earns Shs 45m.

It might bore our leaders for we have been here repeatedly. In July 2011, ULGWU petitioned the government seeking an equitable criterion for salary allocation in the public service. They sought a uniform salary structure across board including elected leaders (politicians) and government appointees. The petition also bemoaned the government’s refusal to institute a minimum wage.

It might annoy our president that the demand for a minimum wage refuses to cower and die. In 2005, the New Vision reported that Museveni told trade unions, “…stop those slogans of minimum wage and unionisation of workers. Once there are enough factories and there is excess demand for workers, the minimum wage will automatically go up …”

Meanwhile, Museveni on the 2001 presidential campaign trail, told crowds, ‘We are discussing with employers. We shall soon set a minimum wage for workers in Uganda.” Citizens, remember electoral campaigns are intoxicating.

During the 2021 Labour day celebrations, Museveni reiterated that a minimum wage would discourage foreign investment. In December 2018, the chairperson of the Wages Advisory Board (WAB) at a Hivos/ Akina Mama wa Afrika dialogue, lamented that government was yet to respond to the WAB recommendations, which WAB submitted to the ministry of Gender, Labour and Social Development in 2017. The WAB chair also emphasized having a minimum wage does not discourage investors.

Parliament passed the Minimum Wage Bill in 2019. However, the president withheld his assent, arguing existing legal frameworks were sufficient. In 2020, the World Population Review website listed the top five countries with the highest minimum wages: Australia, Luxembourg, New Zealand, Monaco and Ireland. All are lavishly industrialized.

It might reduce our leaders to tears, we know they know that we know the striking citizens will soon be flattered, serenaded, bullied back to work until the next round of striking citizens. Just kidding. Longevity in power has long dried up the tear ducts of the ruling regime.

+4 #1 Lakwena 2022-06-29 10:02
Muzzukulu Mukoowu, the 36-year and counting Self-serving and Anti people/Ugandans regime; is slowly and surely boxing itself into a very tight corner.

A few weeks ago I observed that: including the overworked, house-less/homeless and miserly paid Armed Forces; if all the aggrieved Ugandans stood up on their two shaky legs and said a BIG NO, to Gen Tibuhaburwa's 36 years of falsehood, manipulation, deception, intimidation sic terrorism, etc., it would take less than a week for Mr. M7 and cabal to leave our State House in a hurry.

In other words, including the current striking teachers, the others you mentioned hereabove and the Armed Forces; who in his/her right mind can deny that: like an armed robber, Gen Tibhaburwa M7 got his current job at gunpoint, pays himself at gunpoint (incessant disproportionate Supplementary Budget, and sic classified Expenditure, and keeps it at gunpoint?

In other words, because of compulsive knee-jerk response and/or ill hidden motives; if the UPDF didn't have to go into DRC over the two alleged ADF twin terror attacks in Kampala, this money would be going a long way to do the right things.
Report to administrator
+2 #4 Remase 2022-07-03 16:25
Tayaad Muzukulu, you are a tayaad because of the longevity and endless M7's autocratic govt has been in power!

It is the overstay and endless M7's brutal rule which is destroying our country beyond recovery. Janet M7 said, "What sort of professionals are they? You have betrayed Ugandans. You are not in the teaching profession "to make a living" out of it. If you are recruited to teach, work on our terms."

Then Janet made a disclaimer, "My husband sacrificed himself for this country but he's not complaining yet he gets only Sh. 3m. We are all poor but contented." M7 made it abundantly clear that he never fought for anyone but himself and his family, what is Janet talking about, mbu M7 sacrificed himself?

Janet also once said that we are lucky and should that God to have sent M7, where would we be if M7 didn't come? Tayaad Muzuku, we shall all get tayaad until Jesus comes back and nothing will ever change but get worse each and everyday until we unit to get rid of M7.
Report to administrator
0 #5 Akot 2022-07-03 20:01
Remase, thanks.

It's so sad Ugandans just help/ensure M7 destroys them & their land for good!

By the time M7 dies of old age &t +90, what will his family business be & how old will his son in the waiting to replace the dad be?

Kadhaffi's son who was assured of replacing the father ended up in prison with fingers slashed!

No Ugandan from a tribal land ever finished 5 years in top post (Dr Obote, Sir E. Mutesa ll, Lule, T. Okello), but migrant M7 is assured of lifetime rule & he tribally divided Ugandans but this isn't wrong for Ugandans!

Why are tribally divided ruled Ugandans ensuring they are slaves of M7 & family for good?

Why are so called opposition leaders still helping M7; blinding Ugandans & leading them to fake elections that only protect, bolster, legalise M7?

Why are tribal leaders alright with Ugandans being slaves in the zone formed by their tribal lands?
Report to administrator
0 #6 Akot 2022-07-05 14:50
Olivia Nalubwama,

There are no '"leaders" in shitholes, but useless rulers, dictators, self styled gods!

One man in a group of thousand from South/Central America walking to reach USA said so too last week & they are heading for USA!

Many Africans died only last week crossing to UK & more will die - they prefer dying than being sent back to shitholes!

Yet, these shitholes rulers are the richest!

+36 years, Ugandans still look up to/wait for Museveni to finally serve them! Why will he do so when he got what he fought for, is assured to be lifetime ruler protected by fake presidential election every 5 years in the country that belongs to him?

Ah! Ugandans ensure/protect Museveni with the tribalistic system, knowing developed world politicians will never blame him as long as Ugandans are alright with the system of rule that goes against their principle!

How lucky Museveni is!
Report to administrator