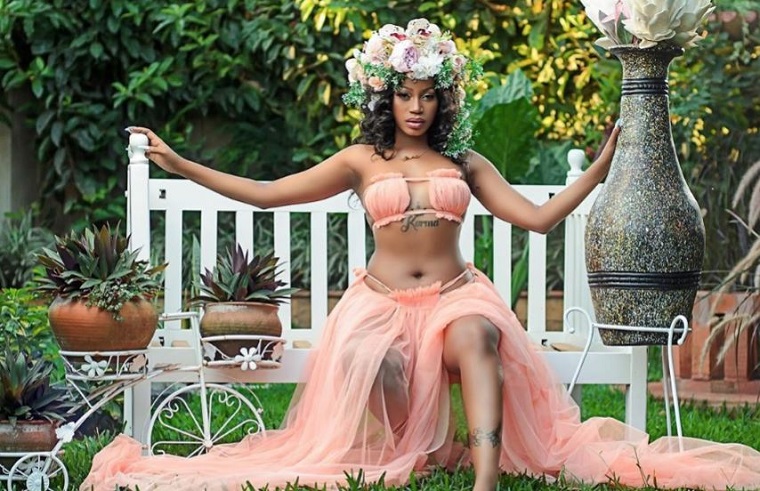 Popular local female musician, Sheebah, stirred up murky waters when she posted a video on her Instagram page revealing that a prominent public figure, an “old pervert” sexually assaulted her.

To the dismay of the internet and its deep unrelenting memory, Sheebah did not name and shame her abuser. Many condemned Sheebah for not identifying her abuser, casting doubt on the authenticity of her story.

A curious split emerged between shaming Sheebah for her raunchy lyrics, her sexy outfits parading her banging body and galvanizing around Sheebah’s message against the objectification of women. Stripping Sheebah of the right to dignity, they reasoned her raunchy style of dressing or the lack of it, and her alluring performances, invited the assault.

Mwenda tweeted he had informed the fully-fledged institution of Muhoozi, who would contact Sheebah and even provide her with protection if necessary. Strangely, 24 minutes before that tweet, Muhoozi, through his Twitter page, had boisterously weighed in on the side of his bestie, Mwenda, and summarily declared Sheebah’s story “definitely another fake story.”

You cannot make this stuff up. One woman did name and shame. On April 20, once again, the powerful emotive image of the tortured buttocks of ye another opposition supporter trended on social media. Alexandreos Marinos, who happened to live near the army headquarters in Mbuya, had a penchant for Bobi Wine’s music.

For playing this music so close to the ears of the army, Marinos told the media that UPDF soldiers kidnapped and tortured her. She publicly named her alleged abusers, citing them for her torture including rape.

NBS TV anchor and theologian Samson Kasumba, like sharp nails screeching across a blackboard, jumped into the fray with several tweets: “Only a professional medical doctor after a thorough medical examination can tell whether a woman is raped or not... That is why I do not comment when one alleges they were raped...”

He continued, “There is so much political blackmail and maligning ... Do not expect me to take everything that comes onto this place as gospel truth. Until it is properly investigated and proven, my doubts always exist. Ugandan politics is dishonest and messy now.”

Kasumba defended his stance valiantly and it seems valid because false accusations and their negative lifelong implications do exist. However, the framing of his argument invalidated the experience of the victim, casting doubt on the authenticity of her story and her mutilated buttocks.

After Marinos outed her abusers, the tide turned against her. UPDF investigations dismissed her accusations. In a press conference, the UPDF spokesperson in the company of the men Marinos cited in her torture ordeal, accused Marinos of faking the torture claims to benefit from President Museveni’s recent directive to compensate all victims of torture.

Like that, her tortured buttocks fell off social media. Her case fizzled out with no one delving into how her buttocks became the gnarled mess they are today.

For all its dazzling professionalism, it was not the most brilliant idea for the UPDF to investigate itself nor for the UPDF spokesperson to appear next to the accused abusers and dismiss Marinos as a liar.

Yes, there is the Uganda Human Rights Commission, a rather lovely organization. That is all there is to it: the loveliness of the perception that Uganda has a human rights commission, which commission we wave like a white flag to calm down the pesky international community.

A 17th century English judge famously remarked that rape “is an accusation easily to be made and hard to be proved, and harder to be defended by the party accused.”

On November 2, 2021, a Chinese tennis star accused a high-ranking Chinese Communist Party official of rape, in an internet post. After her post, she disappeared from public view, sparking global concern. She resurfaced a month later denying the claims, saying her post (which she later deleted) had been misunderstood.

In February during the Winter Olympics, she reiterated she had been misunderstood and went on to announce her retirement from tennis. Oh, the complexity!

The American Journal of Humanities and Social Sciences reporting on a study of the perspectives of rapists, revealed the overwhelming majority of the surveyed rapists believed they would never go to prison for rape. These rapists said they knew women frequently do not report rape and even those who report, conviction rates are low. In short, the rapists were secure.

“These men perceive rape as a rewarding, low-risk-act.”

If these convicted abusers could be that secure in the complexity of sexual abuse, how about we work harder to create spaces to hear out victims without asking how brightly coloured their underwear was before the assault?

The writer is a tired muzzukulu.

Muhoozi, just like his father, M7, is ruthless! Sheeba didn't name anyone, why did Muhoozi come out to call it a fake story? Or why did Mwenda drag in Muhoozi if Muhoozi was innocent? With all that about Muhoozi, an "alleged" rapist and also torturing Kakwenza, M7 is promoting and froting his son to become the next president after him!
Report to administrator
0 #2 Akot 2022-05-20 15:43
Remase,

Ugandans are prepared, fight, complain, but go along with everything in M7's country!

One wonders why +36 years aren't enough & Ugandans still maintain the tribalistic system, look up to M7 to & wait in peace for services!

Which demon ruler, especially a migrant, would leave power freely?

How long will M7's son wait for the post & how old will he be by the time his dad dies of old age?

What have tribal leaders prepared/planed for their own children & how many wives/mistresses & children do they have?
Report to administrator