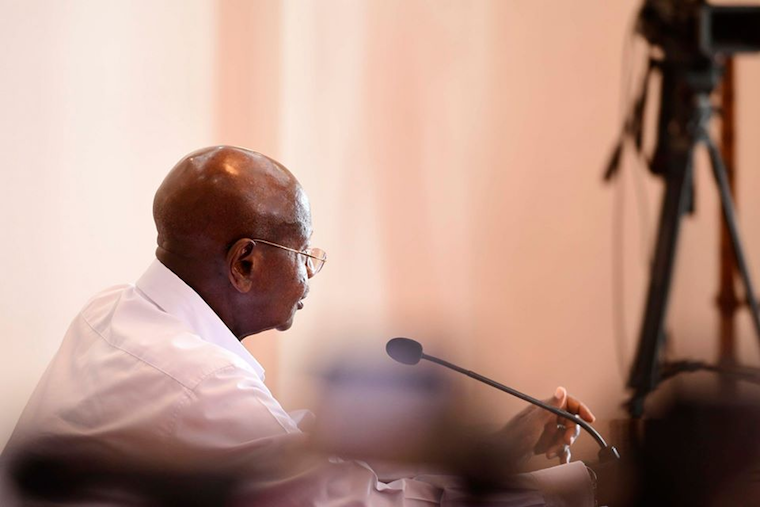 In a clan of hyenas, it is disturbing that the matriarch as the head would carelessly instruct that predating on other animals and scavenging for survival is now bad.

What would the carnivorous hyenas eat then since their lives entirely depend on marauding upon other animals? Definitely, they cannot begin to eat grass—that is living in pretense, and they would undoubtedly starve to death.

The whole clan of greedy, bottomless hungry hyenas would not be happy with their matriarch's perfunctory order of course.

These animals live on wanton marauding without any modicum of thought about tomorrow, an inherited stupid character.

They desire extermination of other species unreservedly without thinking that upon extinction they will or their posterity, lack what to maraud upon. They perfect the kill of whatever they find regardless of whether they are hungry or not. They strip the land of each and every living thing. They have no regrets as long as they are belching and satisfied for a day.

I have no choice (and regret) but to liken such a disastrous clan of hyenas to the current government of the National Resistance Movement (NRM) which has been in power for the last 35-years, and led by one and only visionary leader, Gen Yoweri Museveni.

Just the other day, the minister of Education, Janet Museveni, who is also Museveni's wife offered herself and her husband as the champions against the corruption that has retarded the development of this great nation. Oh lord save me. The duo should have offered themselves as sacrificial lambs by resigning from their respective offices.

I do not know whether these two love birds know exactly the meaning of corruption, but for the record, if they read this newspaper, let me help them describe corruption and they will see that I am describing who they are.

Morally, a corrupt president is someone who dishonestly does things in return for power. This doesn't need explanation in relation to how the president has consolidated power for the past 35-years. Things throughout the years speak for themselves.

Legally, a conduct intended to secure a benefit for oneself including but not limited to bribery, extortion, and the misuse of inside information amounts to corruption. There is overwhelming evidence to support this and even if I am called to court, I can proudly present it without an attorney.

Pursuant to the Anti-Corruption Act 2009 (Act 6 of 2009), the duo crusaders of anti-corruption will notice that the law clearly describes their real character as inexcusably corrupt:

"The acceptance, directly or indirectly, by a public official, of any goods of monetary value, or benefits, such as a gift, favour, promise, advantage in exchange for any act in the performance of his or her public functions" - amounts to corruption.

I do not need to remind you, Mr. President, how many times you have offered or received material benefits before and during elections with the intention to patronize and co-opt the electorates into voting them back to office. By the way, you received a bribe or call it a gift from Patrick Ho, a convict on corruption charges in the USA courts and you are currently an exhibit number 1510 in the same court.

"The offering to any person who asserts or confirms that he or she is able to exert any improper influence over the decision making of any person performing functions in the public or private sector in consideration of the undue advantage"  is corruption.

Mr. Museveni, how many times have you influenced parliament with money to amend the constitution in your favour? Do you not know that such acts amount to corruption contrary to the laws and standard morality of Uganda?

Neglect of duty is corruption. You have neglected your duty as president of this great nation and it is, as responsible citizens, our legitimate expectation to expect you to be dutiful, but you have been negligent so I wonder where you gather the gumption to begin a crusade against corruption when actually you and your entire government stink malodorous corruption and maladministration.

Lastly, Mr. President, you love the corrupt so much that you keep appointing them as your disciples. Have you forgotten the adage that birds of the same feather flock together? You re-appointing the corrupt is symbolic of how it is hard for you to distance yourself from them and their baggage of corruption.

The writer is a novelist

Besides corruption, their additional characteristics are easy to identify: incessant lying, using relatives and friends as fronts to cover up the corruption loot, the propensity to grab land with impunity, they are scared stiff of any change of the status quo, etc.

Obviously, this clique and their entourage cannot survive outside a corrupt ecosystem - in Uganda. However, at some point something will give.

In the long run, corruption is unsustainable however "smart" the perpetrators. In other words, the end of the road for them is inevitable. It is like death - it is coming, sooner or later. No ifs or buts.

And you know what - Ugandan Citizen X will have the last laugh and restore sanity, and get back what was taken from him or his ancestors. It is written and so shall it happen. Many famous verses in religious books ominously say so.
Report to administrator