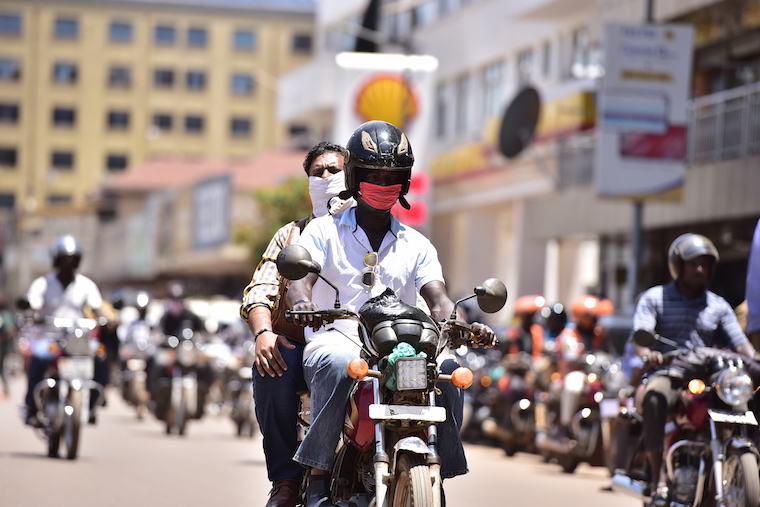 The traffic situation in Kampala has become a matter of life and death.

The boda boda have decided to take matters into their own hands in terms of justice. This is scary because instead of analyzing the case of perhaps an accident, they instead resort to violence and mob justice.

Most of the traffic consists of boda boda riders of which, lately, there’s basically just a lane of traffic jam consisting of boda bodas. Most Ugandans opt for this means of transportation not because it’s the safest but because it’s cheap, fast and can outmaneuver the crazy traffic jam around Kampala.

But with the recent cases of violence of boda boda riders, one starts to wonder whether it’s safe to drive on the streets of Kampala without engaging in a dispute with a boda boda rider. Not only are they reckless on the road, but also rude.

The boda boda riders often have a sense of brotherhood for one another and can easily gang up against car drivers. For example, the unjust killing of Aziz Bashir, who was a former driver with United Nations.

The gentleman was lynched by a group of boda boda riders in an incident triggered by a minor road accident at Mengo. Not only did they take his life, but also vandalized the car. I sometimes wonder if there is any shred of humanity amongst Ugandans.

The Inspector General of Police Okoth Ochola ordered the director of Traffic and Road Safety to carry out what he described as an aggressive type of traffic enforcement, targeting indiscipline and erratic boda boda riders.

Hopefully such measures will be effectively implemented and I generally pray for road traffic ethics to be followed by Ugandans.

And in the case of boda boda riders, government has to find a way of reducing the number of riders on the streets to curb the spike in road accidents, as well as promote security since boda bodas are now being misused and pose a security threat.

Let’s do more on vaccine education

As we are still dealing with the implied forceful vaccination, we have seen a number of institutions deny Ugandans services for lack of a vaccination certificate.

Also, some staff have been sent away. It may be looked at as a push factor to ensure Ugandans vaccinate against Covid-19 but we need to take a holistic approach to this issue. We should also allow room for debate on vaccination because this will promote awareness in the long run.

Much as the government is putting a lot of emphasis on calling upon Ugandans to get vaccinated before fully opening up the economy, it is not enough to just “call upon.”

By October 14th 2021, not more than 450,000 Ugandans had fully vaccinated which is only 0.9 per cent and about only 2.3 million had so far received the first jab, which is about only 4.9 per cent. To reach at least 7 million fully-vaccinated Ugandans, government will need to make more effort.

There are several myths around the vaccine that Ugandans have embraced as gospel truth and no amount of announcements will change this. It requires deliberate education of the masses.

Further, the vaccines need to be brought closer to the people. For instance, one in Kangulumira has to go to Kayunga (21km away) to get the vaccine. How will the entire population of Kangulumira get to Kayunga? Who will cater for their transport?

I am sure there are a number of places that cannot access the vaccines even when they are willing. Let us not blame Ugandans all the time, they need to be educated and listened to.

A number of years ago, the government of Uganda came up with a proposal of rural electrification, which aimed at extending and making electricity accessible mostly in rural areas.

It is important to note that electricity is an expensive utility which many people in rural areas cannot afford. It is also noted that the Ugandan government has invested more in hydro electric power than off grid solar power.

It’s important to note that without electricity, many communities struggle to obtain the resources necessary for their daily living such as hospitals, schools, employment, food, among others.

Further, before the program, many activities such as deforestation, dirty fossil fuels such as oil and gas, disposal of broken glasses from lamps, bush burning, among others, were a great threat to man and environment.

Extending electricity to rural areas will help fight poverty and laziness, and create employment opportunities among the youth and women. This is because it will help to increase efficiency and effective productivity by extending their working hours.

Clamour for change is misguided

During the recent presidential campaigns, President Museveni made a casual remark that those clamouring for change have nothing to offer because their slogan for a better or new Uganda has been guaranteed by NRM revolution.

At first, I dismissed that as an expedient politicking but on deeper reflection, I realised the President was right. NRM salvaged this country from a state of hopelessness; the economy was in the doldrums, the politics was chaotic, insecurity was rampant, civil servants spent months without getting their salary, name it.

The best yardstick to vindicate the president is to focus on politicians that purport to oppose NRM.  The ideology that drives the various opposition tendencies is unclear.

When FDC evolved from PAFO, its agenda was to restore the country’s democratic credentials; purporting that NRM had veered off from its fundamental change vision.

The leaders rode on the wave of passion for change with some people who joined the chorus for change. But as the realisation of change procrastinated, cracks began to form at the top echelons of the party structure because the ambitious party leaders were impatient, ready to be courted by NRM.

A drove of DP leaders, especially from Buganda, abandoned DP and joined National Unity Platform, whose ideology they do not know. As is obvious, DP could not serve their immediate ambition.

However, the most interesting scenario played out in the FDC camp, which suffered a double jeopardy having ceded its space to NUP. Hon. Betty Kamya left FDC screaming that her personal interest to be appointed chairperson of the party was shortchanged. Amusingly, her secret courtship with NRM was in the public domain.

Evidently, the so-called change the opposition is shouting about is simply an empty sloganeering. They should all have joined/remained in NRM and realigned the political forces through dialogue. The population that has been following these capricious politicians is left confused and they realise that NRM has all along been providing scrupulous stewardship.