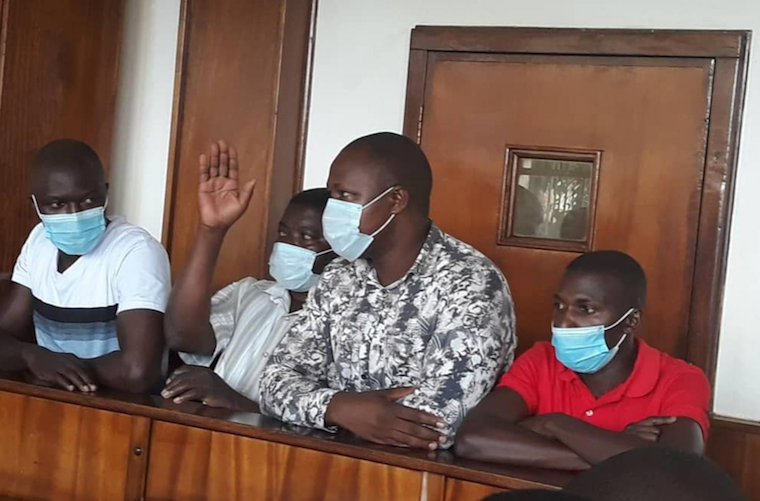 More than seven years ago, Retired Justice Patrick Tabaro offered this interesting perspective about the need for bail. In light of the current debate over the same, we reproduce this opinion.

Under the law of Uganda everyone who appears before a magistrate’s court is entitled to be informed of his rights regarding release pending trial, on certain conditions.

After trial, in case of conviction, the accused may also be released on bail pending appeal. The High court has discretion whether or not to grant bail to anyone appearing before it. Although in case of grave or capital offences it is difficult to secure bail, there are statutory time ceilings after which bail becomes mandatory.

The law leans in favour of granting bail, a matter that has generated controversy between the executive and the judiciary. It is my intention to look at bail as an integral part of fair trial. A historical background to trial is quite pertinent.

The earliest trial known to man is the ordeal which took many forms, such as subjecting the suspect to hot objects, poisons or immersing in water. Two forms of ordeal, from Europe and Africa, highlight the practice and clearly bring home the need for a scientific approach to the issue.

In Britain, under cold water ordeal, a suspect was put in a river or pond. If the accused drowned he was adjudged innocent; if he floated he was guilty. Under this form of trial, either the accusers won or the accused lost, as Northcoters, now Nsibirwans of Makerere University would put it. It was a travesty of justice.

In pre-colonial Buganda, to determine whether a suspect was innocent or guilty, amadudu plant leaves were fed to the accused; if he fell sick, he was guilty and if he did not fall sick, he was innocent. It appears, however, that in pre-colonial Africa witnesses were also heard to determine innocence or guilt. This is explained by the Luganda maxim, omusango omukadde gwegusala omugya”. The meaning is; an old case is handy in resolving a new one.

The judges went by precedent. In my research in Kisoro district, formerly Bufumbira, which until 1909 when the British incorporated it into the Uganda Protectorate, was part of Rwanda; I was informed of a peasant who killed a chief. The peasant’s case was ultimately brought before the king. After hearing the evidence, the king acquitted him.

Trial by ordeal was abolished by King Henry III (1216-1272). Thereafter, people, especially neighbours who knew the suspect, could come forward and swear to his innocence or otherwise, signalling the beginning of trial by jury and calling of witnesses.

Although this was a great improvement on trial by ordeal, this development was still in the context of the feudal order. Even the Magna Carta (the great charter) 1215, which curbed the king’s power to act arbitrarily vis-a-vis liberty and proprietary rights, was a matter between the king and nobility. Subsequently, the rights under Magna Carta were extended to ordinary Englishmen.

The crucial period in the history of fair trial is also the period of democratic revolutions in Europe. John Milton’s cry in Paradise Lost that it is better to reign in hell than to serve in heaven underlies the craving for liberty and democracy by the middle class against the king and the nobility - freedom from arbitrary use of power, freedom of movement, assembly, conscience, free speech, etc.

John Milton served under Oliver Cromwell during the 1640s civil war and the period England was governed as a republic. However, the most dramatic demand for free fair trial was made during the Great French Revolution, 1789. One of the battle cries was a demand for a public trial and more significantly, the universal declaration of the rights and the citizen provided, inter alia, that everyone charged with an offence shall be presumed innocent until proven guilty.

Incidentally, the belief among the public that under French (civil) law an accused is presumed guilty until he proves himself innocent is without foundation. It is a popular but mistaken belief. In all civilised jurisdictions as far afield as Brazil, Africa, North America and Europe (France, Germany, Belgium, etc) presumption of innocence is a cardinal principle of the legal system.

In Uganda, presumption of innocence is a constitutional provision. Let us bear in mind that remand entails loss of liberty – it is in essence imprisonment before trial and needless to assert, there are many innocent persons who are arrested and prosecuted. The law of bail is meant to protect such people.

In deciding whether a suspect should be released on bail or not, the court takes into account several factors, especially the gravity of the charge, exceptional circumstances, e.g. sickness, tender age of the suspect or extreme old age referred to as advanced age in our laws.

Prior to the 1970s, the rule in Uganda was that bail in capital offences was available only in very exceptional circumstances. However, prison congestion and delays in trying suspects necessitated prescribing constitutional and statutory maximum remand periods after which suspects are entitled to bail.

Of course the ultimate answer is to ensure that suspects are tried fast without delay. Delays are caused by lack of personnel, scarcity of resources for movement of investigators, state attorneys, magistrates, judges and witnesses. But the bottom line is that bail is meant to guarantee the liberty of  innocent suspects.

The author is a retired judge