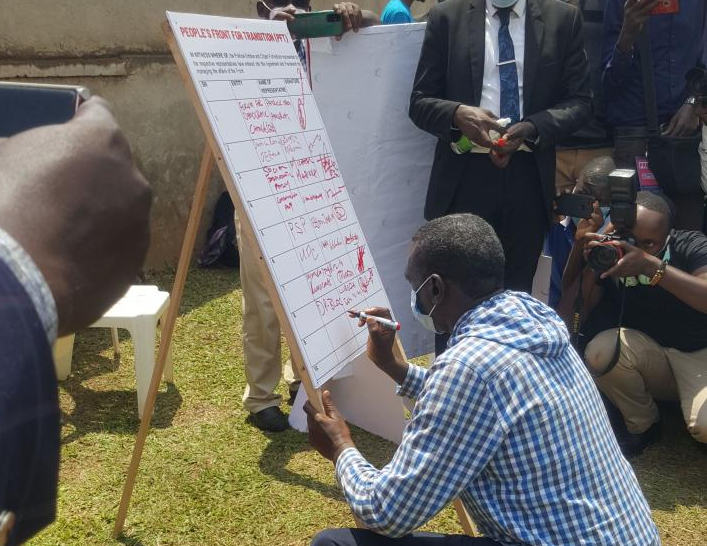 After several months of complete silence, the Forum for Democratic Change (FDC) came up with a red card campaign, a commodity that has failed to trade in the Ugandan political market.
Immediately after launching it, criticism began on social media hence forcing Dr Besigye Kizza to swing into action. I actually read somewhere in the news where Besigye was requesting Bobi Wine to tame his supporters to slow down, seems the boys were taking him on at a high speed.
Similarly, while on NBS TV recently, Ibrahim Ssemuju Nganda the FDC spokesperson requested the youth to respect his boss Besigye because, in his own words, Besigye is an old man who deserves respect.
I don't know which kind of respect he was demanding for but I guess he was requesting that the criticism which he is facing online should stop. Also, Patrick Amuriat Oboi former FDC presidential candidate went to Twitter to throw in some defense in an effort to create a safe landing for the new project.
However, as usual the online red ants of NUP gave him a tough time with lengthy threads of negative comments. One of the youth on Facebook, cracked a joke and said that "How do you remove a government by a mere showing of a red card?" - a comment that gave his followers uncontrollable laughs.
There's a common saying in my local language that "Wayororera empiiri mumasinde erakurya" - meaning that when you rear a snake as a pet, it will eventually bite you. Members of NUP are old boys of FDC and more interestingly, they were mentored by Besigye during his struggle of street demonstrations.
There was a time when FDC had taken over internet that no single person in support of the ruling government would post something and get any positive comment. Later, Bobi Wine came and took over the army which Besigye had mentored,  re-trained them and reenforced them hence becoming very fierce and dangerous to both FDC and the ruling government.
However the game becomes more interesting when the boys swing into action and take on their former commander without any fear forcing him to plead for mercy. They have named him all sorts of things and actually most of them call him "a faded politician" with nothing new to tell them.
FDC having failed to win them back, have now created a lame excuse that the oppressor is using some of the oppressed people to oppress them. They have completely failed to understand that the red card campaign has hit a snag and completely failed to trade in the Ugandan political market, so maybe they should change the brand or completely get out of the business.
When NTV sought the opinion of the political analysts in one of their recent evening bulletins, none of them was in support of Besigye's campaign. In fact, one of the analysts said that the opposition should be focusing on going to the grassroots to mobilize than engaging Ugandans in the red card campaign
Rejection is very brutal and it hurts more when you're rejected on first sight. It means there's something lacking in you and therefore you should struggle to make yourself better so that maybe next time you be accepted and avoid the embarrassment that comes with being rejected.
The online criticism of the red card campaign and from the main opposition party should be an eye-opener to the so called leaders of the campaign, further embarrassment will follow if they don't take it seriously.
The writer is a deputy RDC Kyenjojo district

0 #1 kabayekka 2021-10-23 01:35
This Uganda opposition continues to underestimate its value. Some of these members had come out to listen to the people of this country.

They had started to formulate the International Criminal Court petition but the brutal military police of Uganda managed to stop them.

Instead of seeking help from the people of Uganda in the diaspora the opposition went into overdrive and decided to participate in another rigged election of 14th January, 2021.

Now that they are cooking their heads once more, it is high time the Ugandan Exiles started to formulate a fund so that the best lawyers are hired to proceed with the processing and posting of this very important international legal document to the ICC in the Hague in the country of Netherlands.
Report to administrator
0 #2 Akot 2021-10-23 18:06
There is no opposition against Museveni, but will be the moment there is just that ONE National Leader calling for an end to the tribalistic system & to UNITY of Ugandans!

Until then, opposition leaders are playing/laughing at Ugandans & non will ever replace Museveni who holds Ugandans by the balls through the tribalistic system!

Why are so called opposition leaders so bent on legalising Museveni with yet another fake election, then bolster the fake democracy with parlimantary elelction?

Will 40 years not be enough & Museveni must be legalised to ensure his 45 years, then fake opposition leaders will still be happy preparing next fake elections to ensure Museveni's legal post for 50 years?
Report to administrator