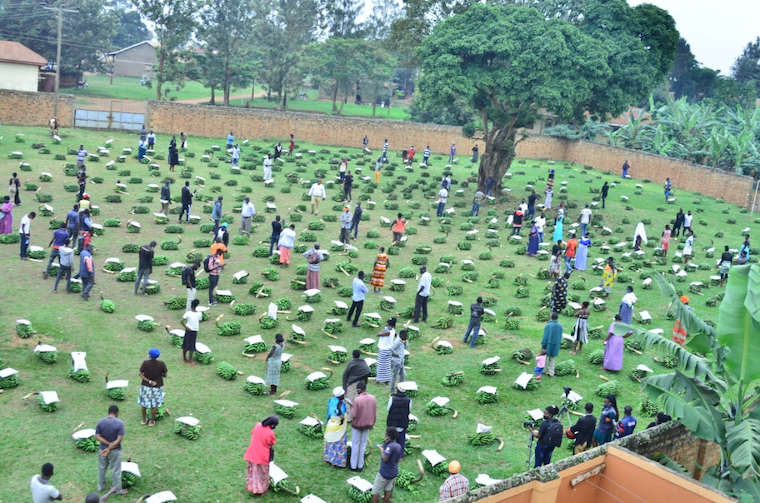 The truth is, Ugandans will never get angry enough against this rogue regime if we keep expecting crumbs from members of parliament instead of demanding for functioning systems of government where service delivery is efficient.

We expect our MP to do what they are not supposed to do and they also take advantage of it to patronize us which stagnates the struggle against bad governance we are enmeshed in.

While the youths in Ghana refused relief from politicians and demanded better, we have been taken for granted here and made comfortable in patronage instead of standing our ground to demand sustainable solutions.

These members of parliament whether opposition or National Resistance Movement that are giving out food relief and other items to the poor in this pandemic, it is not that they do it wholeheartedly as they want us to believe, it is rather another way to co-opt or patronize electorates for the next election.

If you think otherwise, why do you think that after losing the election, the ambulances they buy for the constituency aren't left for the people but they take them back? This means that they do these things to patronize voters just like Gen. Yoweri Museveni does with hoes and envelopes forking out to the people instead of establishing strong and independent institutions that work for the people without discrimination on political opinions.

You see, no one has given food relief silently; they all move with cameras and parade themselves giving food and also post on their social media in order to attract publicity - to publicize their purported humanitarian efforts whereas not. In other words, they do it for publicity purposes such that when they are seeking another term in office, they use philanthropic history as a bait to attract voters because one who knows your stomach, knows you very well - goes a Ruhororo proverb.

I recollect during my first year in law school, we studied a course unit called Law and Development. Under this module, we were taught and we succinctly learned the relationship between Law and Development or how law can be used to cause sustainable development in a poor country like Uganda or lack thereof can plunge the country into an abyss of impoverishment.

Back to the issue, pursuant to article 79 of the constitution of the Republic of Uganda 1995 as amended, the role of parliament is to make laws. It provides that 'Parliament shall have power to make laws on any matter for the peace, order, development and good governance of Uganda'

Why can't these MPs use their capacity and authority to make laws that task the government to feed people in this time of the pandemic? Just like Gen. Yoweri Museveni has benefited from the poverty of Ugandans, MPs too have benefitted in equal measure since all they have to do is to keep buying food for their constituents in order to co-opt them for the next term of office.

What they are doing, turning into philanthropists when they are supposed to be legislators is total abuse of office. You and I may agree that if these honorable MPs were not worried about the next election, they would not be patronizing constituents with posho and other relief materials while masquerading as philanthropists on cameras.

As Dr Kizza Besigye said recently if the colonialists were able to use the law to force every household to have food reserves and government food reserves at a regional level, why can't this government do the same?

All they know to debate about is what they can also steal from the government including the things they can afford to buy for themselves. With all the amount of money these honourables earn, it is embarrassing that they cannot buy for themselves a vehicle such that the government uses money for other basic things like buying vaccines for Ugandans.

While we thought that they are searching for what they can do for the country as far as useful legislation is concerned, they join parliament to draw salaries from the government as they fight to retain their seats with zero record of good laws. See they even kill, bewitch and blackmail each other in order to join parliament.

If your member of parliament has brought you food relief in this pandemic, just know that he has failed his duty as a legislator. Elsewhere in other countries, the legislators are debating reducing taxes and giving stimulus packages in form of enough cash to all their citizens in this pandemic, and ours are busy approving the imposition of burdensome taxes on the already poor and struggling citizens. If at all they looked on as the government suggested a picayune Shs 100,000 to struggling households which also didn't reach?

The best relief these masqueraders would have given to Ugandans is to ask the government to channel the money for cars to buy vaccines. See them, your philanthropists becoming penchants of opulence amidst this pandemic when we need money.

+6 #1 Godwine Muwanguzi 2021-07-28 10:00
Kakwenza you are very right, there is no single politician(those in offices) who have given to their people without cameras and journalists.

I believe they are doing this as a future point of reference. It is so sad, and that is the trouble with our country Uganda
Report to administrator
+5 #2 Ashirafu Wamala 2021-07-28 11:04
Ugandan MPs are the only species that would cut down trees, make paper out of them, and then write "save the trees" on it.

And remember in everything, there's a share of everything.

Ugandans shall keep undermined till we realise all we need is better governance, good laws, quality service delivery, liberty, freedom and independence than relief food.
Report to administrator
+6 #3 Fancy Hilda 2021-07-28 11:28
They have made Uganda their own and have excluded the ordinary people.

Everything they do is just for their own personal gains. It is such a shame.
Report to administrator
+3 #4 Akao 2021-07-29 20:29
You are spot on! They absoulutely do it with the intention of preparing for next election.

Unfortunately people in Uganda do not see that as a way of controlling them by these MPs. People just accept it as the norms. The same reason MPs have to attend almost every funeral in his/her constituency.
Report to administrator
+2 #5 Remase 2021-07-30 14:37
Kakwenza, let ask a strange question, why is it that you don't appear in print but only online? Your articles require to appear in both.

The problem is, politics in Uganda has become a way of earning a living rather than serving the nation. Therefore our MPs' interest is not to be a functioning institution but getting paid the big bucks for doing nothing!
Report to administrator
+1 #6 Kigula Mugambe 2021-08-02 10:02
It seems, you have just come to Uganda. Opposition MPs make laws and policies, but even passing them is hard.

And even if they are lucky to pass the president refuses to sign them. If he signs them, the government deliberately doest implement them.
Report to administrator
0 #7 Ibra 2021-08-06 01:29
I’m a great admirer of Bwana Kakwenza for his brave criticism of the regime regardless of the torture and illegal detention, and look forward to reading his books on Amazon once published.

I would however disagree with his analysis here of the donations especially by the opposition MPs who have experienced this hardship and now wanting to help desperate people facing starvation.

What he is saying can only work in a democratic system where MPs or indeed ordinary people can lobby a government to change its mind.

And what springs to mind is the Man United striker- Marcus Rashford who drew on his own experiences of growing up to campaign on child food poverty, most notably forcing the British government into a U-turn on free school meals over half-term holidays last year. Full marks to Mr Update and Bwana Zaake for extraordinary generosity as one wouldn’t expect much from a brutal regime!
Report to administrator