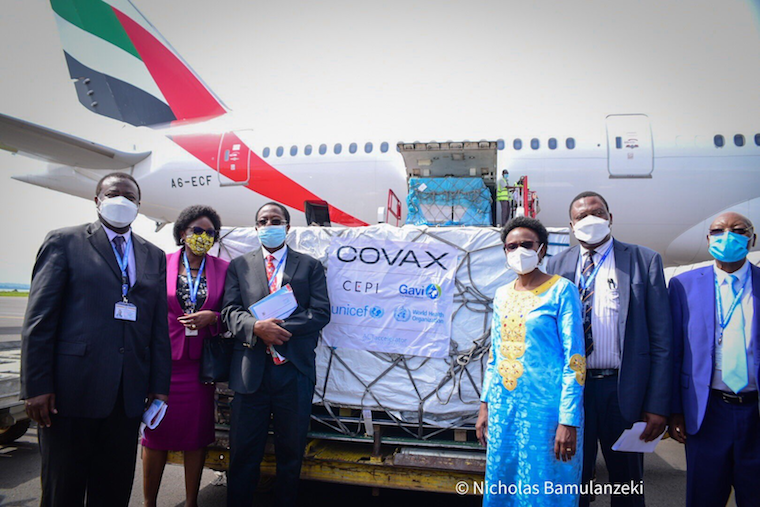 Covax vaccines on arrival at Entebbe

Declared a global pandemic in March 2020, the novel coronavirus (COVID-19) outbreak is seemingly becoming an accelerator of inequalities at all levels, most notably the access to vaccines between the rich and poor nations.

In Uganda, the second wave has radically exposed the vulnerability of our health systems and the challenge for especially the poor to access critical medical care in the face of very high, unaffordable costs.

A number of world leaders like Emmanuel Macron are pushing to change the status quo and are mobilizing for international solidarity in order to bridge the widening gap between the rich and poor nations.

An ardent advocate for multilateralism, President Macron has made several attempts to rally the international community in favour of the poorest countries, especially in Africa.

The French president was among the leaders who played a key role in support of the establishment of the Access to COVID-19 Tools (ACT) Accelerator partnership that was launched in April 2020 by the World Health Organization and partners.

Challenges notwithstanding, the ACT-Accelerator has been able to support one of the fastest, most coordinated and successful global efforts to develop tools to fight a disease. With significant advances in research and development by academia, private sector and government initiatives, the ACT-A initiative is on the cusp of securing a way to end the acute phase of the pandemic by deploying the tests, treatments and vaccines under the covax facility.

Macron used the French Presidency of the G7 to push for this agenda. At the G7 summit last February, he called on Europe and the developed countries to allocate 4-5% of their Covid-19 vaccine stocks to the Covax facility for the benefit of the poorest countries, especially Africa which is facing the challenges of access and affordability.

For Macron, a multilateral approach is the only response to the current world public health emergency. The French President urged the pharmaceutical companies making COVID-19 vaccines to transfer technology abroad so as to accelerate global production while stressing the need for transparency and regulation of the pricing and castigating the tendency towards excess profits based on scarcity of the vaccine.

President Macron also called for support in favour of African institutions like the African CDC and the network of Institut Pasteur that are essential in identifying and containing the risks of variants.

At the COVAX AMC Summit held last June, France announced a new 100 million euro support towards the Covax facility. A month earlier, France had pledged €500 million to support this facility which seeks to achieve an equitable access to vaccines in the whole world, especially for the poorest countries.

Leaders at the COVAX AMC Summit estimated that developing countries would need nearly two billion doses of vaccines by the end of 2021 in order to protect at least 20% of their populations.

Since the first dispatch of vaccines under Covax in February 2021, more than 72 million doses have been distributed in some 126 countries of which 74 are low-income and middle-income countries.

At the G7 summit in May, President Macron announced that France would double its contribution of doses to Covax from 30 million to 60 million doses by the end of 2021.

Together with team Europe, France has been contributing to the Covax facility since its creation and for the benefit of vulnerable nations. France hopes that vaccines will become a global good with WHO and WTO at the centre of the Covax mechanism.

Uganda has so far received slightly over 1 million doses of vaccines under the Covax facility, including the 175,200 doses received last month from France.

At a bilateral level, the French government has supported the Ugandan army with over 50,000 litres of alcohol-based hand sanitizers worth a half a billion shillings in June 2020. The Makerere University School of Public Health has also received €15,000 from the French Embassy to support the development of simple, rapid, low-cost Covid-19 diagnostic tests by a team of scientists led by Dr Misaki Wayengera.

The government of France has again just donated an assortment of items worth nearly 3 million euros (over Shs 12 billion) to boost Uganda’s response to the Covid-19 pandemic. The items being received by the Uganda Medical Stores include one million FFP2 face masks, 54,600 antigen testing kits and 9 Osiris3 respirators.

South Africa, Algeria, Tunisia were the first to experience the virus as their population compose many +56 year old.

Europe/USA experienced thousands of deaths as their population is +60% +60 years old!

Ugandans are in hot waters as population is +70% -35 year old, so if Museveni is not thrown out, he'll get richer while young population will fall to Covid-19 variantes!

Ugandans have 2 viruses now; Museveni & Covid-19, right?
Report to administrator
+1 #2 Akot 2021-07-26 14:43
Covid-19 should wake developed world up! They MUST stop giving money/donations/help to shitholes, if they want to help the +80% of population who have no public/social services, but useless rulers/dictators will be assured of more money!

Developed world have had at least 5 different leaders in 35 years, yet they waste their tax payers money on the Musevenis who rule people without public/social services, does this make sense?

Why are developed world still members & financing UN that supports dictators/useless rulers, thus ensure miseries of millions whose only chance to living is migrating to developed world?
Report to administrator
+1 #3 Akot 2021-07-26 14:59
COVID-19 is chance for Museveni to receive more money, yet, not even United Nations sees it as him & family, tribal leaders, useless mps, ministers are safe!

But of course it's majority poor Ugandans keeping Museveni in post through the tribalistic system, so UN has excuse in turning blind eye-dead ear to TRIBALISM in Uganda!

20 years of war in Afghan, USA woke up & is pulling troops out, but the great country must says NO to UN for supporting dictators, useless rulers, in shitholes!

When will USA/UK/EU wake up to ensure their money is put to good use through good rule in shitholes?

35 years+++& it's Museveni controlling donations given to poor Ugandans!
Report to administrator