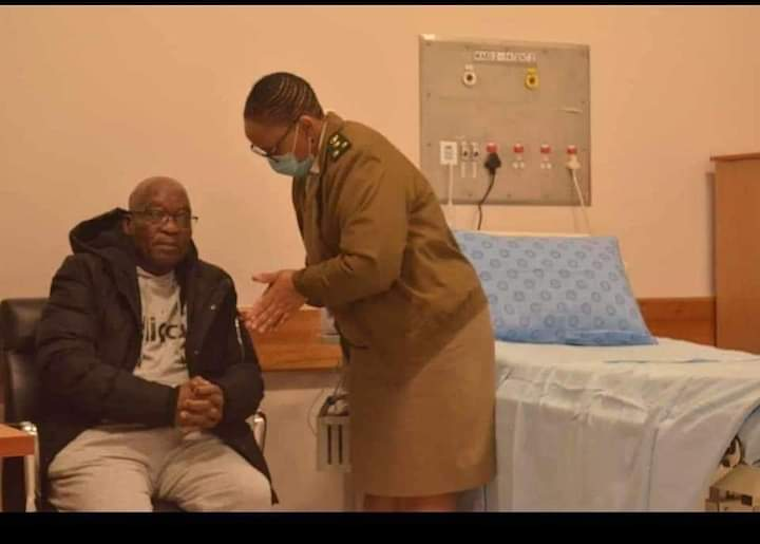 Jacob Zuma being briefed by a prison warden

I have been following conversations on social media and in mainstream media from the time when the former South African President Jacob Zuma was put in prison over contempt of court.

Thereafter chaos erupted in South Africa and there has been looting of property and several people have lost their lives. Before that, a few years ago, there were cases of violence where South African nationals attacked and killed some people they thought had origins in other African countries.

That was not only shameful but embarrassing for a continent that has complained about colonization and imperialism of the Europeans. Whenever I compare those two events, I almost conclude that there could be a power vacuum somewhere in South Africa that ought to be filled as soon as possible.

Everyone should be yearning to go to South Africa for tourism and for education to learn a thing or two about their history especially during the dark days of apartheid.

While in school we read novels and also studied history about South Africa and I have also accessed music and other documentaries about the shabby events of apartheid. However it appears after the apartheid, South Africa seems to be painting another image that will be seen by the world.

I'm sure if we continue like this, South Africa as a country might end up rebranding to yet another shabby sculpture. Of course, we shouldn't forget the dramatic parliamentary sessions of their parliament that have now turned into comedy skits for some people to watch on the internet.

It could be true that the former South African president has a case to answer, but I feel there could be a way of handling that matter by not putting him in prison and thereafter spreading the images of him in cells on social media. That could be the reason as to why people were annoyed hence thronging on streets.

If the incumbent presidents have immunity against any form of prosecution then how about former national leaders?

In any case, for me, I think, someone who has ever been a president should be treated with that same esteem. I think that's why in some countries like United States, their former presidents continue to enjoy privileges that they had while they were president including remaining with security and being addressed as president.

Democracy was imported to Africa but Africans now want to use it more than its owners and they want to show that they understand it better than those who brought it.

Interestingly,y they're ending up embarrassing themselves and it's a huge shame to us as a continent. Some of these things we do in the name of democracy and other policies show that we are still mentally colonised. It's as if we think and do things on remote control of foreigners who were here many years ago and who left a shabby image on our continent.

The writer is a deputy RDC Kitagwenda district.

In my view, the purpose of putting Zuma in jail was to illustrate that the the Judiciary is an independent body, capable of taking to task the highest office / individuals in the country.

If the law says that contempt of court results in a prison term, than that is what should be applied. I do not think that there is a paragraph that reads "unless the person displaying contempt is a high ranking ranking official, then prison sentence doesnt apply". He did the crime, he pays and does the time.
Report to administrator
0 #2 Zaitun 2021-07-26 17:56
"Democracy was imported to Africa but Africans now want to use it more than its owners and they want to show that they understand it better than those who brought it."
What rubbish are you telling us?

What exactly do you call democracy? Are you sure of what you are telling Ugandans or you simply as the deputy RDC Kitagwenda district, would want us to believe in what your father, Museveni is doing? Are protecting his undemocratic leadership?

If you do not know, Democracy has ever existed in Africa, above all in Uganda. Take the former Kingoms or chieftaincies- these were all ruled according to democratic principles.