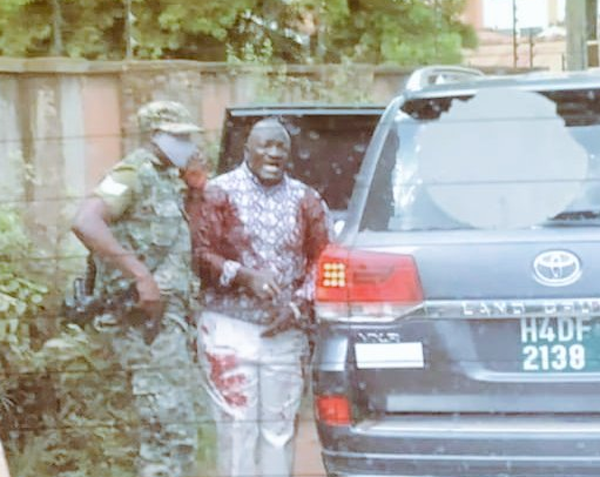 Gen Katumba Wamala crying over the death of his daughter

The most reliable way to know one’s character is not when they are at their best self. Rather, it is when people are faced with extreme adversity that their true character is revealed.

Anyone with a deservedly four-star general status will have gone through several challenging situations that are beyond an average civilian’s wildest imagination, including several near-death situations.

However, there is arguably no better description of a tragedy than losing a dear daughter and driver - to bullets that you know were meant for you. Meanwhile, all this happens when you are on your way to a mother in-law’s vigil.

Anyone who has met general Katumba in person will vouch for his charitable, caring, parental, merciful, generous, developmental, jovial, playful, prayerful, and loyal character. Many have confessed to receiving free agricultural advice, seedlings, and young animals from some of General Katumba’s farm.

Precisely, Katumba can easily pass as a “Mr. Nice.” One major trait that has stood out as General Katumba continues to grieve and traverse through some of the most difficult days of his life is a very strong sense of positivity. In moments when many would have expected him to get more inward and focus on his life, he has continued to send out appreciation and encouraging messages to family and friends.

As a four-star general, the least guarantee that he would expect from the state is his security and that of his family members.

One would, therefore, expect him to sound furious and spit fire over the state’s failure to protect him and family as it was clear by even his own admission that it was God who gave him a second chance. Also, it is not that he totally does not have any suspicions over who could have attempted to murder him.

Instead of sending out any threatening messages, he has appealed to God for justice. Yet, through words, actions, indifference, gloating, mockery, irony, satire, sadism, dark humour and “loud silence” from sections of the public, Gen. Katumba has not afforded a peaceful grieving period.

Unfortunate for Gen. Katumba, the worst tragedy of his life has happened at a time when the country is still coming to terms with one of the most, divisive, violent, deadly, highly contentious and disputed general election - an election that has irredeemably injured several institutional and personal relationships.

Just like many in his position, Gen. Katumba’s indulgence in the recently concluded elections hone a very bad light on him. It is, little wonder, therefore, that a certain section of people is mourning his loss in a manner that the Baganda would call ‘okusekera mu kikonde nga aziika mujja we’ to roughly mean hiding a smile or laughter behind a clenched fist just like a woman who is burying her co-wife.

The Baganda further say that, ‘enziza y’emisango ekyukanisa enamula’ to roughly mean that the way crimes are committed determines the nature of their judgement. They further say that ‘kiiso kyambuzi kilekelela eyasse, nekitun- uurila obukodyo bw’abagga’, meaning that the eye of a slaughtered goat focuses on the one who removes its hide and cuts the dead goat into pieces, instead of focusing on the person who killed it by cutting off its neck.

However, in the long run, the public is always going to remember the individual actions, words and the loud silence of each individual actor, at a time when their words, actions and loud silence could have mattered the most during the build up to the 2021 general elections.

For everyone to regain the mundane rights and privileges to basic courtesy and pleasantries, it seems to me that perhaps some introspection and a genuine national conversation on the post 2021 general election recovery and healing process needs to begin as early as yesterday.

Otherwise, in the meantime, if Uganda is to sing for us all again, we must all resolve to always speak out in a chorus-like voice and tone, whenever any form of injustice is meted to anyone, regardless of which religion, geographical region, political party affiliations, tribe, and social status that one belongs to.