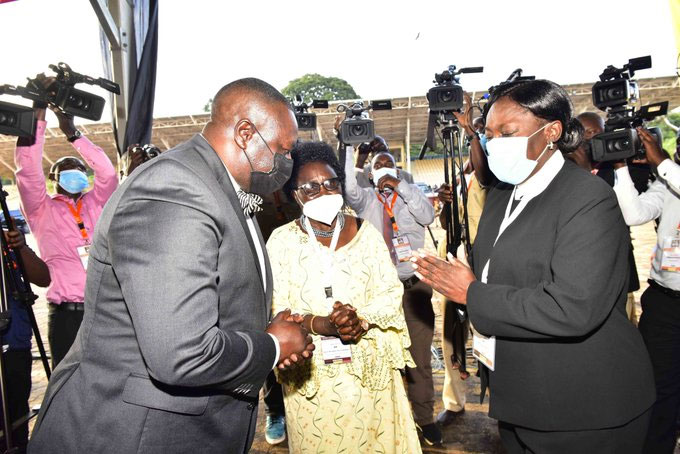 Rebecca Kadaga congratulates Jacob Oulanyah upon his election as speaker

There is one single truth about Museveni's former partners-in crime falling out with him: they had become good people with heart for country.

Even in the worst cases such as Amama Mbabazi, falling out with Museveni—or simply having a tough public exchange—means reform. However personally selfish one might be, if they fall out with Museveni, it means they exhibited flashes of generosity towards the “wretched of the earth.”

However small. And the inverse is true: only those whose hearts are in their stomachs—singularly focused on personal gain—become friends with Museveni. And so are those keeping the friendship. Museveni’s is singularly a transactional friendship.

So, against that sobering theoretical position of mine, I come here to celebrate Rebecca Kadaga, not to dance on her grave. [In fact, she didn’t die but, rather, liberated herself].

That Museveni hounded her for over five years should speak to her goodness, and not her personal selfishness. Never does life offer a person such moments to take charge of their legacies late on as it did for Kadaga. She grabbed it, and defied the ragtag General.

Indeed, by openly defying Museveni—at an opportune moment such as the 2021 speakership race, contesting as independent—Kadaga openly invited Ugandans to re-review her political record, especially as speaker of parliament, outside of the noise and ugliness of being associated with NRM. [If she crowns this with rejecting a VP offer, if Museveni still came dangling it, the annals of history will be filled with her praise].

The question should be: why did Museveni and co. fight her this much?

At the end of the day, Ugandans will sit back and wonder how they missed watching and cheering Kadaga’s positive struggles;
her many fights with Museveni and his untouchable marauding friends? How did we miss them? As if waking from a long drunken stupor, we will shake and chasten ourselves, “oh, yes, she belonged to the wrong party. The ugliness of that label blinded us!”

I know, many seemingly progressive elites in Kampala are still dancing and celebrating Kadaga’s “downfall” and sanctimoniously pontificating about the goodness of humility and humbleness. This is all shallow. Perhaps it was her character, brazen and outspokenness that whenever she took sides with her party — as her position principally demanded — we made it look like the work of an individual.

She was made squarely responsible, and sometimes, she actually also claimed it - for political mileage within her party. The most spectacular being the removal of the age limit for presidential candidates from the Constitution, the Covid-19 cash bonanza to MPs, and the passing of several multibillion supplementary classified budgets.

But while I acknowledge this anger against Kadaga, I find it outright shallow and simplistic. First, Kadaga’s critics forget that she belonged to NRM, and she was only speaker on the blessings of her party. Kadaga’s original sin then was belonging to NRM, which actually means taking oath of Museveni’s infallibility and to serve him unreservedly.

In fact, if Kadaga were a member of the opposition, she would never have become speaker. Second, I do not understand why Kampala’s talking heads act surprised when NRM members engage in abuse of office. I thought it would be obvious that crime is the way the NRM reproduces itself. Hasn’t Museveni’s power broker, Andrew Mwenda, reminded us endlessly that corruption is the way Museveni’s government functions – not how it fails!

Because of this outstanding handicap—belonging to the NRM— Kadaga needs to be profusely credited for every single incident she broke ranks with the leadership to the point of being hounded out of the party: on UPDF crimes on Lake Victoria; funding
of the Southern by-pass; the debate on kidnapping Ugandans; Bank of Uganda investigations; illegal repossession of already compensated “Indian” properties; Covid-19 double-standards as private international schools continued to operate, etc.

And this is where media has failed the country. This woman could never have been hounded for nothing. That those things made it to the floor of parliament, and ministers, and alleged thieves were challenged to explain themselves should be credited to her.

I am not saying much success came out of her initiatives, but simply having them debated and followed up within the conditioning limits of her party and office, Kadaga should be credited. See, she never even tried to mellow herself towards
a more useless but otherwise prestigious office, the vice presidency. [If Museveni offered it to her, it would be Museveni sheer desperation; if he didn’t it, would be her victory].

There is no better manifestation of victory in defeat than Kadaga’s loss of speakership with close to 200 votes. Even with the entirety of the NRM machinery hovering all over, the Busoga strong woman garnered over 100, and close to 200 votes. That is called power.

What a way to sign out! As the Tigray say, “better to die like a lion than live like a dog." I am not saying Speaker Jacob Oulanyah became the dog, I am just saying, the outgoing speaker chose to die like a lion.

Look, the stage was set for a complete humiliation of this woman. Kadaga’s competitor, Jacob Oulanyah, did not campaign at all. He sipped his coffee confident this was not his fight.

As The Observer cartoonist Jimmy Spire Ssentongo vividly depicted, all Oulanyah did was make his lips, get his handbag, act coy and strut about as the freshest and humbler bitch. Museveni did the fighting as Oulanyah enjoyed his coffee cross- legged. Who knows, it could even have been wine in that coffee cup!

Indeed, Museveni would tell the country after the vote that he spent the entire night bullying and buying parliament’s newbies.

He then caught up with others in the morning and bullied them too, and then sat there the entire time to watch them. Note that with many of these new MPs having never seen Museveni before becoming MPs, surely seeing this man with his regalia, SFC guards, ambulance and toilet must have been overwhelming.

But that notwithstanding, some Kadaga- committed cadres were never frightened. That Oulanyah would be announced “unopposed” yet Kadaga actually picked nomination forms a day earlier for a contest is testament of the heat Kadaga was getting from the Museveni machine.

Bloggers and our semi- literate pundits were all over social media maligning her. But at the end of the day, she collected a whole 197 votes. Those were hers. There have been allegations that Kadaga’s rebel stance on the speakership was meant to create a shadow opposition, crowd out actual opposition and create opposition from within the NRM.

This is a problematic proposition bereft of empirical scrutiny: first, Museveni has never been afraid of Uganda’s “actual opposition” requiring him to engage in very sophisticated trickery. Uganda’s opposition is extremely vulnerable.

Second, the hate and furry against Kadaga is real—rooted in power and resources—and has been smoldering for long.

Third, it is my position that the only legitimate opposition against Museveni will have to emerge from inside NRM and the UPDF [on the prompting of activists on the streets]. So, Kadaga signaled to expected opposition – executed within the conditioning limits of her office, the ugliness of her party.

Stupidly DP president Paul Ssemmogerere jump to supportn such baseless claim. He thouth Museveni would hand over power to him, to date he is still waiting.

So, what is the difference between you and Museveni when you do not want to go to any court and prove your case?

The same way late Obote was accused of killing the Kabaka and baganda but nobody took him to any court, right?
Report to administrator
-1 #32 Remase 2021-06-08 10:52
Oruk, again, read Spire's cartoon. It clearly depicts the truth that M7 owns Uganda, including but not limited to, the judiciary.

Talking about exposing M7's ass, could you tell me what hasn't been exposed? Or better still, what change would the exposure bring, which it failed to bring in 35 years?

You are intentionally urging us to keep recycling the same thing over and over again, then expect different results, right?
Report to administrator
+1 #33 Kalemera 2021-06-08 12:17
Quoting Oruk Charles:

Some few days ago, I wrote as a joke that: Creating more PHD holders in Uganda means more problem.

This can be seen in this article above written by Yusuf Serumkuma a PHD student or is already a PHD holder.

A friend of mine who was doing his PHD in the university I was also studying, joke to me that, PHD standans for: Permanent Head Damage. I lought untill my ribs were paining.

I don't know how I can say this respectfully but it is hard to take you serious when you can't string together a correct sentence.

Your reasoning, and use of tired stereotypes, shows your diminished intellectual capacity.
Report to administrator
0 #34 Oruk Charles 2021-06-09 12:12
Remase, what has not been done is to prove that, the election of the speaker of parliament in 2021 was not done according to this and that law or rules and that the court has found it wanting.

I will still repeat what I said before, former FDC Kizza Besigye did not only claimed by words that all the elections he participated in except the last were were rigged, he went to the court.

His action also expossed the court. Hon Kyagulanyi did the same.
Report to administrator
-1 #35 Oruk Charles 2021-06-09 12:19
For you to say that there was no voting that took place in the parliament of Uganda this 2021 to elect or select the speaker of parliament is the lie I am fighting.

Tomorrow if NUP or FDC or any opposition political party become the majority MPs in parliament, they will most likely use the same system unless the same procedure is changed by the current parliament.
Report to administrator
0 #36 Oruk Charles 2021-06-09 12:25
Kalemera, I did not claim anywhere that I was an English man. I am a Ugandan, African who has his own language.

If you did not understand anything that I wrote in that small paragraphs you refered to, you should have asked me to clarify.

There was nothing of intellectuals that except in your head. I was speaking plain english than academic.

If I may ask what is "intellectual diminishing capacity?" Are we in a debate concerning an issue or in an examination or test in a learning institutions?
Report to administrator
1234