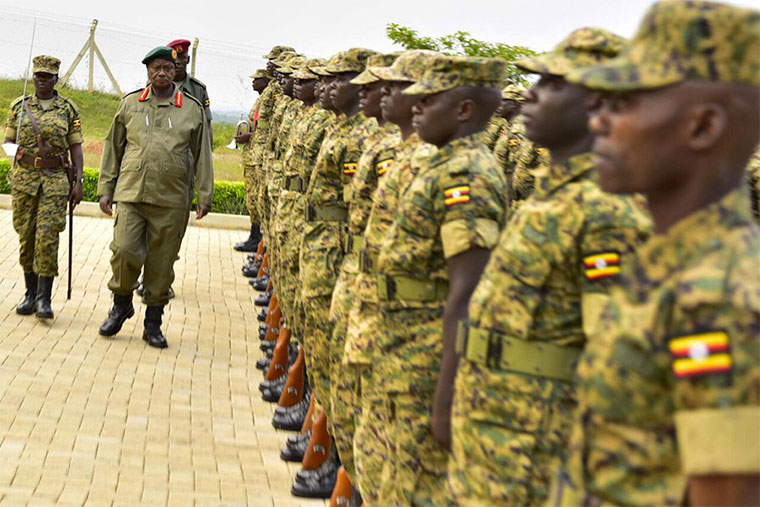 Of all the many policies and services that our citizens deserve in Uganda and need to understand, none is so important as peace and security.

So, as we get close to the swearing in of the president in May, I would like to highlight the most important question concerning keeping peace in our country Uganda.

Having a democratic and peaceful country like Uganda requires a number of components, some tangible, like economic wealth, technical preeminence and other components that are intangible such as a moral force.

An army that is strong, ready and modern is all that peaceful countries want to have. When both the intangible national will and those forces are forged into one instrument, national power becomes effective and that is exactly what President Museveni has done for all the time he has been in power.

On February 6, the ruling party always marks the day of the first attack on Kabamba barracks by the National Resistance Army (NRA). That attack started the liberation war in 1981 to January 26, 1986 when the army finally took over Kampala.

Unlike the post-independence armed forces which were characterized with extra-judicial killings, impunity, indiscipline, torture of the wananchi, incarcerations and outright disappearances of citizens simply suspected of being opposed to those in power at the time, the NRA was different. For instance early in September 1972, Chief Justice Benedicto Kagimu Kiwanuka disappeared without a trace. He was one of Amin’s earliest and most prominent victims.

After the final overthrow of Idi Amin in April 1979 by combined forces of the Tanzanian army and Ugandan dissidents, the killings and state persecution of citizens did not end. Instead they continued to spiral out of control.

The Obote army, too, failed to win the hearts of Ugandans because they were not any different from the Amin army and did not know how to relate with the wananchi who only prayed hard that the country gets peaceful.

The National Resistance Army led by Gen. Yoweri Museveni seized power after a prolonged five-year resistance war against the ingrained dictatorship. They came with a new daybreak that had never been seen in any armed force before.

The Uganda People’s Defense Forces has been at the helm of Uganda because of the discipline that was instilled in them right from the onset of the liberation war. The ideological and political grounding is another aspect of training in the UPDF, which has set it apart from previous armies that never worked to make sure citizens were in peace and harmony.

Over the years, the UPDF has continued to be given responsibilities even in mainstream government due to their discipline. The case in point is the Operation Wealth Creation programme. A number of soldiers are heading ministries, while the construction brigade has continued to assist government on various projects such as constructing houses at the Bulambuli settlement area for the Bududa landslide-affected persons.

Through the National Enterprise Corporation (NEC), the UPDF business wing, many projects have been accomplished and some are ongoing like the construction of the Kiira vehicle plant in Jinja.

The army now also produces its own water under the brand of Uzima mineral water, Ulinzi condoms and armored Mamba vehicles. All this has been done by the UPDF to show the world that the army can not only secure us as the people living in the country but it can also involve itself in producing products and doing other things that serve great purpose in the country.

During the previous elections, the UPDF has been so instrumental in making sure that the country is peaceful by working together with Uganda Police. The two security organs have scored highly during the most difficult times of Covid-19 and the general election campaigns.

Therefore, for those that are still youthful like me, let’s not be duped into forgetting our own history. We should remind ourselves of what happened in the past before the NRM army came in to restore peace in our country.

There are so many lessons which the present and future generations must take seriously if we are to avoid getting back to the chaos that was here many years ago. The peace and stability we enjoy today was borne through sacrifice, and must be guarded jealously at all times.

The author is the head, Communication of the Government Citizen Interaction Centre, based at State House.

The army you're trying to glorify is managed by a family and then comanded by a tribe.

Ugandans are not proud of it because it doesn't respect our national diversity.

This very army has been shooting at unarmed civilians is that what you call protection.

Ugandans are murdered,kidnapped, tortured and arbitrary jailed by this very army you claim to be disciplined. Is this peace ?

Don't you know that the fiasco you consider as a liberation war has claimed more lives than both the Obote and Amin regime combined together.

Have you ever seen the thousands of human skulls,which were exposed on stalls like oranges?

The lack of integrity and the fact that you don't master the history you have narrated makes it taste like an oversalted meal, which can only be consumed by the likes of fake wanainchi and the John Boscos.
Report to administrator
+6 #12 Jama 2021-05-07 16:27
In your heartless article, you have not even demonstrated any sympathy for the victims of this army, the majority of which are young men.
like you.

So you are not different from someone, sitted on a tomb while enjoying sausages and beacons.
Majority of the youth wish for the end of your grandfather's barbaric regime.

So continue to enjoy part of the national loot, since as you said the army is on your side.
Report to administrator
+11 #13 Lysol 2021-05-07 19:43
This is one of the bogus articles I have ever read. Peace is not achieved through oppression.

It's like a wife-beater who always says he has peace in his house and yet he beats his wife at night. That is what Museveni's Uganda is all about.

The pseudo-peace which he keeps on singing is nothing but a fallacy. Real peace does not come through the power of the guns, but from the people themselves.

It's a human right thing and not a privilege. That is the responsibility of every government the world over, and there is nothing to brag about and use it as a blackmail to rule the country forever.
Report to administrator
+5 #14 Akao 2021-05-08 02:07
This person is either from planet Mar or his brain is full of worms
Report to administrator
+2 #15 Martha Leah Nangalam 2021-05-09 12:53
You people who are reading this article must remembr that Museveni bought out all the media house owners and editors such that they no longer can criticise the regime and must print all the garbage the regime tells them.

The only ones left are journalists and he is dealing with them too. You can read my post from yesterday that tells why and how. https://perilofafrica.com/2021/05/focus-on-musevenis-war-on-the-media.html
Report to administrator
+1 #16 Eric L 2021-05-11 20:15
The only positive you still have is telling us where you work and where your offices are located.

Anyone can tell why you even got a thought to write.
Report to administrator
12