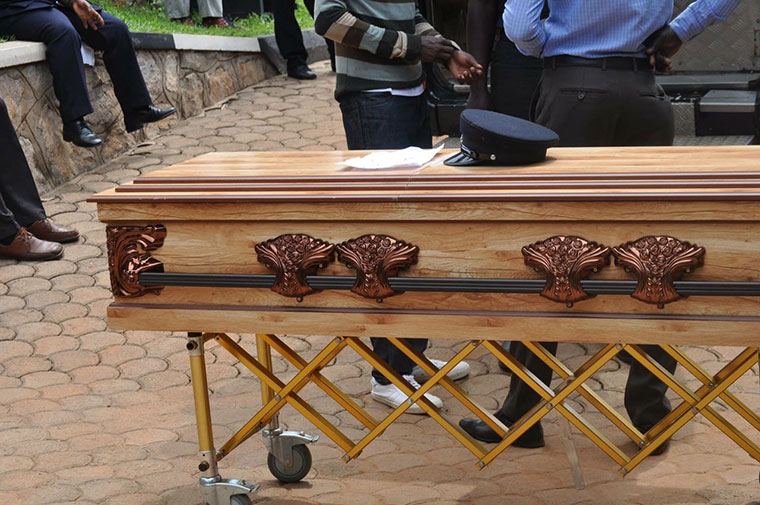 There is a viral video which once in a while appears on social media with General David Sejusa talking about the fear of poisoning inside the top echelons of government.

This clip was shot during a 2015 session where Gen Sejusa was meeting members of Uganda People’s Congress to discuss trust in the Electoral Commission. The former coordinator of intelligence tells the country about the deep levels of mistrust among members of cabinet – over things such as food and drink.

He unflinchingly said that when they go for cabinet meetings, they carry their own snacks, that is, chapattis and samosas in their jackets. There is a serious quiet pandemic of poisoning in the country, Gen Sejusa emphasized.

“… we who are inside the army, inside cabinet, inside parliament … You cannot serve me tea and I take it,” the general somberly remarked. If we didn’t simply dismiss him, we are only talking in whispers.

The Justice Forum party, Buganda Kingdom, the Muslim community, and the country at large continue to struggle coming to terms with what befell, perhaps the most eloquent and sincerest politician of our time, Hon Hussein Kyanjo.

That Hajji Kyanjo would lose his most prized asset, speech, and get reduced to speaking by way of artificial batteries inserted into his chest, is quite telling.  And that he is only still with us because of sophisticated medical operations abroad should dent our collective conscience.

Kyanjo has constantly told the country that he was poisoned by adversaries in the corridors of power.  But sadly, we either do not believe him or are only talking in whispers about his claims.

There is a story about how poison as a form of political negotiation came into Uganda, via Cuba, Israel and then Kampala. There is never concrete evidence — in the form of either pictures, videos or written documents — for these things. In fact, to ask for such forms of evidence is to ask the wrong questions and simply shoot the debate down.

[It is like asking for evidence of corruption; you get nowhere as no receipts are issued for corruption unless idiots are involved]. That is why we need to become oral traditionalists to get this conversation going. We need to pick talking points, identify commonly mentioned names — of both victims and perpetrators — and get this conversation started. It should be a Truth and Reconciliation Conversation.

The poison legend in Kampala goes that sometime in the late 1990s, a young aide to President Museveni, Col Noble Mayombo mooted the idea of introducing poison into the political milieu in Kampala. Some enemies needed to be quietly silenced without the fanfare and drama that defined President Amin.

The then director-general of External Security, the tough-talking Karimojong, David Pulkol, strongly arguing against the idea, told the young aide that once poison was in the mix, it would be difficult to get rid of it or even control it. The legend continues that these two equally young fellows did not conclude this conversation but simply pushed it to another day.

But upon Brigadier Noble Mayombo’s sudden illness and eventual death in a Nairobi hospital, family and close friends, suggested strongly, Mayombo was poisoned by his political adversaries (The Independent, May 2, 2008).

Even when a Dr James Makumbi report ruled out poisoning, his family — specifically his brother Major Okwir Rabwoni in an interview to Daily Monitor (May 5, 2012) — was not convinced.  A team of reporters including renowned journalist Andrew Mwenda, in a long investigative piece for The Independent, noted that, “…Fear and rumours of army officers poisoning their rivals are widespread in Uganda People’s Defense Forces (UPDF). Everyone is always on high alert. In this game of high stakes, it is dangerous to trust even friends.” Written in 2008, one wonders how deep this poison crisis has gone.

Then came the young member of parliament from Butaleja district, Cerinah Nebanda, who would be accused of drug abuse. Then Gen Aronda Nyakayirima, then Dr Sheikh Anas Kaliisa, then Sheikh Nooh Muzaata Batte, and  Bishop John Baptist Kaggwa.

Although we have always received postmortem reports dismissing poisoning, we never stop talking in whispers about the possibility of our beloved falling to the invisible hand of poison. Because we see things, and feel things.

We have read Michel Foucault and we know science has often been bent to suit the interests of powerful people — often, especially big merchants and politicians. Noam Chomsky has told us states remain the biggest vendors of fake news. We know journalist Julian Assange is still locked up in the Ecuadorian embassy in London for telling us the nasty crimes of politicians. His crime, good journalism.

We know.  But while we give governments the benefit of the doubt, we come to listen with a great deal of suspicion. This, then, means that governments ought to respond with water-tight evidence and proofs when our senior citizens — super public individuals — suddenly die.

Last week, we lowered Archbishop Dr Cyprian Kizito Lwanga into the ground. For a long time, Lwanga lived under the fear of being poisoned. Close family members narrated how he had become extremely cautious about interactions and feeding patterns. Some say that he had even hired a [poison] taster for his meals!  This is sick.

The list of people dying from “sudden death,” or falling to “heart attack” is too long for national suspicions of poison to be ignored. Could it be true that in our uneducated or limited exposure to the medical sciences, we have found it too easy to explain sudden deaths/heart attacks as cases of poison? But what then would explain the peculiar pattern of the profiles of the victims?

To answer these deeply troubling questions, this poison conversation needs to be moved away from whispers to the public arena. Gen Sejusa is not crazy, nor is Hussein Kyanjo.  David Pulkol is still alive, they need to be encouraged to come out and speak straight.

Family members of victims are all around us and should be encouraged to voice their suspicions. That the Muslim community lost two erudite scholars, stalwarts of the community in a single month, and just a couple of months later, the Catholic Church loses one of its strongest pillars, it is not enough to content ourselves with stories of “heart attack” and “sudden death.” Our suspicions have a history — and the cost is simply humongous.

These men had become institutions, factories, or prime natural resources. Besides our political contestations, entire families, villages, international and local networks wound around their lives. Losing them wantonly is like bombing our oil reserves in western Uganda. And if the country believes strongly – although talking in whispers – that they were poisoned for political reasons, we need to mainstream this conversation.

You are bewildered by what you do not understand. Economic growth to you feels like social upheaval. You want to return to something quaint, from 1950, when Kampala had 100,000, people, mostly white and Asian.

Events overtook your picture book ideals. Kampala is a densely populated city. Its growth has been informal. Your presence here confirms that!! Are you complaining about yourself??

I would like for you to start thinking in terms of 'process', away from 'events'. Society develops in a process that has stages.

We are in a stage that feels chaotic, is unequal, etc. Yes, but that is not unusual. That is how it works.

Have you tried reading Charles Dickens? He will give you a good idea about how London was in the 1800s. It was a similar stage to where we are today. This is why reading is good. You are in an oral paradigm.
Report to administrator
0 #52 John B 2021-04-20 12:26
Lakwena. Grow up.
Report to administrator
+1 #53 Remase 2021-04-20 14:47
Sadist Scumberg, in order to measure your sadistic economic growth of the Boda Boda, Uganda has to compared to developed countries.

Also, like I said before, even if we were to compare the current worst automatic M7 govt to a far better Amin & Obote regimes, we never had Boda Bodas and Uganda's economy was better.

So, it's all about corruption, nepotism, tribalism and patronage. The govt is being run by incompetent and organised criminals. That's why you sadistically claim that the most dangerous Bada Boda public transport system is an economic growth!
Report to administrator
0 #54 Lakwena 2021-04-21 09:55
Quoting Remase:

Sadist Scumberg, in order to measure your sadistic economic growth of the Boda Boda, Uganda has to compared to developed countries.

Remase, the foolishness of NRM ideologue is in their distorted sense of value.

E.g., from 1981-1986, for 5 years; when these thugs destabilized and made the country ungovernable, the GDP was Shs500 billion, yet non of the social services: in Education, Health and Agriculture collapsed.

But today the same amount, Shs.500 billion is the Budget allocation for URA.

In other words, in their idiocy of propaganda value, the more the digits (Trillion) in the GDP, Shs.45 trillion (70% of it borrowed), the progress and the wealthier Ugandans have become. Stupid.
Report to administrator
0 #55 John B 2021-04-21 16:27
Lakwena. Currency is not measured in digits. It is measured in value, stability, convertibility.

500 Billion in 1986 was valueless. Nobody wanted it. It was not convertible, it was unstable. Business happened through the black market in dollars, like in Zimbabwe.

There were no goods and services to buy so it was mere paper. That is why they cut the zeros, to give it a more accurate reflection of its actual value.

Lakwena. Currency is not measured in digits. It is measured in value, stability, convertibility. ...

There were no goods and services to buy so it was mere paper.

In other words, you are just like your malevolent god-sent Gen Tibuhaburwa, you must also be a soulless dialectical materialist.

No wonder no concern for others (compassion) and only causing .grievous harm e.g. apart from diabolic violence; widespread poverty especially youths unemployment at 87%.
Report to administrator
0 #57 John B 2021-04-22 18:13
Lalwena. Between 1971 and 1980, the Uganda shilling had exactly the same value as the Kenya and Tanzania shilling. 20 shillings for one British pound.

You do not have any clue as to the history of this country. All you have is a determination to prove your nasty little thesis at any cost.

You lack any generosity of spirit which is why you cannot find it in yourself to acknowledge that some very good things have been done on your behalf by people who not pass your tribal criteria.

The sad thing is, that you are busy enjoying the Ugandan revival, living a life that was unattainable for you even 20 years ago. The best you can do is to spread hatred lies. You are quite disgusting, apart from being ungrateful.
Report to administrator
123456