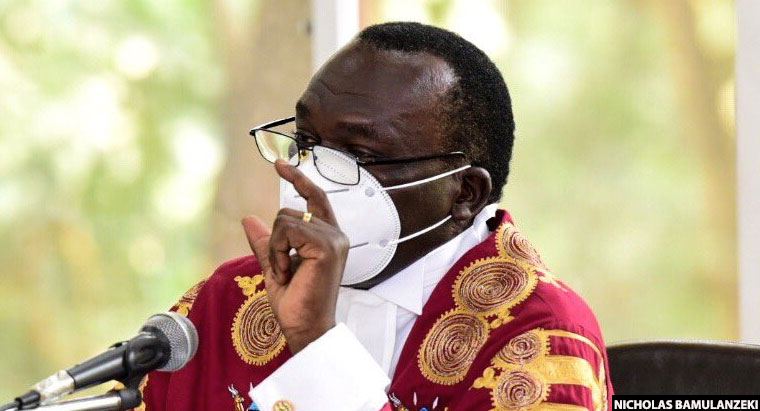 If I were Chief Justice Alphonse Owiny-Dollo chairing a panel of justices of the Supreme court making an inquest in the January 14, 2021 presidential elections, I would demand for Kyagulanyi’s respect of the judiciary.

I would be unequivocal on that and tell him about Roper cutting down the forest in Man of All Seasons. I would say: Court has a sanctity.

Nevertheless, as a long serving official in Ugandan courts, I would quickly remember that this sanctity is not absolute because in recent history, court has ever been (invaded) raped, implying that what it delivers is not always justice.

As a justice, I would recall that during the LRA wartime in the north, even as rebel leader Joseph Kony had a national and international indictment, most Acholi felt strongly for Mato Oput as a better option for justice; knowing that in a court of law, some truths would remain hidden particularly on the side of government.

In the same vein, I would also recall that Madiba Mandela was sentenced to life imprisonment by a Pretoria court. I would remind myself that it was a competent court; the injustice irrespective.

Finally, I would be mindful that there is some likelihood of the petitioner (the derided musician) in this inquest becoming Uganda’s No. 1 in future, whereupon I would be under him even if my conviction of its realism is remote.

I would remember that this remote likelihood stretches beyond my lifetime and since I have children and grandchildren, I would be mindful of this generational payment or reward of my actions in the course of this inquest/ petition.

In the last 12 months or so, many roads in Kampala have continuously become impassable. Many roads have ceased to be called roads but trenches. Motorcyclists and cyclists are reporting to various garages for different reasons.

I have since lost two tyres, one being cut by a new pothole and the other by a sharp pothole. Certainly, there are other victims who have suffered worse losses. Potholed roads have made Kampala city look ugly, disorganized, dirty and shabby.

Other effects of these potholed roads include unnecessary traffic jams, loss of time which literally means loss of money failure to make it to work on time and school-going children especially candidates spend hours in traffic jam.

Bad roads are making the current fragile economy look worse. Heavy trucks and lorries, as well as buses, are not spared either.

There is a huge pothole between Kireka bridge and Bweyogerere trading centre. Often, trucks to Nairobi slow down around this area, creating traffic jam over a long stretch. It’s high time road users dragged KCCA in courts of law for either being negligent or a shame to the nation.

Why build new roads in the outskirts when the central business district is a mess? What motivates KCCA administration to take such decisions? Industrial area roads are all limping. Roads that facilitate trade should be considered first, the community roads later. KCCA planning dept, where are you?

We can solve land problems

Non-compliance of article 26 of the Constitution continues to worsen the land question in Uganda. Economically, land is seen by many citizens as space for locating economic production activities, infrastructure and dwellings.

Socially, ownership of land acts as a source of prestige and in some cultures land is a deity that exercises control over its people. It is no doubt land is a heart and ticket to Uganda’s development.

It is a now trite fact land is the most important source of livelihood in Uganda either for commercial or subsistence reasons. Every person who acquires or owns land is deemed or seen to have found a purpose in life. That notwithstanding, the land problem in Uganda remains one of the most unresolved challenges in Uganda.

There is a lot of land grabbing and arbitrary eviction. Amid these land problems, the country is marred with many land laws, raging from the constitution, acts of parliament and land regulations that could solve these issues. We have the land commission, district land boards and land tribunals.

So, what’s the problem? The land problems originate from compliance. The government of Uganda, the army men and the political leaders are the major trouble-causers of the worsening land questions. To solve these land problems, the government should immediately start complying with the laws.

The land tribunals, district land boards and the Uganda Land Commission should start doing their duties and this will reduce the case backlog in the country. Most importantly, the government should carry out a national land law sensitization programme to solve the land question.

Since the media exposed the Finance ministry’s proposal to allow government levy a 0.5 per cent Excise Duty on cash withdrawals on the counter, agency banking and ATMs starting next financial year, the public has condemned the move.

We believe that this proposal will subject people whose incomes are already taxed to double taxation. Already, banking services are heavily taxed. Therefore, an additional excise duty means the burden will be transferred to the clients, majority of whom are already burdened enough.

This will make banking more costly. Therefore, the tax proposal is already unfair and is not a measure for compliance. This is why government should drop this proposal.

We also think it will not address the taxation of big e-commerce platforms like Amazon, Alibaba, Jumia, Uber, Facebook and Google, among others, who still remain outside the tax bracket because of the weak regulatory framework.

It is also important to take note of the 2018 Finscope study for Uganda, which indicates that 50 per cent of Ugandan savers (approximately five million adults) save informally. The proposed 0.5 percent charge on all bank withdraws is bound to discourage more people from depositing their money in commercial banks.

This may have undesired effects of reduction of bank transactions. This tax proposal on bank withdraws is counterproductive. Here is why: excise duty tax is levied on bank to wallet transactions and the same is taxed further through mobile money transactions.

Therefore, the same people are being taxed multiple times which does not increase the tax base. Some banks increased charges on over the counter cash withdrawals in order to promote the use of e-banking.

Therefore, whereas we acknowledge the fact that it is critical for Uganda to increase domestic revenue to finance public goods and services, this should not come through double taxation and increasing the burden of the already burdened taxpayers.

0 #1 Lakwena 2021-03-05 10:01
In other words Wilson Bbosa, because Blind Lady Justice does not lie; CJ Owiny Dollo would have lost nothing if he had stepped aside as requested by Hon Kyagulanyi's petition, and preserved his integrity.

This is because, according to the current privileges accorded to the Justices, especially the CJ; even after retirement, Ugandans would still pay his current full-salary Pension and police protection security till he checks out of this world:

In other words, a world where 87% of miserable Ugandans live without a dollar a day. A world where e.g., they educate and/or go to school up to University, fall sick and die at their own risk.
Report to administrator