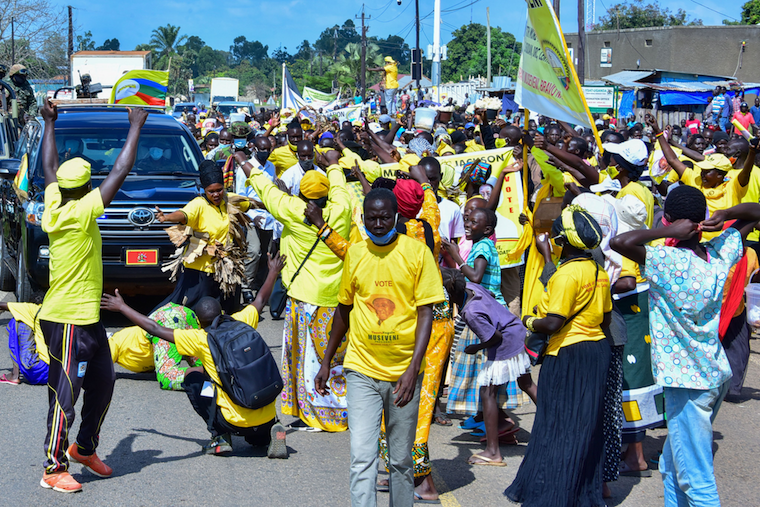 The gory scenes of police vandalizing Robert Kyagulanyi’s vehicle on his nomination day and battering his adherents conjured up, on top of the rather comical scene where the same police violently violated the FDC president, Patrick Amuriat, were frightening.

These events may serve the dictatorial regime, but they deprive the 2021 elections of their much- needed integrity, decency and fairness. We should not tolerate violent elections or unfettered state violence against the opposition.

Images of scenes where journalists are battered to a coma while on duty tells a tale of tyranny and leaves quite impactful trauma on the minds of those who experience or witness it. Those who care to read into and internalize this regime’s militant engagement with the public rightfully have a very low expectation of the 2021 elections.

As a social critique, the only plausible claim to any NRM ideology is militarism and its raw violence. The conduct of the 2021 elections embodies this militarization in as much as the militarized agricultural programs or Covid-19 lockdown measures. And, the violence just increases at every subsequent election without an end in sight.

Comrades Kyagulanyi and Amuriat must take heed of these trends. I know they are doing their best to remain level-headed, calm and peaceful. However, even Chinua Achebe advises that any handshake which goes beyond the elbow turns into something else.

Solving socio-political problems using rampant and unjustifiable use of excessive state violence only helps to radicalize our youths and subdue our population. Thus, undermining the democratic processes. The Covid-19 lockdown revealed a snippet of how meticulous militarism can go on a civilian population.

The violence effectively immobilizes and disengages the opposition from interfacing with the voters and then generates voters’ apathy towards the electoral process and its outcomes. For democracy to occur, its tenets must be alive, and freedoms must be afforded to all.

How possible could candidates like Joseph Kabuleta traverse over 145 districts in 60 days when candidate Museveni is the only one with the right to fly choppers and use the media unfettered? The Electoral Commission has played its part in undermining the integrity of the elections covertly and overtly by their policy of non-action against police brutality on opposition candidates.

Without equal access to the electronic media, this digital or so-called smart election is itself a big fat farce. The EC must establish a clear rule to enable all candidates equal and unencumbered access to the media. In Uganda, the NRM has consolidated its control over the media/press and press freedoms.

The media is over-infiltrated, censored, surveilled, and most governed by the regime’s cadres and operatives to the detriment of freedom of expression.

As such, intellectual debates over the media have been curtailed and intellectualism has declined profoundly. As it looks, presidential candidates, Robert Kyagulanyi and Patrick Amuriat will not be tolerated on the media waves to reach their audiences. I can predict that the regime may tolerate Norbert Mao and Mugisha Muntu more for their benign presence on election tracks.

Further, the conduct of the militarized NRM police is a sobering indicator that there will not be any fairness in the 2021 elections. The so-called Independent Electoral Commission serves a mere functionality of legitimating an already flawed process if they cannot protect candidates and subdue the police.

You could see how the commissioners were so self-absolved and least bothered that Amuriat walked in on bare feet to his nomination at Kyambogo. That insensitivity ought to be called out. The main conclusion is that the integrity and fairness of 2021 elections are on the line. The EC should guarantee access to the media, control the police, and ensure free access to district facilities.

The author is a political critic.

+1 #1 Juwait kali 2020-11-18 08:48
I think you must have had a giggle when calling for the EC to intervene into police brutality, well knowing that byabakama got that job to just play blind.

He even knew the winner the day he was appointed!!!!!!
Report to administrator
+1 #2 Kalibbala 2020-11-18 21:35
Morris Spot on..You see these Same People arrived in Kampala in Tatters and very Hungry propagating Liberation and Salvation after having Massacred 500.000 Ugandans!

How can Somebody with Blood on his hands Promise you Peace and You fall in such a Trap??It is only in Uganda!

Today 35 Years down the Road, The Youth are awake and are not Buying this "We Fought Crap" Anymore..Watch this Space..
Report to administrator
+2 #3 Lakwena 2020-11-19 09:59
Kumakech, it is only in a free, democratic and civilized society, where you can make reference to "Integrity".

But in a country like Uganda, where gangsters captured the state (gang-gun rule) 35 years ago, "electoral integrity" is a far away cry in the wilderness.

In a free, democratic and civilized society, there are only two threats to the rights of citizens: hardcore criminals and the government.

In our misfortune as country the government, which is supposed to protect the citizens from criminals is made up of criminals.

And the constitution, which is supposed to protect us from the government; is superintended by the criminals and their appointees in government, e.g.
in the Executive and Judiciary (EC Justice Byamukama).

In other words Kumakech, where will the "integrity come from, in order to have a free, fair and credible election?
Report to administrator
+1 #4 WADADA rogers 2020-11-23 09:54
ON the 22-11-2020, Museveni was supposed to appear on all local radio and Tv stations in what was disguised as a national address and that the same would run throughout the campaign period.

fortunately, the address was cancelled for unknown reasons in what many think was as a result of a letter written by National Association of Broadcasters.

The timing- campaign period means that the address was intended to promote Museveni as a candidate in the race at the expense of other
Report to administrator
0 #5 Akot 2020-11-24 16:31
Kalibbala, thanks.

How did those who were 30 in 1986 live & how many still live, how are their kids/grand kids living & what life awaits them if Ugandans legalise Museveni through yet another fake election?

Ugandans do know that as long as they are alright with the tribalistic system, they will be alone with Museveni while democratic developed world will continue to watch in silence, right?

A 15 year old was arrested for supporting opposition, right?

So, what future is there for the young, if Ugandans stupidly legalise Museveni through yet another election?

Without saying NO to the tribalistic system & UNITING against Museveni, tribes MUST give the next generation chance through Independent Tribal States!

Ugandans MUST not go for next fake election but stop Museveni & family in UNITY, if they want a different country/land & govern as they wish!

By maintaining the tribalistic system that goes against International Principle, Ugandans lock themselves with Museveni as no democratic developed country will dare say a word against him!

Ugandans MUST bring down the tribalistic system & this comes FIRST!

Then UNITY & coming out to block Museveni in State House will leave him no other option but to stand down!

Ugandans MUST give the next generation chance to a different land & how it's governed!

Ugandans' tribalism is worse than Ethiopia, S.Sudan, Libya...because while these at armed war get help & their displaced are taken care of by UN/EU, tribalistically divided & ruled Ugandans will NEVER get help!

Ugandans MUST bring down the tribalistic system & UNITE to end Museveni's rule then Reform the Republic, or Independent Tribal States, or go ahead & legalise the demon through yet another fake election!

What do Ugandans chose?
Report to administrator