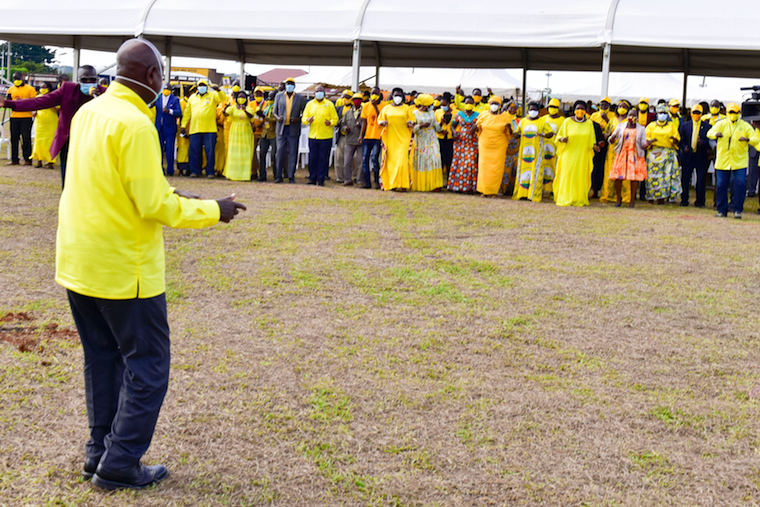 Unlike before, the incumbent, President Yoweri Museveni Tibuhaburwa has steered clear of huge rallies during his campaigns. It could be that he's personally being cautious about Covid-19, given his age (76), which falls under the high-risk age for the virus.
The campaigning formula also gives his previous efforts of curbing the infectious disease legitimacy, because indeed, if he acted otherwise, it could mean that his efforts were meaningless or that he has recently developed a new opinion about the disease.
Now here is another thing, I also think that his deliberate small meetings also play to his advantage;
To an average Ugandan voter, sizeable crowds are synonymous with winning an election or at least getting a reasonable number of votes. We've all heard about ferrying people to make sizeable crowds before, and we've seen a photo, apparently taken during Julius Malema's manifesto launch being uploaded on Bobi Wine's social media pages this week. All those actions are intended to portray a particular candidate stronger.
But now, the average Ugandan voter also believes that Mr. Tibuhaburwa has been deliberate about making small meetings. It's not that Ugandans have boycotted his campaign rallies. In so doing, Mr. Tibuhaburwa has not demonstrated where his popularity stands in 2020, if crowds are to be the standard parameter.
As such, he has clearly denied the ordinary voter a weighing scale, to determine who is more popular between him and the leading opposition candidate, Mr. Kyagulanyi Robert. I really don't know whether the campaigning strategy was also meant to contrive such a thing, but I think, it indirectly does.
Mr. Kyagulanyi has cryptically stirred Ugandan voters by saying that if the election is rigged, they know what to do. His counterpart, Patrick Oboi Amuriat and his party Forum for Democratic Change (FDC) have openly talked about 'Plan B' and constantly expressed no faith in the electoral process.
I'm also among the Ugandans who believe that Mr. Tibuhaburwa has the entire electoral process in control and therefore can't be won in an election. Following that, it's highly possible that Amuriat, Kyagulanyi, Besigye and other opposition candidates will be speaking the same language and preaching the same thing (street protests) because they don't have any faith in the judicial system, whether the rigging is real or perceived.
But how does the perception of being rigged in an election come up? To an ordinary voter, campaign crowds contribute a lot to their perceptions and therefore will put that into consideration before pouring on streets.
In this case, they will have no real crowds to compare with since Mr. Tibuhaburwa isn't showing us his maximum strength. The real rigging is in most cases hard for an ordinary voter to detect because detection is a course fraught with data, tallying figures and deep analysis. So, it is usually the perceived rigging that stirs most voters to contest the outcome of an election.
So, if after Byabakama's declaration, Besigye, Kyagulanyi, Patrick Oboi and others call out voters to demonstrate as they've already threatened, will we see rioters on streets? if yes, will they be radical enough to sustain a prolonged protest?
The author is an intellectually curious Ugandan

0 #1 Akot 2020-11-24 16:15
The problem is not Museveni but Ugandans to whom tribal lands belong, as it's them who go for fake elections they know will bring no other than Museveni!

If Ugandans don't want Museveni, all they need to do is bring down the divisive tribalistic system he put in place to ensure we get at one another instead of getting at him in UNITY!

We re calling one another to explain our comments instead of UNITING to say NO to Museveni!

How can Ugandans who say they want change, not know it's them alone, but in UNITY & blocking him, who have the power to show Museveni way out?

Why are tribal leaders still ensuring tribal allegiency, instead of standing down to ensure UNITY, for second Independence?
Report to administrator