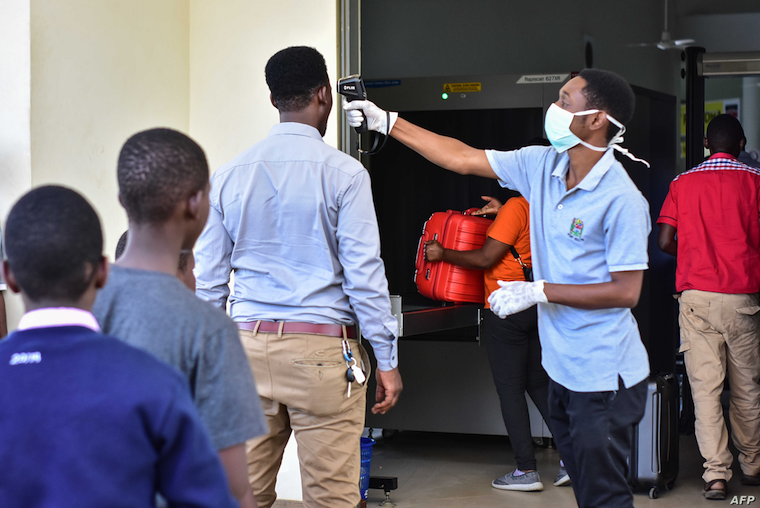 The temperature gun (TG), a gun-shaped thermometer, which uses infrared light (IRL) to record our body temperature should be criminalised.

The shooter who on average is an illiterate security officer or at best, a trained nurse, points the TG at the forehead, pulls the trigger and waits for a beep to record body temperature.

Three disturbing questions arise for reflection: what was so special with the TG that it had to replace the clinical thermometer traditionally used to record our body temperature? Why should it be pointed at our foreheads when the best body temperature can be inferred from under our armpits, wrists or an elbow folds? Are there ulterior/sinister motives?

According to experts, under no circumstances should the IRL be pointed at, ideally, any part of our bodies. How then is the TG operated by those neither so educated nor knowledgeable about potential risks?

From experts, the pineal gland (PG) which is located directly opposite our forehead is damaged by IRL. The most effective way to damage or destroy the PG is by pointing the IRL at the forehead.

This heinous act seems to have been preconceived by the brains behind this TG. This is notwithstanding the deliberate instilling and normalisation of the culture of gun violence associated with aiming the gun at the forehead, which itself symbolises murder!

Most importantly, according to experts, the PG is responsible for the secretion of melatonin, which regulates sexual development and the biological clock which controls sleep-wake cycles. This hormone also boosts our immune system, a key factor in the fight against diseases including Covid-19. The PG also regulates production of powerful anti-oxidants.

Anti-oxidants fight against cancers through targeted destruction of triggers of growth of malignant cells and tissues that cause cancers. The use of TG, let alone pointing it on foreheads especially of children, should be condemned and criminalised in the strongest terms possible!

Is politics a matter of life and death?

The violence from the just-concluded NRM primaries reflects the perception some Ugandans have about politics. It has exhibited what some people are ready to deal in in order to get into political office.

How did we get to the point where politics became a job above regular careers in medicine, engineering, teaching, et cetera?

I believe this is because of how our society views politicians based on their pay from the lowest levels. Politicians themselves feature monetarily at weddings, funerals, school matters and sports events.

The populace thus views them as affluent and is ready to go the whole hog when an opportunity comes up to join in. Unfortunately, the making of political service a job is the reason we end up with half-baked representatives who can hardly articulate issues affecting their communities.

Maybe the government can create a policy that pays more for various professions and restrictions on who should engage in politics. Otherwise, the leeway available has raised the stakes that people are ready to take to win, against all odds.

Every political party in the world would like to build its political base on numbers by always persuading members with a different ideology and those with no political idea to join their party.

As we head to the 2021 general elections, the National Resistance Movement has embarked on welcoming members from the opposition political parties like the National Unity Platform and Forum for Democratic Change.

Kudos to all the committed cadres of NRM who persuade these opposition members to join this well-structured political party for good leadership of this country. We greatly welcome Basajja Mivule, Andrew Mukasa, famously known as Bajjo Events, Ashraf Kato alias Ashburg Kato, and many others from the entertainment industry for their decision to join NRM.

However, these new recruits should follow the procedures of being confirmed as NRM by going through the confirmation classes where they can be rehabilitated. It is true people can be ideologically disoriented but they do not get oriented by merely declaring they have joined you. This is what NRM needs to address immediately.

Before equipping the new recruits with materials like big cars, money and other privileges, these newcomers should be oriented with the NRM ideology so that they can be fully transformed with a clear party message.

Transformation is a process and once adopted, the public can identify that there are new values someone with a different ideology has adopted in the new political party.

The party should make use of the National Leadership Institute, Kyankwanzi, to sensitize and lecture these people about what NRM is and offer them good leadership skills.

The NRM is a political party that will stay strong in the minds of the people yearning for more years of leadership, development and transformation. If the effort now is put on recruiting and splashing all sorts of lavishes on who is shouting hoarse on social and electronic media, then the party is losing the aim of building cadres with genuine ideology.

The peak on social media this week has been the viral photos and videos of Matthew Kanyamunyu conducting what many have called the Mato-Oput, a local reconciliatory court when the perpetrators of crime seek forgiveness from the family of the victim.

The perpetrator, Kanyamunyu, confessed to his crime and asked to be pardoned for contributing to the killing of the late Kenneth Akena. It is said that the elders in this particular court accepted to reconcile the two families and Kanyamunyu’s family agreed to pay 10 cows to Akena’s family.

To most of us, exposed to the retributive Eurocentric justice system, this model is seen to be an insult to the Western or colonial logic.

This kind of logic is the new-normal and common sense to most of us. Whether or not justice will be served in the Mato-Oput court or in our now criminal justice system is relative. To me, as a pan-Africanist, I am humbled by this gesture and I think our legislature should pick it up to integrate Mato-Oput models in our jurisprudence or to even take it further by recognising such courts as subordinate courts with jurisdictions to deal with cases as that of Kanyamunyu.

Moreover, Mato-Oput promotes reconciliation, transparency and ultimate healing among the parties involved. Still, this model is consistent with the spirit of the 1995 Constitution of the Republic of Uganda as amended. Also, it can help to reduce on case backlogs as “justice delayed is justice denied.”

And the costs of holding trials in such courts is not as hectic and expensive as having the same in the now ordinary courts. It is my prayer that the concerned agencies would take on this debate further until such a time when traditional models of justice are incorporated more in the Eurocentric model, which is not fully representing the African and Ugandan understanding of justice.