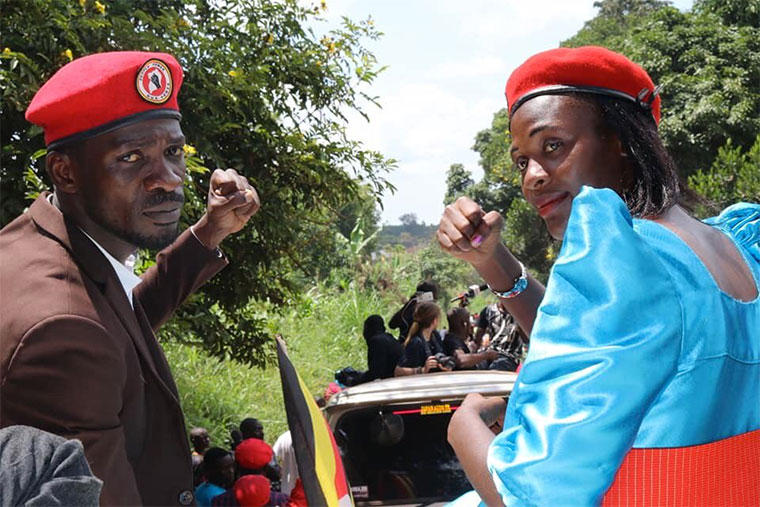 When I saw the video in which socialite Zarinah Hassan, aka, “Zari the boss lady,” seemed to question the credibility of Kyagulanyi Robert Ssentamu, aka Bobi Wine’s credentials, I decided, as usual, to watch only a small portion of it and move onto other things.

I tend not to take most socialites’ commentaries on political matters seriously, in the same way that I am not willing to take seriously a fashion show or beauty contest in which government spokesperson, Ofwono Opondo, is announced as the master of ceremonies or a judge.

When growing up in my childhood village, there was a famous story about a woman who used to publicly humiliate her husband by constantly reminding him to always remain silent whenever “men” were talking.

Although I was too young to comprehend why the story was famous among adults, I was able to understand, when I grew up, that probably in the woman’s mind, there was more to manhood than what the general public perceived about the man.

Similarly, according to the Zaris, there seems to be more to presidential credentials than what the constitution of Uganda stipulates.

In relation to Zari’s skeptism about Bobi Wine’s credentials for presidential candidacy, conventional knowledge dictates that Bobi Wine went through a rigorous vetting and verification process of the Electoral Commission of Uganda, before successfully contesting for the legislative seat that he holds today.

It is needless to mention - except to the Zaris - that legitimately Kyagulanyi meets the required credentials for the presidential candidature as stipulated in Article 2 of the Presidential Elections Act of 2000.

Sadly, while I found Zari’s rants about presidential credentials arbitrary, what I found, even more disturbing, were the nature of responses and insults hurled at her. Usually, no clever eagle will choose to battle a snake while on the land surface. Instead, the eagle will tactfully find ways of lifting the snake to a tour in the sky.

Similarly, by imagining extra credentials beyond those in the Presidential Elections Act of 2000 (Chapter 142), Zari deliberately staggered out of her actual lane and went metaphysical or at best, ontological, regarding the credentials for presidency.

Whenever people start making strong claims that are conventionally obscure, chances are that they have gone crazy or, their mental faculties are giving them access to some information that no one else has access to.

Therefore, instead of hurling insults at Zari, there were several ways of expertly guiding her to her lane without necessarily creating a mess or giving her the advantage of fighting from her “home-ground” by using the “ammunitions” that she understands best.

Anyways, I can always dedicate a full column on how to respond to the Zaris. Today, let’s turn our attention to de-bunking the notion of credentials for Uganda’s presidency.

One impact of Museveni’s perpetual presidency has been the mystification of the seat of the presidency. It is superfluous, to mention that statistically, in that many of the Ugandans today were either not born, or too young to comprehend matters of the presidency at the time Museveni became president.

It, therefore, follows that for most of the population, Uganda’s presidency is synonymous with Museveni in the same way that many people associate university education with only Makerere University.

In addition to the president himself declaring that he does not envisage any Ugandan with the appropriate vision to lead Uganda, several people have mystified Uganda’s presidency by insinuating that Museveni is a ‘special gift from God to Ugandans’.

I would understand if those who mystify the position of the presidency are insignificant, mostly of unsound minds or extremely low social-status people.

On the contrary, one effect of reasoning/thinking through the belly is that even seemingly significant members, including some PhD holders and some university professors proclaim that they cannot imagine a Uganda without Museveni as the president.

Therefore, in the minds of the Zaris, no one has presidential credentials unless they are above 70 years old, former rebels, current army generals, Museveni’s relative, perhaps hailing from western Uganda, have several years of working in different government ministries, have worked closely with Museveni and perhaps have an accent like that of President Museveni.

The writer is a social worker in Alberta-Canada.