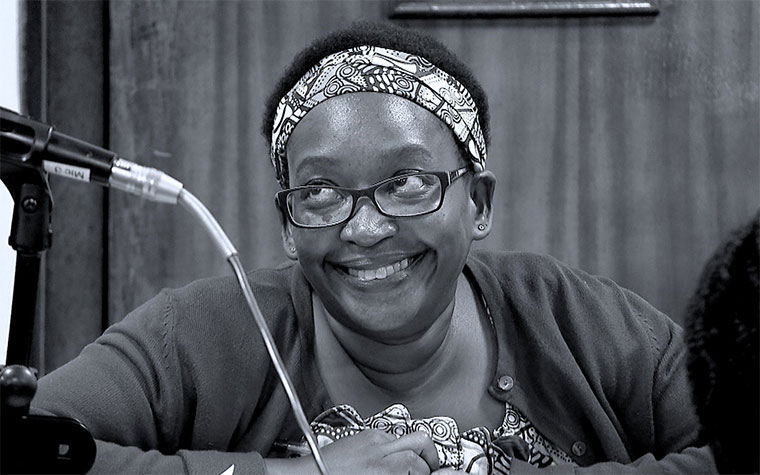 I first met Dr Stella Nyanzi at the Parliament of Uganda, Health Committee in February 2018 during a meeting with various stakeholders. I had followed her Facebook posts for a long time as well as the issues at MISR.

Our mutual friend, Vincent Nuwagaba, who was forced out of his doctoral studies at MISR, had tried to introduce me to Dr Nyanzi earlier but the meeting didn’t take place. Now we were together in a committee room to make presentations.

I led the team from HeartsoundsUganda. To make a presentation before members of parliament is no easy task. However, our president, Joseph Atukunda, had ways of calming the anxiety during question time. He spoke without sticking to the script and gave examples that lightened up the room.

Nyanzi had very kind words for us and commended me for a great presentation. I found it strange because the perception and impression I had about her was of a critical person always trying to point out negative things.

My first impression of Nyanzi was a great one and it helped me decide to wait and attend her presentation. It was the most detailed research I have listened to and read in recent times. Nyanzi is a medical anthropologist and senior researcher hence the invitation to talk to the health committee of Parliament of Uganda.

Meanwhile, there were many journalists waiting for her to make comments about the bill. Probably they expected something controversial.

Nyanzi is capable of handling the intrusive nature of the media but she decided that other mental health activists who had been meeting the Health Committee members do the media interviews instead of her being the centre of attention.

After the media engagement, there was a tour of parliament and during that time we discussed how best we can do advocacy about mental health. The government had been trying to force Nyanzi to have a psychiatric examination from an earlier arrest.

Ideally, to do such an examination would come after her consent. Heartsounds Uganda rallied support and had an Op-ed published in the newspapers condemning the government’s action.

Joseph Atukunda visited Nyanzi in Luzira prison and showed solidarity with an ally of the mental health movement. Ordinarily, with the stigma associated with mental health and being a target of the government’s oppression, Nyanzi would have shunned the mental health fraternity.

Perhaps the need to fight for the underprivileged people whose issues are most times ignored. This was the beginning of my understanding of Nyanzi’s quest for social justice in Uganda. It is a privilege to know her at a personal level. Most people who use her social media interactions to make conclusions about her end up missing great attributes of kindness and empathy.

Just before a month passed since our initial meeting and World Bipolar day (WBD) was getting closer. A day to the global Bipolar day. I asked Nyanzi to blog about it. Since she has a big following on Facebook, she could create awareness by making a post about bipolar disorder. She did it perfectly and there was a great conversation on mental health and bipolar disorders in particular.

It was very impressive and in Nyanzi we found a reliable supporter in mental health advocacy and awareness. A couple of months later in November, she was arrested and presented to court in May 2019 to answer charges of cyber harassment and offensive communication.

She is currently leading the rescue efforts of eight activists who were arrested from the latest ‘make noise’ protest led by opposition leaders.

Nyanzi’s passion to see that there is political change and raising issues of omuntu wawansi has made her very popular both nationally and internationally. Dr Stella Nyanzi is a force to reckon with and the 2021 elections will cement her place in the politics of Uganda.

The revised Electoral Commission road map declared by the EC chairman Justice Simon Byabakama has made her campaign strategy easier.

Social media, which is one of the main means of campaigns in the so-called scientific elections, is what she uses to communicate and, therefore, works to her advantage.

Kampala Central constituency will witness exciting leadership with a pragmatic approach to issues and great articulation of ideas when Dr. Stella Nyanzi is elected member of parliament.

Politics put aside..We need 1.million Stellas to Awaken our Sleeping Folks!!!The Vampires are Sucking our Country DRY..
Report to administrator
0 #3 Lysol 2020-07-03 18:45
Sometimes, the world needs a crazy person to bring about change and do things which many so-called normal people are scared to do.

The annals of History is replete by such people. Being crazy is only a mere relative word. Crazy can be good.
Report to administrator
0 #4 Lakwena 2020-07-06 09:19
In other words, it is those with big heart that risk their lives for the sake of others; and which is why those without the heart (love) demonize them as crazy.

E.g., because of his extra ordinary love, compassion and hence a public magnet; Jesus was demonized by the Pharisees as Beelzebub, the prince of Demons.

Filled with jealousy over the crowd he pulls, until they found a good reason to nail on the cross; many times they wanted to push him over the cliff so that he breaks his neck and blame it on an accident, but each time he escaped.
Report to administrator