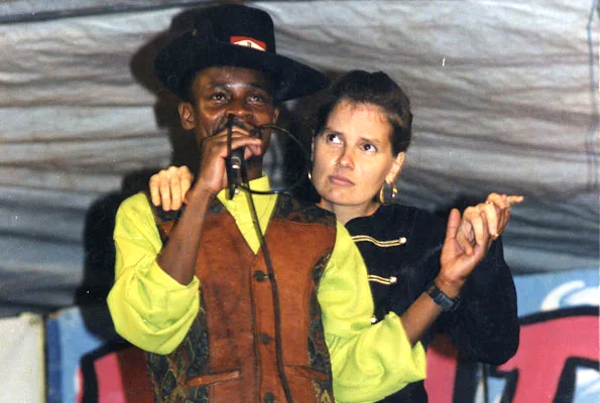 Away from the ugly wrangles currently going on in his family, the late Paulo Job Kafeero is arguably one of the best lyricists that Uganda has produced.

While the art of conversation is one that one can informally acquire, it takes many of us years of schooling to form. Yet still, with all the degrees, few manage to get to the level of wordcraft and general communicational creativity that one finds in the songs of the kadongo kamu singer who hardly went beyond S.4.

Like many other songs in the genre, this tended to stretch for several minutes. But when you start listening to them, they hold you captive all through their lengths. The music tends to speak to societal issues often discussed through drama, allegory, riddles and fables.

Though quite dynamic and diverse, kadongo kamu is one of the useful sites for understanding Baganda worldviews and their contestations. Some of the views carried in the songs are of course of the artiste, sometimes challenging societal orthodoxies. Even in this, they reveal a lot about wider beliefs.

One of Kafeero’s most popular songs is Omwana w’Omuzungu. Here he sings out his joy, relief, and celebration for having finally hooked up with a ‘daughter of a white person’.

A close English translation of the song can be found in Kathryn Barret-Gaines’ book One Little Guitar, where she transcribes and translates (of course with much local help) most of Kafeero’s songs. Unfortunately, it often takes an outsider to do such stuff about our real heroes, or else their legacies just gradually disappear like mist as we travel to other countries to visit monuments of their own.

Well, Kathryn was not totally an outsider – having come in through a broker to act the Muzungu lady role on stage, only to later fall in love with the artiste.

In the song, Kafeero dramatises his relief from the burden of unfaithful exploitative ‘local’ girls who had sucked him for donkey years without genuine love. In finding a white lady, his answers had been answered, and he was ready to do all it would take to keep her.

It is not lost to me that the song was originally an imaginative piece, for he did not have a white lady then. As such, I am not analysing the lived reality of Kafeero’s love life but, rather, the message in his composition and the wider racial perceptions behind it. I try to situate it within the broader psyche of some black people on racial differences and attributions of value.

Many of the things he sang about Ugandan ladies are part of our realities. The ‘detoothing’ culture, the commercialisation of love, the ‘slay queen’ phenomenon, the dishonesty, opportunism, and betrayal – all is part of our love relations. However, this does not generically define Ugandan (black) ladies.

Kafeero could have targeted a particular category of ladies, though one could read a generic tone of local distaste, dressed in familiar patriarchal entitlement and racialised dissing.

Somewhere in the song, he celebrates: “mpumulidde na mu langi etamanyiirwa” (I have found rest in a colour that is not disrespected). The obvious undertone was that he had found relief in whiteness and all its undisputed glory.

Because the message in the song may not have significantly varied from wider societal attributions to the ‘white’ race as compared to the ‘black’, it did not attract any public controversies on reception.

If anything, it was received with positive enthusiasm; and the presence of a white lady to act the part at his concerts attracted huge numbers of revellers. Questions could have been more on whether the two were really in love than about the unflattering racial comparisons. Kafeero must have been envied by many as he boastfully promenaded around the stage with Kathryn’s ‘white’ hand around him.

Even if Kafeero was not coming from difficult relationships with black Ugandan ladies, isn’t it a widely held local standard of beauty that the closer one is to whiteness, the more gorgeous? Isn’t it commonly said among the Baganda that “wakiriko nga omubi omweru”? Meaning that, if one is ugly but light-skinned, their ugliness is of a higher quality in the hierarchy - where the ugly black are obviously at the bottom.

While it is true that ‘blackness’ is actually constituted of various shades of brown and that these could have informed our own perceptions of beauty, such local aesthetics were certainly exaggerated and vulgarised when they later interacted with imperialist racial prejudices driven by white supremacist philosophies.

Self-hate and white-worship were thus embedded within our socialisation processes by which we gradually came to despise much about ourselves and glorify the white ‘master’ and all about his world – his colour, his names, his products, his countries, his language, his tastes, his religions, his political organisation, his education … It shouldn’t then surprise us that a rich person is sometimes referred to as a muzungu, and many residential areas of rich people in Buganda acquired the neologism ‘Kizungu’. Many high-quality products also earned the kizungu adjective.

Indeed, as Steve Biko observed in the 1970s, “whenever colonisation sets in with its dominant culture, it devours the native culture and leaves behind a bastardised culture that can only thrive at the rate and pace allowed it by the dominant culture. This is what has happened to the African culture.  It is called a sub-culture purely because the African people in the urban complexes are mimicking the whiteman rather unashamedly”.

Such mindsets cannot be overcome without DELIBERATE decolonisation of our education content and the governance structures that produce it. Ultimately, this project will have to trickle to everything; including how we raise our children, shape their aspirations, and tackling our sick political leadership that makes some people question and hate their black identity.

Don't worry about what Akot says because Museveni is going no where for the next +20 years as the tribalistic system ensures his post & Ugandans hold on to tribal belonging!

Museveni will rule for +20 years, will you still be young, alive, on post defending your tribe?

Akot's child & grand child have a future in Europe, is this so for parents & their children/grand kids in Museveni's Uganda?

Museveni must be happy as he'll rule for life through the pracious tribalistic system Ugandans ensure stands firm, knowing developed countries won't say a word against him as tribal lands belong to Ugandans who are keeping him in post!

Museveni must really be happy as we get at one another instead of saying NO to tribalism & UNITING against him.
Report to administrator
1234