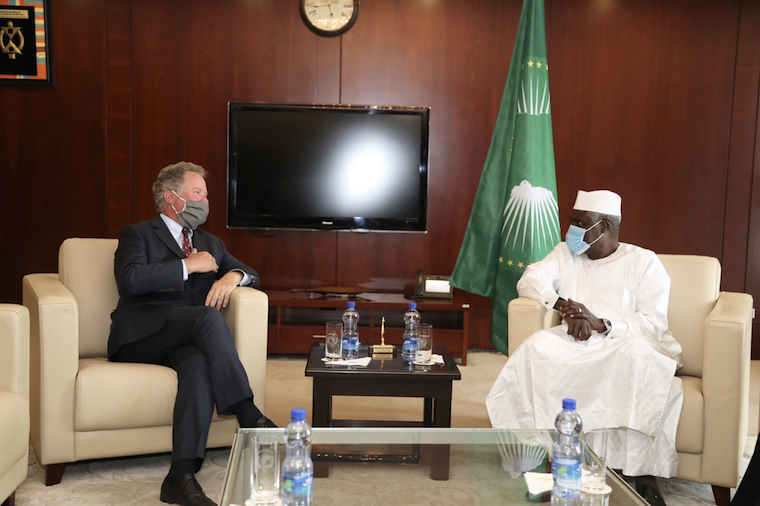 The African Union never ceases to amaze by its choice of speech on state violence. The Baganda talk of a proverbial hoodwinking cow that sleeps near the fireplace. When you hear it breathe, you think it is blowing into the fire. That is the African Union.

So last week, its chairman, Moussa Faki Mahamat, felt urgent need to add his voice to the unfortunate event of an American white policeman killing black George Floyd on the street. The message was that he “strongly condemns the murder of George Floyd that occurred in the United States of America at the hands of law enforcement officers and wishes to extend his deepest condolences to his family and loved ones”.

At this pulpit, he also urged America to sort the discrimination based on race and ethnic origin. Truly a pan-African spirit, not so? Indeed, pan-Africanism was born out of concern over the predicament of black people in Africa and in the diaspora.

The word of the AU chairman was not enough, the deputy also went to his Facebook page and added his voice: “The African Union is distressed to witness yet another unwarranted execution of another African-American male, George Floyd, for no other reason than BEING BLACK. This is one too many”. He also demanded for the case to be fully investigated. Wonderful! Extremely concerned about the well-being of black people.

We won’t blame the AU. I am sure these loving officials never receive news of killings by African governments. But even if they do, their silence to killings by African security organs is in good faith. They care so much that such news sends them into speechlessness. What would they say? When it comes to brutality by African governments, the African Union opens its mouth, as if to say something, only to yawn and remain quiet.

Oh, but maybe we just fail to hear them. I was away during the Kasese massacre. I heard that almost 100 civilians were decimated. Those of you that heard, tell me. Did you hear any word from the AU, at least a Facebook post by a sweeper at the headquarters? Did they call for a speedy investigation?

What a lousy question I am asking! How could they? That would be interference in the internal affairs of a sovereign member state. Wow! It is a smart club of team players, well equipped with selective speech.

They do not hear about opposition politicians brutally pounced on by African governments. Cameroon, Rwanda, Burundi, Tanzania, Zimbabwe, etc are far away from them. They only follow news coming from places where black lives are supposed to matter. Yes, black lives matter abroad or where whites are involved.

Here in Africa, as long as it is a black dictator hitting dissenting fellow black people, let them hit. That is a lesser evil than being hit by whites, if the latter is evil at all. If a police car drives over a young opposition activist to death in Uganda, that is lighter than a white police officer pressing his knee onto a blackman’s neck in America.

Maybe we shouldn’t be too quick to judge the AU, let’s wait until a white police officer puts his knee on the neck of an African. The knee of African governments can never be bad enough on black people’s necks as to deserve the AU’s voice.

But even the whiteman’s knee may only be bad enough if it is outside Africa. As long as the whiteman is in bed with an African government, whatever they do to the damn Africans and their resources calls for no condemnation. Those are internal matters that need to be handled with diplomatic carefulness.

We love you AU; how else would we have taught our children about scarecrows! The good news is that many African dictators have been sorted without your help. If any help, yours was for the dictators. True solidarity, they always count on you – at least on your perpetual silence about their atrocities and feigned blindness about their acts.

They can rob their countries dry. It is okay for thousands to die in abandoned hospitals as public funds are siphoned away, as long as they don’t die with a white knee on their neck. Don’t call for action. Don’t call for accountability.

At best, only pretend to care - as you wait for a news-making opportunity for condemning evil elsewhere. Seize the opportunity and pull out your robes of care to preach against black suffering and disregard. We will believe you. Trust me, we see no irony.

What do you want to condemn next? I can make some good suggestions for you. I have seen protesters in America being sprayed with teargas, and some few beaten.

Kindly condemn this use of excessive force on protestors. Don’t mind, it is abroad and, therefore, safe to call out. Condemn Trump’s threat of sending in the military to handle the protests. Say something please for international news, or else we might forget that you exist and matter.

Why would America allow all those protestors on streets? Down here, dare announce a protest against government action. Your house will be cordoned off before you wake up. Protests are effectively (de facto) illegal. But, hey! That’s none of your business. Call out those American security officers. Teach them about proper policing and that black lives matter. Africans will fight for themselves as you preach abroad. Thank you.

Having said that, most Africans are so daft that they appear to be so sorry about a dead black man in the US or the UK but caring less about brutality here at home.

I guess you know how our own security - okay - call them Law enforcement officers steal our cars and sell them to themselves... Ahaaaa.. I forgot! They even flog us like Ankole, oba, Lango cows. Others even shoot you to death!
Report to administrator
-2 #12 Juwait kali 2020-06-15 17:18
Hmmm wooden K you got this one upside down /yumbe. I think it was you who commented hia that Bank yensi yonna recently gave 500 million dollars to a corrupt /dictatorship Government with the selections around the corner. What does that tell you.?

I also feel sorry for you if you think that Government ya America is separate from African would be leaders. When the bazungu gave independence it just meant that their duties were relagated to black Africans who do their bidding sir.
Report to administrator
-2 #13 Juwait kali 2020-06-15 17:22
AKOT am with you on #7 comment wooden K woke up in a wrong bed on this one.
Report to administrator
+2 #14 kirya 2020-06-15 18:30
What about the sad situation of Uganda. A man who pretended to be a liberator but turn out to be the king of all thieves.

He turned government properties into his family holding. He is grabbing land stealing AID, loans and tax money with impunity after corrupting those in charge.

He is the engineer behind the killing fields in Rwanda.
He has killed over 5 million people.
He lives like a Hollywood star!
He is a refuge from Rwanda called m7 the dictator worse than Hilter.
Report to administrator
12