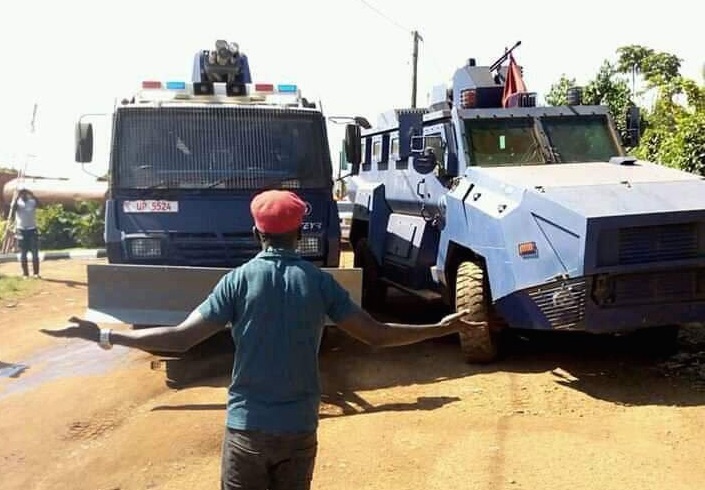 Dear all, I want to bring to your attention the deteriorating human rights situation in our country.

President Museveni’s regime is increasingly resorting to extreme means to silence the voice of the people of Uganda who are demanding the opportunity to end his 34 years of rule and his progressively brutal regime.

The People Power Movement is a non-violent movement. It brings together Ugandans from different political parties, professions, regions and religious groupings to unite in peaceful protest against a military dictatorship which violently restricts any form of democratic opposition.

The movement is demanding the independence of the judiciary, the police force, the army, the press as well as the Electoral Commission. We are struggling to ensure that the people of Uganda have the opportunity to decide their own future, for the first time since Uganda’s independence from colonial rule.

Anyone who associates with me has become a target for kidnap, imprisonment, torture and death at the hands of the Uganda security forces. These violent forms of intimidation are orchestrated mainly by elements serving in the Police, Internal Security Organisation (ISO), Chieftaincy of Military Intelligence- (CMI), Military Police, as well as the Local Defence Unit (LDU).

On February 24, 2020, a supporter and leader in the People Power movement was murdered when a police truck struck her in Nakawa division, Kampala.

At 8 am, Ritah Nabukenya, who was aged 28, was a passenger on the rear seat of a motorcycle. She had just dropped her young daughters aged six and four at school. Because Ritah and her rider were dressed in ‘People Power’ attire, they were easily identified as members of the group.

The driver of the police truck swerved to hit the motorcycle and eyewitnesses later confirmed to the media that the police truck had deliberately targeted Ritah. Ritah was laid to rest on February 25, 2020.

On our way back from the funeral, thousands of young people lined the roads of the various towns we passed through to express solidarity with the movement and to recognise the sacrifice that Ritah had made.

When we got to Nansana town, uniformed police officers as well as LDUs opened fire with live rounds on the crowd which had gathered peacefully.

Dan Kyeyune, who was aged 33, was shot through the eye and died instantly. At least two other people received severe gunshot injuries. Yet again, the police claimed that the CCTV footage of the incident was unavailable.

These two murdered people are in addition to Asuman Walyendo (shot dead on July 19, 2018 in Bugiri district), Yasin Kawuma (shot dead in Arua on  August 13, 2018), Vincent Sserugaya (shot dead on August 23, 2018 in Gomba), Yusuf Kalende (deliberately knocked by a police truck on August 27, 2018 in Luwero), Hannington Ssewankambo aka Sweet Pepsi (brutalized by the military on September 20, 2018 leading to injuries which he would succumb to in October 2019) and Lukoma Stephen Ssalongo (shot dead on June 7, 2019 in Buvuma).

Others are Michael Kalinda aka Zigy Wyne (kidnapped and severely tortured before dying on August 4, 2019), and Hakim Ssekamwa (deliberately knocked by a police patrol truck on August 6, 2019).

There are several other unreported cases where supporters have been abducted and murdered. In all such cases, there has been clear lack of interest in conducting investigations by state agencies!

In addition to these extra-judicial killings by the state, security operatives have kidnapped several supporters, tortured them and subjected them to all manner of cruel, inhuman and degrading treatment. To date, our coordinators Johnbosco Kibalama and Dias Yiga are still missing, having been abducted in June 2019.

The general levels of repression have increased. Although the Presidential Elections Act 2005 permits intending presidential candidates to carry out nationwide consultations ahead of nominations, police and the military have blocked me from reaching out to the people of Uganda for these lawful consultations.

Many of our supporters have been arrested and kept in prisons for days, weeks or months. On February 28, 2020 Julian Friesinger, a PhD student from Germany, was arrested by military operatives in Lira. He was arrested together with two of our coordinators whom he had gone to interview for his research project.

The two Ugandans (Michael Adonyo and Nicholas Oguttu) were kept in military detention for three days while being beaten. Julian, whose devices [phones, laptops, etc] and passport had been confiscated, was interrogated by ISO before leaving the country.

In another case, Moses Bwayo, an independent journalist and filmmaker, was arrested alongside eight people with whom I was working on a music project. They were kept in detention for several days and are now facing charges of unlawful assembly whose particulars include singing a song subverting the government of Uganda.

Recently, more than 50 of our supporters were being held in different prisons across the country. Some of whom were arrested for merely wearing our attire. Our supporters Denis Senono (Den City) and Bobi Young were held under military detention.

While this is going on, President Museveni has been desperately moving across the country campaigning for a seventh term with sacks of taxpayers’ money.

With the political space shrinking further and the human rights situation deteriorating, the economic condition has continued to worsen. There is little provision of basic services to the citizens.

The state of education and healthcare have continued to decline. The levels of unemployment as well as poverty are on a sharp increase. Corruption and misuse of public resources are at an all-time high.

The young people of Uganda continue to be excluded by the power structure whose only interest is enriching themselves and keeping power at whatever cost.

As we head towards the 2021 general election our demand for free and fair elections is unequivocal. We are committed to ending President Museveni’s brutal regime of blood, plunder and national shame. We call upon the world and the international community to continue standing with the people of Uganda in these very difficult times.

The author is Kyadondo East MP and aspiring President of Uganda 2021.

Akot will keep on boring Ugandans because it's just bringing down the tribalistic system & their UNITY that's needed to set them FREE, then go for the kind of governance they will want!

Tribal lands that form Uganda belongs to Ugandans & not to Museveni, right?


So, why is it Museveni who controls every institution, owns tax money?

Why will Ugandans go for yet another fake election?

Which tribal leader came out to support mp Bobi Wine, which tribal land is he allowed to set foot on & talk to Ugandans from?

Bobi Wine MUST call tribal leaders to stand down & to UNITY of Ugandans, then he will be that just one opposition leader we need to get second Independence!
Report to administrator
-1 #33 Akot 2020-03-21 21:26
As Kirya said not long ago:

Unitey means all Ugandans come out for change in big number protests, write letters voice yourselves and boycott establishment owned by m7 gang of thieves.]

Museveni will be in power for 35 years by next fake election & is assured of continutity!

The only way out of m7 dictatorship is for every Ugandan to have a gun to defend the country.

m7 has a free ticket to Rwanda.]

And the gun every Ugandan has is "joining hands, becoming ONE people, without tribal leaders in the posts Museveni gave them to ensure we are powerless against him!

Ugandans power lies in UNITY & Museveni knew this as he saw it when all the other tribes UNITED for him & Acholi had to stand down in respect, not of him, but of the UNITED tribes!

This time, the UNITY of ALL will be in respect of our children & grand children who must be assured of a different future, in a country that will belong to them as FREE citizens to decide who rules them, for how long & how!
Report to administrator
+2 #35 Lysol 2020-03-25 00:02
COVID-19 could be a blessing.

Ugandans will learn to use facemasks against the teargas and the African dictators will have to rethink its dealings with the Chinese. A complete new world order is coming.
Report to administrator
-1 #36 Wainanchi 2020-03-27 07:07
Man! Man! It is you bloody idiots and muyaye who ate using Vince to achieve your aims Did not you idiot March along Kampala streets and call Kampalans tlnarms tonusevtheir fists and stones?

LDF PIGA PIGA PIGA....YOU WANT TO CAUSE VIOLENCE ,YOU BITE THE BULLET.HAHAHAHAHA
Report to administrator
1234