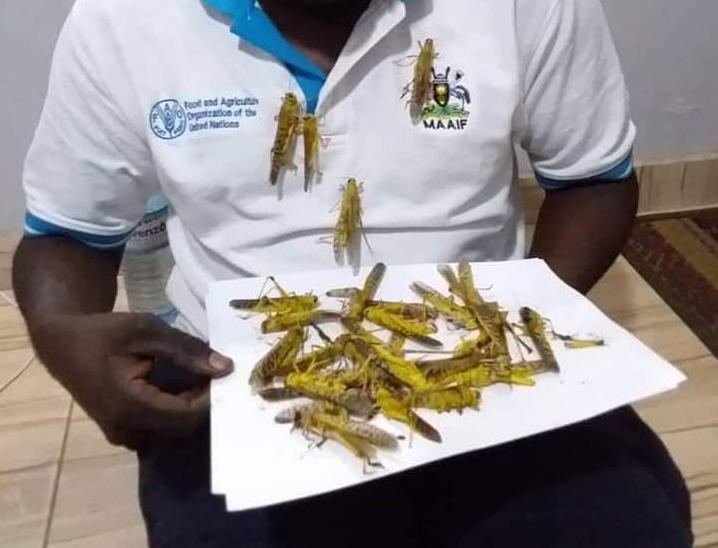 The locust issue, for me, has not been well handled with the scientific leadership that ought to define the best ways forward.

In such circumstance where we do not have first-hand experience to guide us, you bring together the best scientists holding diverse views to present objective perception of the challenge, advance hypotheses propose ways forward, and subject each to critical scientific scrutiny.

Once the science is cleared, hypotheses set, and options for critical action defined, strategies to counter the challenge can then be developed with appropriate experts in monitoring, data gathering and analysis, procurement, transportation, deployment, and evaluation, and with critical communication channels and infrastructure put in place.

The truth of the matter is that the desert locusts are best controlled in their breeding sites when still young. These locusts mainly breed in deserts and prefer sandy soils where they can easily penetrate and quickly lay their eggs before they are eaten by predators.

It is not a surprise that some swarms reportedly turned back towards Karamoja as much of neighbouring Acholi, Teso and Lango is currently covered in thick vegetation.

In the past, the Desert Locust Control Organization of Eastern Africa used to monitor locust breeding sites in arid areas of Kenya, Somalia, etc. to assess the population of nymphs that emerge. When nymphs are few, the locusts behave like ordinary grasshoppers and live individual or solitary lives, and they don’t swarm and are scattered all over.

But when nymphal densities are very high, the instinct to aggregate and move together, to become gregarious, is triggered in them. They then crowd together and even become adults in dense populations. That is when they are easily spotted, sprayed and controlled.

If these nymphs are not destroyed at this stage, they will become adults living together in large numbers. These adults will have the same instinct of being together and will feed and fly together.

In their large numbers, adult locusts feed voraciously and constantly face the risk of starvation and being easily spotted and eaten by predators. Therefore, their greatest urge is to move and mate constantly and quickly reproduce. This is what we see in the swarming and quick movements.

Once locusts are not prevented from swarming from their breeding sites, much of what we can do are matters of fate and chance, and largely ineffectual.

Thus, in our case now, it does not make sense to try and ambush the locusts anywhere and spray them. Being largely blown by wind, we can never predict their movements so as to lay the said ambush. The ground spraying teams, the 2,000 UPDF soldiers, cannot spray the locusts in flight or spray the locusts that largely rest on shrubs and trees in the bushes where movement is virtually impossible.

The use of one or two drones is meaningless in such wide, diverse, thickly vegetated and unmapped areas of locust movement where effective drone use cannot be attained (as one needs knowledge of the terrain to program and effectively operate the drones). And the greatest predators of locusts are birds, kites and hawks that fly. Locusts instinctively counter these predators by diving into the grass as many may have seen. So, as drones fly towards locust swarms, the immediate instinct is for them to dive down or land on the nearest vegetation to diminish their exposure.

Even for those spraying on the ground, the immediate response of the locusts to their movements is dropping deep in the grass. This also reduces their exposure to any insecticides sprayed.

As a matter of fact, excessive and unnecessary activities may even help disperse the locusts to areas where they escape natural predators and will breed in low numbers and undetectable populations thus worsening the after-effect of their invasion.

In the circumstance, what should be our best approach to dealing with the locust invasion?

In areas potentially threatened by the locusts, all food crops still in the fields must be harvested before the locusts arrive. If there are no crops in the fields, the locusts pause no immediate harm and are just good for eating.

Where swarms are landing must be closely identified and mapped. After two weeks, nymphs will have emerged and are visible as they aggregate. Such nymphal populations remain vulnerable because they only jump around and spread little until they become adults in two to three weeks. There is thus enough time for their presence to be reported, assessed and attacked by a spray team such as the UPDF has assembled but are now being wrongly and ineffectively deployed.

Local populations must be sensitized about the above facts and incorporated into the locust monitoring and control process.

The real challenge is whether the locusts will disperse wide enough and breed in solitude that will prevent pinpoint spraying. This will allow the locusts to remain in their breeding areas to subsequently cause tremendous damage in the next season and beyond.

Of course, with rain and other adverse weather conditions, all these worries could still come to nought. Whatever we do, though, we must base ourselves on sound knowledge and not politics and power because locusts do no respond to them.

The author is MP Agago North and a leading insect ecologist.

To little to late. Go ahead and flag my comment down, haters and those who cannot handle brutal and honest truths.

Some of you only want to hear whatever nonsense you like to hear. But not the real truth which always come from courageous people like us.
Report to administrator
+7 #12 Wooden K. 2020-02-22 12:39
Hello Kifulukwa , here we go again !

Now …. some leaders in the north are warning their natives to stop eating locusts .

Mbu :"these locusts have been sprayed with poisons which are dangerous to humans who may eat them" they now say.

What about the bats and the birds that eat poisoned locusts?

This is exactly what I thought and wrote right here.

Unfortunately , our sleepy media fears to touch these things . The media is always contented with just reporting events .
There they are now eating poison ; and here is the corrupt system spraying more and more poisons.

The locusts invasion has reached the cursed China too. The main supporter and protector of African dictators and other world's violator of major human rights.

Latigo should teach his own people how to maximize and exploit the locusts issues.

There are many of you out there who are clueless and just spraying dangerous chemicals indiscriminately without thinking of the side effects, for the many generations to come.

Why not ask the corrupt old man M7 to stop gambling with own our lives? Of course, he does not give a damn about the lives of the ordinary Ugandans.

Without bringing down the tribalistic system & UNITY to take back the country, conqueror Museveni is there for life, won't give solutions to Ugandans' problms but will enjoy their sufferings!
Report to administrator
+2 #14 Akot 2020-02-23 20:53
Quoting Lysol:

Latigo, why don't you try the delicacy of locusts? That would eliminate many of them, naturally.

Use of chemicals leave poison in the air & people/animals/plants will be next victims!

Cows in France are sick & dying dayly due to use of chemicals to fertilise soil, kill insects/warms!

Museveni & the entire system MUST be brought down, then Ugandans will get chance to start working for & tomorrow!

Ugandan professionals/educated should stop commenting, but start organising our people for common cause; bring change to give chance to real governance!

Why is Museveni still in power, protected by the tribalistic system & assured of rigging elections in peace?
Report to administrator
+1 #15 Akot 2020-02-23 21:03
Quoting kirya:

The locusts live in the state house and occupy most of the government posts!

They are the threat to Uganda well being.

We need to uproot and export them to Rwanda. The little insects annoy but not as much as the bushmen!

Tribal leaders MUST stand down NOW & UNITY will show Museveni & his people in State House way out!

Then Ugandans will have to form the kind of governance they want, do real business with the rest of the world & put in place public/social systems with tax money!

Why is Uganda Rwandese territory while Ugandans ensure it remains so through the tribalistic system that disempowers Ugandans?

Why do Ugandans prefer Museveni/rwandese control, to;

Latigo, the pretend entomologist only came out with this article after being pointed out by one Lakwena and me.

To little to late. Go ahead and flag my comment down, haters and those who cannot handle brutal and honest truths.

Some of you only want to hear whatever nonsense you like to hear. But not the real truth which always come from courageous people like us.

Only those who still love & hope Uganda will be FREE of Museveni/rwandese have guts to critisize knowing polite comments only ensures peace & Museveni's life time rule!

Can Ugandans imagine if tribal leaders stand down in stead of serving Museveni & not giving chance to UNITY that will leave the migrant landless?

Now some leaders in the north are warning their natives to stop eating locusts.

Mbu :"these locusts have been sprayed with poisons which are dangerous to humans who may eat them" they now say.

What about bats and birds that eat poisoned locusts?

5 years from now, people in the north will be "nodding" while Prof. Latigo takes cover somewhere in Wakiso.

No one is safe with any poison contamination as it found in; air, water, food!

Europe woke up, too late & is faced with cancer/other illnesses caused by use of chemicals/insecticides in farming!

Museveni is a dangerous poison Ugandans don't need insectiside/chamicals to get rid of, but just UNITY!
Report to administrator
12