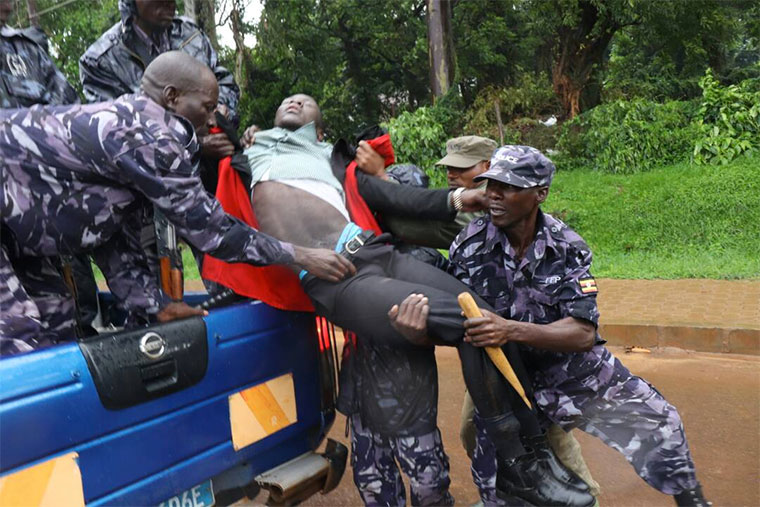 Sometime last year, in downtown Kampala, I accidentally stepped on a man’s foot.

I cannot measure how painful it might have been, but the anger seemed to be way out of measure. He shouted: ‘Nyoko! Olwokuba olina engatto empya kyova oninnya?’

I’m unable to translate ‘nyoko’ in this context, but it ordinarily means ‘your mother’. He was also angrily wondering if I stepped on him because I had new shoes. I laboured to explain how I meant no harm, but my efforts only earned me more: ‘yasamira muli’. Another hard one to translate, something to do with shutting me up.

I simply gathered my insulted self and left. He didn’t look that relieved by the insults, but a little calmed. Whereas this does not represent Uganda or the entire city, it is not an entirely isolated event. Many Ugandans can relate to occasions where they have had to deal with bouts of disproportionate rudeness, rage and violence whose origin they could hardly understand.

It is indeed true that generally Ugandans are hospitable people, but that this is mostly a rural phenomenon tending to be more where the fangs of capitalism have dipped less into the social flesh. I won’t pretend to have a general theory to explain our social behaviour, just a sketch of observations that may not hold in general terms.

The violence of our police, for instance, may now need no introduction internationally. Because theirs was named Uganda Police Force, they seem to have taken the word FORCE literally. Recently, having introduced myself as a Ugandan at a seminar about decolonisation at the University of Cambridge, one of the participants caught up with me at the end and showed me a recent video of a Ugandan police officer kicking the head of a subdued person.

He sarcastically wanted me to verify if that was not a doctored video. Not wanting to reinforce the negative depiction of Africa in the West, I neither confirmed nor denied it but found a way of changing the subject.

But nothing in it was really new to me, I had seen worse – which is just the little that gets to the public eye. What happens in police cells under the certainty of no cameras could be more horrific.

For me, the more important question, which connects to many others, is: how does a human being get to this level of no feeling for the pain of a fellow human being? Where is all this brute anger from? Whereas this is at the public extreme, it is increasingly reflected in various forms in many other public and private spaces.

Uganda’s social media presence is most generally defined by rage, rudeness, anger, insults and bullying. This may not be exclusive to Uganda, but it becomes more baffling when seen against the Ubuntu and hospitality with which we prefer to define our sociality. A Congolese friend keeps telling me how he respects Ugandans when it comes to the art of insult.

Yet, apparently, it is not just because it is the ‘unpolished’ that populate social media. It is largely because the curtains of social media permit us to pull out our beloved rags and to climb over walls of power to wage war by verbal artillery. Our residual politeness may still restrain us in physical spaces. But in any case, many physical spaces are brutally policed.

From my, perhaps limited, experience, dictatorial homes, schools and workplaces (bosses) averse to dissent, and where command is the pervasive mode of engagement are both producers and outcomes of the anger we experience on the streets, in taxis, social media, etc. Beneath all this are often feelings of deprivation, injustice and inequality that fail to find proper expression, and thus channelled out tangentially.

Of the mother that burns her child’s hands for losing five hundred shillings, what would psychologists say? Of the people that deliberately knock dogs dead and scream in excitement, what could that be? The parent or teacher that canes a child to bruises! It could simply be normalised brutality that becomes cultural, but it could as well be an indicator of other internal forces.

I find much sense in what psychoanalysts call ‘defense mechanisms’, relatively involuntary ways of coping with everyday problems and stressors that we may not have the power to address. The stressor could be poverty, failure to access basic needs, difficult relationships, strenuous or abusive workplaces/bosses, sickness, bereavement, struggling businesses, or even bad weather.

One possible defense mechanism is denial, which is sometimes expressed in extreme religiosity that tends to fetch consolation to suffering by dismissing worldly life and desperately handing everything to God. ‘God is seeing our bad leaders’; one might helplessly say. But this mechanism may not explain the anger.

The more relevant defense mechanism here is what is called ‘displacement’. This involves misdirecting our pains or stress towards something or someone less powerful/threatening than the actual source of our anger. Just like a dog stressed with disease tends to be more irritable than a healthy one. This is how social media helps many of us to offload our baggage of stress onto someone or something we can insult to get some temporary relief from our actual problems.

Whereas sometimes it is just poor upbringing, in some cases, since we are distant from each other, we never get to know that the person who dumped a rude comment on our post was not sure of where to find lunch or was struggling with an abusive relationship. Many are young people offloading pressures of joblessness both by attacking each other and their real or perceived oppressors. ‘A hungry man is an angry man’.

The brutal police officer too might be transferring the anger of his terrible work conditions and trying to prove to himself and his victims that not all is lost from him. At least he has some power over other victims - a prefect in hell.

It's Ugandans blocking mp Bobi Wine from singing, addressing them is proof that there is no need for the coming fake election!

Without tribal leaders standing down & UNITY, Independent Tribal States MUST be formed & we will see how Museveni will use army/police against which tribes & from which tribal land!

It's time UN/EU start relocating migrants/refugees they resettled in Uganda before Ugandans' anger blows up!

When Amin realised he had lost, he left & sudanese serving him left in a hurry & those who couldn't were killed on streets, villages, along Gulu/Kampala road & Kampala/Jinja/Tororo/Lira roads!

Why don't tribal leaders stand down to give chance to UNITY that will show Museveni way out, then go back to their posts, this time not sworn in by Museveni, but them taking responsibility?
Report to administrator
0 #22 Akot 2020-02-09 19:31
Lysol, understood, but,

Police is ensuring no one defies Museveni, just as court locked Dr S. Nyanzi in prison to ensure no other mocks the demon!

This is why, without tribal leaders standing down & UNITY, mp Bobi Wine MUST NOT put himself in danger any more. Growing up under Museveni & fighting him can only be done without any Ugandan being hurt or them hurting one another if the tribalistic system is sbrought down & UNITY of our people tells Museveni NO!

When UNITY throws Museveni out, Ugandans who maimed, teargased, blocked...their own for Museveni will be brought to justice & this, only after putting in place a viable government!

Museveni MUST be thrown out FRIST in UNITY to stop him using Ugandans against themselves, stop Ugandans in post turning blind eyes/deaf ears to suffering of their own people!
Report to administrator
0 #23 Lysol 2020-02-10 22:19
Ref; To Lady Akot
Unity can never be imposed. Ugandans can never be one entity, because it's many tribes (a curse)

To get rid of the corrupt regime there is no need for the rest of Ugandans to unite.

A few organized and true patriotic groups or individuals can easily get rid of his corrupt regime. Didn't he claim that he started with only 27 men(which is false) to take power?
Report to administrator
0 #24 Akot 2020-02-13 19:41
Lysol,

As long as migrant chief tribal leader Museveni is on, no tribe is in trouble with the others & if any tribe gets rid of Museveni, the rest will get rid of that tribe immediately after!

Uganda is formed by tribes & they are ensuring Museveni rules for life in peace, & the outside world will continue in silence respecting Ugandans' choice!

But when Museveni will be no more, Ugandans will be face to face with reality & Museveni won't be around to be blamed!

Tribalistically divided & ruled by Museveni, no tribe is yet in trouble with the others as non from a tribe is chief tribal leader/fake president!

Then WHAT, when Museveni will be no more?

Isn't it time Ugandans start thinking about AFTER Museveni, instead of denying they are a conquered people, tribalistically divided & ruled & it's them keeping the lucky conqueror in power?

If developed world finally understood the Uganda tribalism, why don't Ugandans who pay allegience to tribal belonging do so & be masters of their tribal lands & land riches?

Why does migrant Museveni controls every institution, owns tax money, is the only ruler while Ugandans ensure his continuity by terrorising one another?

Is this belonging to the country fromed by our tribal lands & does it make sense?
Report to administrator
123