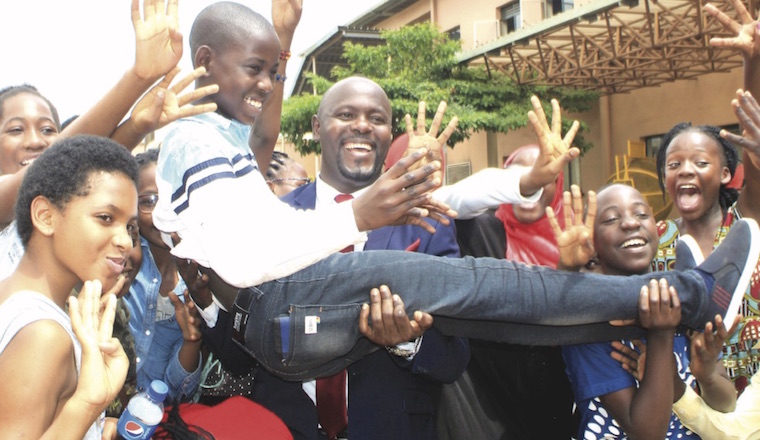 Teachers and pupils of Gombe Junior School carry their star performer, Daniel Ddumba, who got aggregate 4 in PLE

The best education remains with the person even after he or she is done with studies, experts say. It is not the high exam scores that determine the future of any person.

The media is once again awash with images and stories of victors in the just released Primary Leaving Examination (PLE) results. The release of exam results means different things for school owners, pupils and parents.

The motivation of parents in publishing photographs and names of the high performing pupils could be an ego thing- a kind of exhibitionism, displayed by those whose expectations have been exceeded.

For school owners the agenda is different. Some have made outright advertising on radios, televisions and newspapers. Others have even gone ahead to fabricate results in a bid to lure unsuspecting parents to their schools.

The enthusiasm with which these school owners are dashing to newspapers and other media to trumpet their performance should offer a sharper glimpse into how education has ceased to be what it ought to be.

It must be observed that the race to advertise is a preserve of non-traditional schools. This is the ugly side of privatization of education. Education is no longer the public good that should be given by the state.

Private entrepreneurs whose goal is to maximize profits have turned this good into a race. And this has inevitably led to examination malpractices and eventual withholding of some schools’ results. Sad as it sounds, most private schools are owned by teachers, whose interest should be the educational demands of the pupils. Unfortunately, the reverse is true.

The teachers turned-owners look at the balance sheet of the school (company). And because of the cut throat competition some teachers have convinced some parents to buy exams for their children. What a society! The essence of education as projected by some school owners is success in exams and nothing more.

This kind of system, which emphasizes passing exams and not learning and retaining knowledge, will have a devastating effect on all students who have gone through such an arrangement. Soon the Uganda certificate of Education (UCE-O levels) results will be released and the country again will be thrown into the same mad dash for advertising.

We need to evaluate our examination system and establish whether we are not moving towards unintended results. Parents shouldn’t fall for these entrepreneurs’ wiles. The ministry of education should also rein in these errant schools, which promise more than what they can deliver.