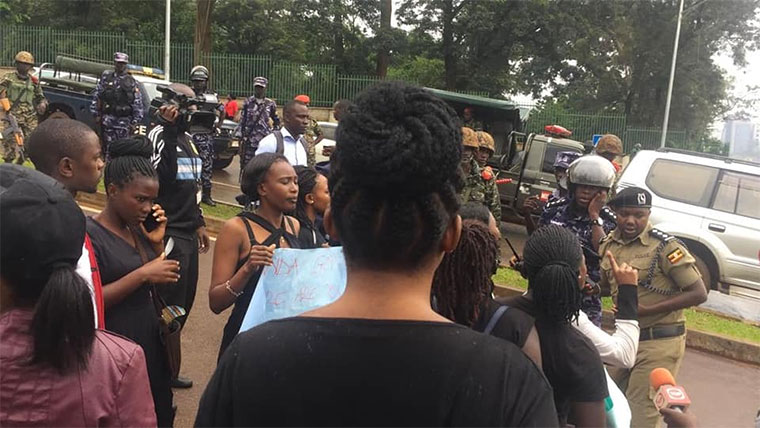 Student guilds have historically provided the training ground for the next crop of leaders and activists. Activism defines a university.

Indeed, colonialism’s reason for not establishing universities in Africa – but technical colleges – was the fear of breeding the next generation of anti-colonial activists. Between 1960 and 1974, students at the University of Addis Ababa led a movement that brought an end to the authoritarian monarchy of Emperor Haile Selassie.

This means, there is something special about a university that encourages and motivates activism among its students.  It could range from their readings (Marx, Fanon, Soyinka, Césaire, etcetera) to their age group – in twenties full of youthful exuberance, and bravery etcetera. This then means, teaching and encouraging activism is a core part of the university.

But how did Makerere become this brutal and authoritarian, and self-destructive to the point of legislating against itself – against student activism, and staff trade unionism? That students and faculty can be brutalised and summarily dismissed for protesting against items they deemed unfair and unjust? How did we get here?

Academics at Makerere University with power need to explain themselves. They are now in bed making mad love with the merchants of the state. I will tell a story of one conflicted academic at Makerere, Prof Mahmood Mamdani.

Didn’t he recently label colleagues in Makerere University’s trade union, MUASA, a bunch of “regime change intellectuals”? Yes. His secret affair with his otherwise authoritarian contemporary, Yoweri Museveni, epitomises the crisis at Makerere. A deep NRM-blessed businessman recalls his surprise encounter on a visit to State House sometime in 2010 or thereabouts.

As he ambled his way through the corridors and lobbies of the president’s lodging, he found Mahmood Mamdani on his way out of the office laden with a sumptuous characteristic brown envelope. He was shocked to find Mamdani in these quarters for Mamdani struts his frail frame around as an anti-authoritarian intellectual.

What was he doing here, he wondered.  Then the penny dropped after the businessman received the same envelope that he had seen Mamdani loaded with. Its contents were cash. A lot of it. The type whose sum is said to be estimated on weighing scale.

A year later in 2011, Mamdani would take the job of director of Makerere Institute of Social Research (MISR), one that – as Senate recently confirmed – he runs like it were a shop inherited from his father selling ice cream and chocolate.

We all recall that upon clocking the age of retirement in 2016, Mamdani, by a presidential directive, earned himself another five-year contract, whose disguise for procedure is a story of tragicomic proportions. See, Mamdani wrote the advert for the job, which he applied for and now holds.

The message – labelling underpaid labourers demanding better pay as “regime change intellectuals” – as was rightly understood despite subsequent denials, and obfuscation – was meant for President Museveni to come and intervene directly.  Museveni was meant to read the message as, “these men are occupying Makerere but their eyes are on your seat. They will soon be occupying the state.” It was such an ugly piece of writing.

As a celebrity scholar, who is also a convenience-cocotte-like friends with the vice chancellor, Barnabas Nawangwe, Mamdani’s bizarre dealings with the state tells the story of Makerere’s turn to anti-student activism and authoritarianism.  It is around this time that Makerere sought to outlaw student activism and trade unionism – with the suspension/dismissal clause.

The friendship that Makerere’s top leadership have with President Museveni has transformed Museveni’s fears in national politics onto the university space. It is as if Museveni directly runs Makerere.

If the only real threat to Museveni’s presidency is student/streets protests, then any form of it anywhere in the country has to be dealt with brutally and decisively. Museveni’s surrogates at Makerere – Mamdani and Nawangwe and several youthful co-conspirators with power – started by legislating and actually dismissing staff, and students involved in any activism.

One fully understands this Mamdani-Nawangwe-Museveni fear, and thus the brutality at Makerere University upon learning that student protests against Emperor Haile Selassie in 1966 in Ethiopia started as simple campaigns for good education, and improved living conditions for the poor. Then the entire house came down.

0 #1 Akot 2019-10-30 17:41
Uganda is conquered by Museveni, but this is not evident as he is black, so Ugandans fight themselves instead of fighting him, the colonial authority who is millions of times worse than white British!

Even so called educated Ugandans don't see that the tribalistic system is the means keeping Museveni in power & will be so unless tribal leaders stand down/forced to & UNITY of ALL blocks & forces the colonial emperor out!

What will Ugandans do when conqueror Museveni will be no more, but the tribalistic system will be his legacy?

What will tribal leaders do without Museveni, will they form independent tribal states then & bcome real leaders of their people, manage land riches, serve them?

Ugandans can pretend not to be concerned about after Museveni, but they must know he too, is human & will 1 day die & they will have to face one another!...
Report to administrator
0 #2 Akot 2019-10-30 17:56
...Why are Ugandans who are not at armed war against one another, slaves of migrant Museveni they were kind to give shelter to?

Why have Ugandans resigned to the fact that it's Museveni & no other to rule them & just wait for him to finally serve them, after +33 years?

Why is migrant Museveni chief tribal leader in a zone he has no tribal land in, yet controls every institution, owns tax money/land riches & is the only ruler?

Museveni is safe in power & there will NEVER be a common National leader as long as the tribalistic system stands!

Museveni knows this, but Ugandans don't, WHY?

The tribalistic system protects Museveni, yet our people are the last to see/know it, even now knowing that no outsider will say a word against Museveni as long as we are alright with the system!

Which outsider would dare say a word against Museveni when it's Ugandans fighting one another to ensure Museveni rules for life without opposition, without being mocked by Dr S. Nyanzi, locked up in prison by Ugandans, to teach her & any other, what awaits if they get at god Museveni?
Report to administrator
+3 #4 Apollo 2019-10-30 22:51
Prof. Nawangwe spent his youth-student years in cold war-era Soviet Union and married his wife then, a Ukrainian, while there.

Much of Prof. Nawangwe's world view was shaped by this highly authoritarian, subservient, suspicious, insidious and intolerant environment.

Therefore, when confronted by western notions of free expression or thought as core tenets in a progressive University, Prof. Nawangwe finds himself totally incapacitated and thereby withdraws into territory most familiar to him.
Report to administrator
+1 #5 Lakwena 2019-10-31 10:21
In other words Yusuf, it is a pity that Prof. Mamdani who has been internationally held in high regard for independent mindedness; is unfortunately petty and treacherous, cam aloopa like a disgruntled sibling seeking more attention from an abusive father.
Report to administrator
+1 #6 Lysol 2019-11-02 00:51
Many fearful Uganda leaders have always hated Makerere. Ever since Museveni failed to joint Makerere in the 60s he hated it.

Amin was rejected by a lady form Makerere, so he sent his State Research agents to bet up the students and many were killed.

It was only Obote who was loved by the students and respected there. Of course, when Amin took over power, Obote helped Museveni and many others to joint Dar-es-Salaam University.

That was was sent on a road trip to Mozambique to document/write and essay how to become a guerilla.The rest is history. Some of us remembered how the students from Makerere demotrated freely in downtown Kampala after Amin's fall. Museveni was there and smiling.

Later, Lule on the advise of Museveni and his friends shot at the students at another demonstration when Lule was removed.
Report to administrator