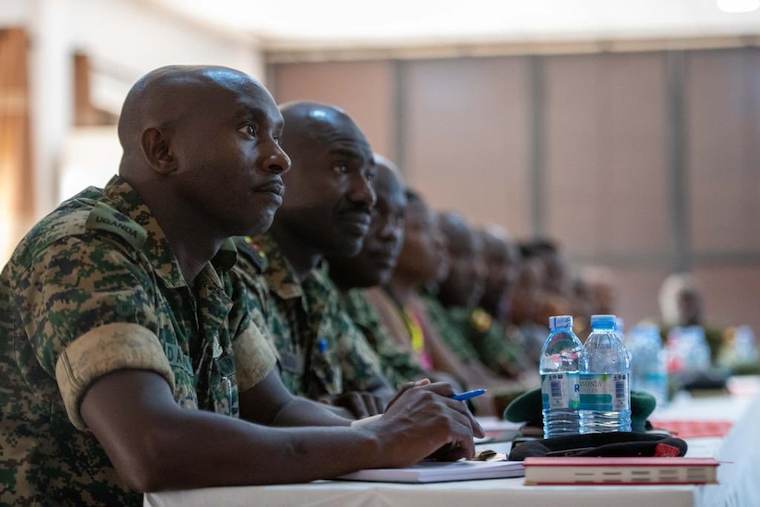 Ugandan army officers during training by the British army

When the Uganda People’s Defence Forces (UPDF) early this week advertised official military attire, marks, symbols and red berets or any similar clothing as exclusively their own regalia in the Uganda Gazette, the coincidence seemed glaringly fishy – coming at a time when the biggest wearers of the berets, the Hon Robert Kyagulanyi (Bobi Wine) led People Power Movement, had easily owned them publicly as a “symbol of their resistance.”

People Power Movement has immediately complained of being targeted. From this gazette, the UPDF has decreed to own the red colour. One would have thought that a proper description of the beret, including its specific shape, design, texture of material, colour and other distinguishing features would have sufficed in that particular gazette.

But now it appears, there is a general assumption that every red beret is the property of the UPDF and, therefore, if one does not get permission to wear it, that person would have infringed the UPDF rights and Act.

The army authorities claim there is nothing sinister in formalizing their uniforms. In fact they claim this process began way back in 1997.

“The dress code for the UPDF (Uganda People’s Defence Forces) has been gazetted. The action was endorsed by the top organs of the army, which also commended the dress committee for concluding the task assigned to it years back,” Army spokesman Brigadier Richard Karemire said in a statement.

The red beret is a signature “symbol of resistance” for the People Power Movement. The UPDF may find it harder to explain away their involvement in political games, given that a few days before this official gazette, a high-ranking army officer had instructed crime preventers to arrest anyone found donning a red beret.

There is fear that the ruling National Resistance Movement (NRM) is influencing the army to do its political work of denying or diminishing the opposition political space. The Constitution guarantees freedom of expression and the right to associate.

UPDF being one of the agencies of the state, ought to be impartial and support all Ugandans of whatever description, in their efforts - as long as they are lawful - to attain their fundamental rights and freedoms.

Civilized and democratic societies such as Uganda are governed by law. However, it is dangerous to turn the law into an instrument of oppression.

There should be a universal application of the law. The importance of laws being uniform in their application is generally accepted as fundamental to their doing justice. The army should keep off politics and remain impartial.

We saw examples of Lybia and Syria where in the first case we have now African slaves who are being exploited by Lybians , ie the migrants who have no choice but be slaves, adn Syria where it took long time to exterminate weavels sawn by foreign masters.

If gallant Russia didnnit help, Syria would be another wasteland by caused by the West. Forward gallant UPDF capture all thigs who are disguising under foreign inspired attire.No passaran!!
Report to administrator
+1 #2 Lakwena 2019-10-03 12:42
Quoting Wainanchi:

Humbly I disagree! By that logic, Army should sit down and look how thugs and enemies are devastating the country.

We saw examples of Lybia and Syria where in the first case we have now African slaves who are being exploited by Lybians , ie the migrants who have no choice but be slaves, adn Syria where it took long time to exterminate weavels sawn by foreign masters.

If gallant Russia didnnit help, Syria would be another wasteland by caused by the West. Forward gallant UPDF capture all thigs who are disguising under foreign inspired attire.No passaran!!

But Wainainchi, it is the NRA thugs that wrecked havoc in Luweero and captured power thru organized terror and mass murder.

In other words, except the change of name from NRA to UPDF, nothing has changed: From Mr. M7 downward, the UPDF leadership is still made up of the same Luweero organized thugs and mass murderers .
Report to administrator
+2 #3 Lakwena 2019-10-03 13:09
In any case Ugandans still have to be reminded that Mr. M7 once insinuated that the Constitution is just a piece of paper that cannot prevent him from doing whatever he wonna do.

Unless they turn on him, the military is his functional tool to cling and abuse office and power. E.g. for 13 years (2005-2018) he used Gen Kayihura to keep off Dr. Besigye and dumped him (Kayihura) last year.

He still holds Gen Tinyejusa hostage after using him to terrorize, murder and subjugate the people of Acholi Sub-region who had rejected him from day one of his occupation of State House in 1986.

That is how and why Mr. M7 causes the amendment of any of its section, which is an obstacle to his stranglehold on power and state capture. Hence with sweat, he removed the Term and Age Limit from the constitution.
Report to administrator
+4 #4 Lysol 2019-10-03 22:58
The so-called UPDF (Uganda People Death Forces) a personal militia and mercenary of Museveni cannot stay out of politics.

They are there to to keep the corrupt dictator in power for life. They will be dissipated once the dictator is gone.

Not impartial and a national army. It will go with the owner like many before it. It only good for policing(peacekeeping)failed states and harassing the oppositions. No real combat readiness. SOMALI.
Report to administrator
0 #5 Akot 2019-10-09 19:19
Lakwena,
Lysol,

As long as Ugandans maintain the tribalistic system, go for fake elections, the army/police will go along with Museveni!

Bun once the entire system is brough down & Ugandans come out in UNITY, police/army will have no choice but to take sides;

- go with Musevnei to his tribal land, or

Egyptian security forces sided with their leader until the people UNITED against!

Which tribal land will be base for Museveni this time & which tribes will go with him to fight & get him back to power?

Is there just 1 reason Ugandans still need/want Museveni & won't say NO to the tribalistic system & UNITE to throw him OUT?

Is there any reason tribal leaders maintain the inhuman divisive tribalistic system that keeps Musevnei in power but locks the outside world out?
Report to administrator
0 #6 Akot 2019-10-09 19:38
Lakwena, thanks!

Without UNITY of all the other tribes that UNITED against Acholi to bring in Museveni, Acholi MUST now do the right thing for themselves:

*Break Away & form Independent State & this is especially needed as the Republic of Uganda doesn't exist any more!

With the tribalistic system & being part of it, Acholi won't get help from even UK this time!

Acholi are part of the inhuman system & forget Museveni still hates them, but wants to make Acholiland his military base, give Amuru to Chinese to farm!

Uganda is a fake nation, yet Ugandans are the last to know this & go blindly legalising Museveni's dictatorial imperialistic rule through elections only the demon wins/will win!

Why are Acholi part of the system that will make them finally landless officially, legally, constitutionally?
Report to administrator