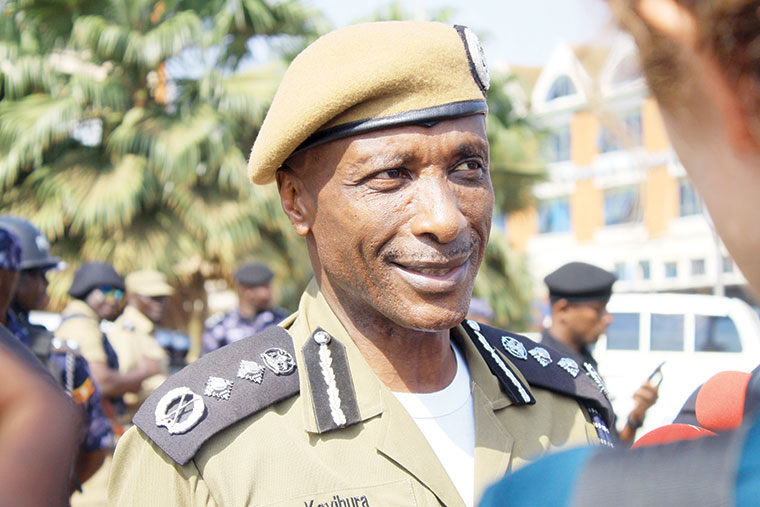 Former Police chief Kale Kayihura’s thin veil of normalcy out of public office was pulled down last week when the USA slapped a travel ban on him and his immediate family.

Anytime, the Donald Trump administration could lean heavily on Uganda to extradite Kayihura to the United States of America (USA) to answer charges of his involvement in corruption, torture and abuse of human rights. He no longer has the iron shield of army and police protection.

Last week, the US Treasury Department’s Office of Foreign Assets Control (OFAC) imposed sanctions on Kayihura for serious human rights abuse and corruption. These sanctions mean that all property and Kayihura’s interests in property and of any entities that are owned directly or indirectly, 50% or more by him alone or with other designated persons that are in the USA or in possession or control of US persons are blocked and must be reported to the OFAC.

Naturally, Kayihura has denied owning any property in the USA either directly or through proxies. It was under Kayihura’s 13-year stewardship of police that the country was gripped with some of the yet-to-be-resolved heinous murders such as that of former Assistant Inspector General of Police Andrew Felix Kaweesi.

Several tortures under his very nose were carried out at the infamous Nalufenya police station. This torture chamber was closed by the current IGP Martins Okoth-Ochola. Kayihura for a long time while he superintended the police force managed a budget of about Shs 600 billion.

Some of this money was used to recruit rogue agents such as the Kiboko squad and Boda Boda 2010 who tortured members of the political opposition. And some of the money was used in corrupt practices such as buying political loyalty for the ruling National Resistance Movement (NRM).

Unfortunately for Kayihura, it appears now that he has to answer the charges alone, much as he may have been overzealously trying to please higher-ups. There are lessons to learn from Kayihura’s predicament; impunity never lasts.

He cannot claim to have tortured political opponents at Nalufenya on behalf of the powers that be. Unfortunately, it may appear, the state cannot be vicariously liable for his crimes. He cannot be protected either for having tortured people. He will have to face the charges alone.

This takes the form of recruitment and unfair promotion of rogues who have formed well connected extortionist rings in Police.

Innocent people are routinely arrested on baseless charges, kept and/or tortured in Police cells until they pay a ransom. Land grabbers are protected by very high rogue officers. They have the law, the uniform and the gun. This is the legacy of this deadly man.
Report to administrator
0 #3 Joseph 2019-09-20 12:10
It is not USA that can free Ugandans from these rogues..........from top to bottom!!!
Lord hear my prayer!
Report to administrator
+1 #4 Lysol 2019-09-20 23:35
Quoting Joseph:

It is not USA that can free Ugandans from these rogues..........from top to bottom!!!
Lord hear my prayer!

Just ask and they will help. There are many ways out there.and individuals. Just keep on looking and praying. Never give up!!!
Report to administrator
+2 #5 Zaitun 2019-09-22 09:41
Where as I concur with the US slap on this man whose police maimed many Ugandans and made many a parent childless, we should not forget that he worked for US colonialism in Uganda, East and Central Africa.

The real big fish behind all Uganda's troubles are still there in Office, to date, torturing innocent Ugandans. If I am wrong, what has stopped since he left Office- Ugandans keep getting kidnapped, assassinated, tortured like slaves during the Roman Empire.

All the rogue Ugandan military men and politicians who have killed, robbed, maimed Ugandans should be held responsible for their acts.

If the Donald Trump administration is serious, since Kale claims to have been working with the US, Museveni govt should also be brought to book right from the day they seized power after leaving many skulls everywhere in Uganda, Rwanda, RDC, Central Africa and South Sudan.
Do not only pick an individual just to make Ugandans happy.
Report to administrator
0 #6 sula 2019-09-23 10:42
The wounds inflicted by Kalekezi Kayihura on this country are still wet , even talking about him inflicts further pain to this country.

I wonder how deep his name can be buried for people to feel some relief. Let us leave Kalekezi to carry his cross.
Report to administrator