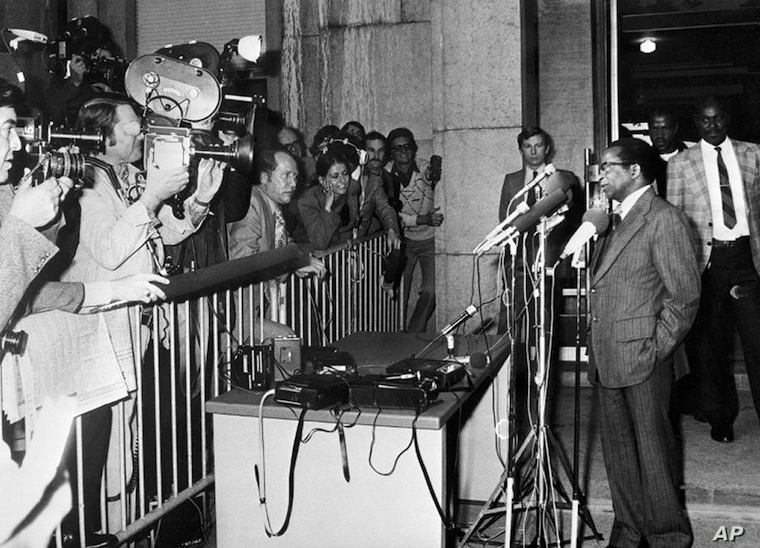 Like Uganda’s Amin – but unlike South Africa’s Nelson Mandela – Robert Mugabe fully understood that national liberation meant little if it was not underpinned by popular economic emancipation.

That is why Amin and Mugabe became enemies of the West, but Mandela was embraced as an icon. The people celebrating Mugabe’s fall do not understand imperialism. Mugabe’s true legacy will be appreciated in the coming days.

Discussions about Robert Mugabe’s excesses as a classic “African dictator” are incomplete without comparisons with Uganda’s Idi Amin. Interestingly, as Amin was leaving power in 1979, Mugabe was just ascending as a victorious anti-colonial hero.

He became Prime Minister of Zimbabwe in 1980.  Having come to power after dislodging white-settler minority rule, he has been compared to South Africa’s Nelson Mandela, another dark-skinned man who came to power ending white minority rule 14 years later. While Mandela is [uncritically] considered a universal hero, Mugabe, just like Idi Amin, easily takes the slot for universal villain in his time.

In both countries, South Africa and Zimbabwe, the end of settler-white minority rule presented the anti-colonial intelligentsia with similar challenges in their different contexts: a political and economic question.

While South Africa opted to settle the political question (without a definite timeline on the economic/land question), as many ANC leaders sought to profit from the struggle under the claims of strategic compromise, Zimbabwe’s leadership, on the other hand, viewed liberation as intrinsically linked with the economy. Thus liberation meant an aggressive and simultaneous pursuit of political and economic reforms. This is where the Idi Amin comparison to Robert Mugabe becomes more appropriate—liberation could not simply be political.

Many times, my elderly interlocutors have emphasized that the only time Ugandans felt truly independent was when President Amin declared his economic war in 1972, demanding that people of Asian descent leave the country in 90 days. Ugandan academic of Indian descent Mahmood Mamdani, who was one of those booted out of Uganda, has referred to the same reality of Ugandans feeling independent only after 1972.

Since most Indians banked in British banks and held British passports, the UK which benefited most from their presence in Uganda—having brought them here in the first place—had to deal with the situation of either sanctioning a run on their banks or accepting an influx of Indians into the United Kingdom. England grudgingly settled for the latter, and went on to embark on an aggressive anti-Amin campaign.

With a combination of tight economic and political sanctions, and a largely illiterate mass, which had been hitherto structurally kicked out of business, the country’s economy collapsed.

Sadly, the collapse of the Ugandan economy during the Economic War is often read as a result of Amin’s uneducated judgment, yet it is the absolute affirmation of how native Ugandans had been condemned to the backwaters of business.

Yet, for many Ugandans, Idi Amin remains their true anti-colonial hero—a picture that continues to become more perceptible every passing day. This expose of Idi Amin helps to put President Robert Mugabe in proper context.

The picture that quickly emerges is that Mugabe and Amin have a lot in common, which undergirds their international—mostly Western/European and North American—revilement.

Firstly, both men saw national independence through the lens of economic independence.  If it was liberation of markets for Ugandans, it was land acquisition for Zimbabweans. By independence, 700,000 Zimbabwean farmers were squeezed to 53% of the country’s poorest lands, and a 6,000 white settler community, majority of whom were not native/pioneer Zimbabweans, owned 15.5 million hectares of the country’s most productive lands—selling to fellow whites arriving from Great Britain after World War II.

Secondly, both men saw liberation as a process that ought to mirror its opposite, colonial exploitation. In very Fanonian terms, if the colonizer exploited the native through the use of violence or force (land grabbing, state-structured monopolies), so the process of liberation had to be forceful.

Zimbabwean war veterans used tactics of war to mobilize the acquisition of land from white-settlers in the 2000s, which in many cases were defined by violence. With these forceful acquisitions, both under Amin and under Mugabe, their economies were forced into pandemonium, a situation that would be cheerfully dramatized by the British/American media framing them as the world’s foremost nincompoops! But this collapse was often exacerbated by meticulous and aggressive acts of sabotage by compradors.

The result of this was that Amin and Mugabe both became more high-handed, ruthlessly responding and haphazardly defining to treasonable activities of the comprador elites. Many were jailed while others were summarily executed. It is also worth noting that both men were once darlings of Great Britain (with Mugabe even receiving a knighthood!).

Zimbabweans’ anger against Robert Mugabe ought to be appreciated as a three-pronged complex—with nothing to do with Mugabe’s politics and economic reforms but, rather, Mugabe the individual, who also operated against a hostile and malicious capitalist backlash.

Firstly, like several other post-colonial regimes, the challenges of state-building were extreme in their manifestation. Political administration was difficult tending towards dictatorship and sometimes civil war as the anti-colonial intelligentsia had to contend with innumerable challenges in the context of stealthy aggressive neo-colonial capitalist empire, which wanted to sustain economic control even after granting independence—and fancied working with elite compradors.

It was not unique to Robert Mugabe who stands out as our foremost universal villain. The struggle for a truly national identity also complicated matters as accusations and tribal and clannist tendencies terribly cracked state-building projects—as has been variously claimed in the land reform initiatives in Mugabe’s Zimbabwe.

It is evident that the only thing that remained in Mugabe’s coat was his anti-colonial legacy, whose lustre became more unattractive the more the colonizer fetishized herself as benevolent despite remaining vampirish in character.

Lakwena, it seems we are on the same page. It is called the 'good governance' page.

Whether in America or Africa, good governance or bad governance look and feel the same. We should be talking about going on vacation to Zimbabwe.

Instead, we see a country that is bleeding. Even the replacement is a tyrant. So when Mugabe is buried he will be like Pharaoh. He will be buried the nation's hopes and dreams.

In other words Winnie, Zimbabwe's Independence was a stillbirth.

The Zimbabweans have to start from scratch where Mr. Mugabe caused the unfortunate miscarriage.
Report to administrator
+3 #12 Lysol 2019-09-12 21:30
On another note it was actually Joshua Nkomo who should have led Zimbabwe as president instead of Mugabe.

Mugabe outsmarted him because as teacher he was articulate and young to the British at the Lancaster conference.

Nkomo later served as a vice-president before he was ousted/died. The same thing Museveni did with one Professor Lule the original founder of the NRM/NRA before M7 got rid of him.
Report to administrator
+1 #13 Akena Moses 2019-09-16 14:01
I don't believe that Mugabe from the onset believed in economic emancipation through land reforms.

To the contrary Mugabe hobnobbed and enjoyed the funds that Margaret Thatcher's regime kept pouring for compensations of whites under the Lancaster House Agreement.. He and cronies stole these monies until Tony Blair's regime stopped funding. that was the genesis of the disastrous land grabbing from the Whites coupled with political pressures from war veterans. He never did it for the interest of Zimbabweans.

It was for his own survival interest. It is on record that earlier when war veterans forcefully entered White farms, Mugabe sent troops to forcefully remove them. Of course at that time funds were still flowing from the British.
Report to administrator
0 #14 Lakwena 2019-09-17 10:33
Quoting Akena Moses:

I don't believe that Mugabe from the onset believed in economic emancipation through land reforms.

To the contrary Mugabe hobnobbed and enjoyed the funds that Margaret Thatcher's regime kept pouring for compensations of whites under the Lancaster House Agreement.. He and cronies stole these monies until Tony Blair's regime stopped funding. that was the genesis of the disastrous land grabbing from the Whites coupled with political pressures from war veterans. He never did it for the interest of Zimbabweans.

It was for his own survival interest. It is on record that earlier when war veterans forcefully entered White farms, Mugabe sent troops to forcefully remove them. Of course at that time funds were still flowing from the British.

In other words Akena, like our Mr. M7, all revolutionaries are just diabolic Masters of Violence, who only fight for themselves and family.
Report to administrator
12