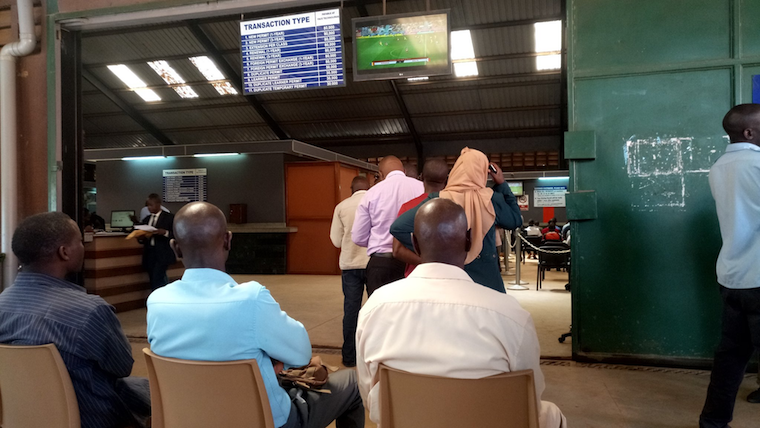 A few weeks ago, I started the process of getting a new driving permit after paying all the necessary fees in the bank. On August 30 at around 1:30pm, I went to Face Technologies in Kyambogo to process my documents.

I found quite a lot of people queuing up, which is understandable given that the company holds a monopoly on issuance of driving permits.
However, what shocked me is that some people had to bribe Face Technologies staff to be given preference.

And this was done in full view of the security personnel, who openly connive with the staff. It took me almost three hours to reach the place where my details were taken. In fact, I was one of the last individuals to be worked on in spite of many other people coming after me.

When I returned on September 4 to pick my card at about 3pm, I found a notice at the gate advising everyone to return the following day because Face Technologies was facing some technical issues.

It was weird because the guards, who were clearly cording with Face Technologies staff at the gate, allowed some individuals inside who had bribed them. The staff refused to be identified and concealed his name tag when I threatened to expose him. So, I and others who refused to bribe them were denied entry.

I returned to Face Technologies on September 9 at 2pm and it was the same thing; a notice claiming that Face Technologies has a technical glitch and, therefore, the guards advised me to return early in the morning the following day. Still, those who bribed the people at the gate were allowed in.

I called the customer care number [0393518586] and expressed my disappointment but a lady across the line said the company is unable to serve anyone after 1pm. She advised me to return on September 13 when the numbers are fewer.

This clearly shows that Face Technologies lacks the capacity to manage the job at hand or their staff and security personnel purposely connive to extort money from desperate public eager to get driving permits. Maybe we need another company to do this job. Either way, something needs to be done.

The East African Crude Oil Pipeline project (EACOP) is of a trans-boundary nature with crossboarder social and environmental impacts between Uganda and Tanzania.

Many internal issues and concerns about the project were observed during AFIEGO’s contestant engagements with the projects-affected persons in the EACOP corridor in Kikuube, Hoima, Kakumiro, Mubende, Sembabule, Mityana and other districts.

The communities have fears that loss of property, especially land, where the project-affected persons (PAPs) practice farming may put them at a risk of hunger, as it has been the practice.

There are difficulties in reading and understanding assessment forms compiled in English along the EACOP corridor yet most PAPs are illiterate. Communities have not been able to properly understand how much their property is worth.

There is limited information about the EACOP project areas. There is information gap on project impacts and its related aspects such as on land and compensation processes. Information shared is simply about the maps/GPS display dates and venues, amount of land required but not the project’s potential impacts on the environment, social-cultural, economic and others.

For instance, the subcontractors refused to compensate crops affected by surveys during the first phase of the project while conducting feasibility studies. The land acquisition and compensation process is characterized by secrecy; PAPs are not provided with copies of compensation rates alongside the assessment forms.

I would recommend that a member of the district land board (the secretary or district valuer), a community leader such as local council chairperson move along with sub-contractors undertaking compensation for oil and gas projects in different areas whenever they are to move into communities.

As more land for related oil and gas infrastructure is being acquired, developers and governments’ regulatory frameworks and policies such as the Land Acquisition and Resettlement Framework for oil and gas projects should be comprehensively implemented alongside other laws and regulations on compensation and land acquisition.

Multiple re-displacements by similar oil and gas projects in different communities should be addressed by prior planning, marking and gazzetting areas most likely to be affected by any infrastructures. Finally, information about the EACOP must be made public, and in the languages the communities understand best.

There is no excuse for sexual harassment

Society likes to define this term while leaning in on one gender, the female. It is true that the females face more harassment than their male counterparts. But this doesn’t mean that the males aren’t sexually harassed.

What is sexual harassment? Any form of unwelcome and undesirable sexual advances; whether in public or private spaces, can help us understand this term.

To define sexual harassment in one line may not help us encompass all its different forms. From very big vices like rape and defilement, to provocations such as sending sexual texts to someone who is not interested. All this can be used to understand sexual harassment.

It occurs everywhere around us. Workplaces, at home, church, in hospital, on the street, over social media, and especially in the bars where most people want to blame it on the alcohol. The vice is not limited to places where alcohol is sold. This is why I am particularly happy with Nile Special’s No Excuse campaign against sexual harassment.

But what causes all of this? The male gender has proven over time to be stronger than the female. It is scientifically proven and religiously accredited. This strength was given for protection, however, not assault. A normal person in their right mind wouldn’t feel the need to oppress the other just because they can.

Now this is where the use of drugs and alcohol comes in. Alcohol gives you that feeling of ‘I can, and I will.’ It instills confidence within individuals. One bottle makes you confident; two bottles make you overly confident. Binge drinking makes you stupid. That being said, alcohol abuse shouldn’t be an excuse for sexual harassment.

There are rules to these things. Heavy punishments have been promised. Have they been enacted? I still don’t know. Either way, I wouldn’t want to think that enough has been done. We have had cases of people leaking others’ nudes and walking away with it. Everyone moves on with their life. That ideology of ‘minding our business’ has done more harm than good.

Society has to do something about this. We cannot keep hearing the same stories of people being drugged at parties, lecturers promising students higher grades only after having sex with them, bosses taking advantage of their secretaries.