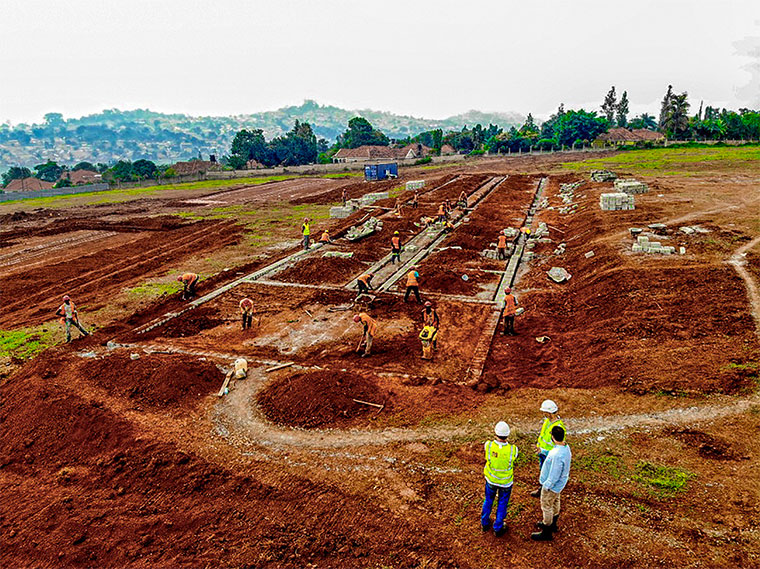 On Tuesday August 6, 2019, the minister of Health, Dr Ruth Aceng, the permanent secretary, Dr Diana Atwine and members of parliament from the National Economy Committee were denied access to the site of the ongoing construction of the International Specialised Hospital of Uganda, located in Lubowa.

It was unclear as to why the officials were denied access to visit the site, a visit meant to satisfy the oversight function of parliament. The meeting had been planned over several weeks and the decision to bar them from visiting the site may have been taken quite early on as well.

Finasi/Roko Special Purpose Vehicle (SPV), the contractor, has explained that security turned away the minister and the MPs for their own safety.

The MPs had sought permission from the Health ministry to visit the site. However, they found the gate to the site blocked with a grader and a pickup truck parked at the entrance of the facility.

A statement from Finasi/Roko SPV also notes that it is critical procedure at all construction sites that health and safety measures must be sufficiently adhered to at all times for all persons, including visitors, as there are heavy moving equipment and machinery on site and open trenches, among others, that are potentially harmful to humans if not well managed.

Initial reports indicated that the team from the ministry and that from parliament had been turned away on the orders of the secretary to the Treasury and permanent secretary to the ministry of Finance, Planning and Economic Development, Keith Muhakanizi. The reason for denying them access was that the construction site had been handed over and government had no business walking on and off the site as works were already ongoing.

However, it should be noted that the construction of the facility at Lubowa is shrouded in mystery. First, the government of Uganda secured a promissory note of $379m and gave it to a handpicked Italian firm, Finasi.

No procurement process was done and a shell company to oversee the process has since been created in what is termed a special purpose vehicle in a venture that also has Roko Construction Ltd.

Upon completion, this will be the most expensive health facility in the country with just the interest on the loan amounting to Shs 477bn. This money could have been more than enough to renovate, upgrade and equip all the regional referral hospitals in the country.

Members of Parliament have not warmed up to the project with a number of them questioning the government’s rationale of inviting an investor, who has to be guaranteed with huge sums of taxpayers’ money and also be given land on which to set up the facility.

They also objected to the high-interest rate of Shs 477 billion and the purpose of financing the facility, considering the poorly-financed hospitals across the country.

However, the request was endorsed by the National Economy Committee of parliament which had been given a task to review the application and interact with key players in the health and finance sectors to establish whether the partnership had value for money.

The Specialized Women and Neonatal hospital in Mulago, built on similar terms as the Lubowa facility, was built at only $25m (about Shs 92 billion) far less than the $379m (Shs 1.4 trillion) that is needed by the investors to construct the International Specialized hospital, considering that the cost of the land is not factored into these equations and the constructor, Finasi, was not subjected to a competitive bidding and evaluation process.

Needless to say, the Specialised Women and Neonatal hospital in Mulago has been in operation for slightly over a year and is yet to achieve optimum output. How, then, will an overpriced facility in Lubowa, meant to stem the influx of Ugandans seeking specialized medical care abroad, compete with similar facilities elsewhere, that do not have an eight-year timeline to pay off an impossible debt?

We call upon government to exercise caution when entering into deals with so-called investors facilitated using taxpayers’ money. We also urge the government to indulge in open contracting practices especially where public funds are concerned.

The author works with the Anti-Corruption Coalition Uganda.

In other words, Ugandans taxpayers must have already lost their shirts and skirts to an organized crime syndicat.
Report to administrator
+1 #2 ed@yahoo.com 2019-08-15 13:48
Thank you, but everyone can clearly see that this is a personal project funded by taxpayer's money.

I don't know what we did to deserve this systematic destruction of our Country.
Report to administrator
0 #3 GwangaMujje 2019-08-20 14:31
Finasi/Roko Special Purpose Vehicle (SPV), the contractor, has explained that security turned away the minister and the MPs for their own safety. For God's sake, who are these imbeciles fooling?!!,

Safety from what? Wait Uganda, tomorrow they are going to tell us how the investor has failed to meet his loan obligations and therefore we have to use the promissory note to pay back the loan money.
Report to administrator