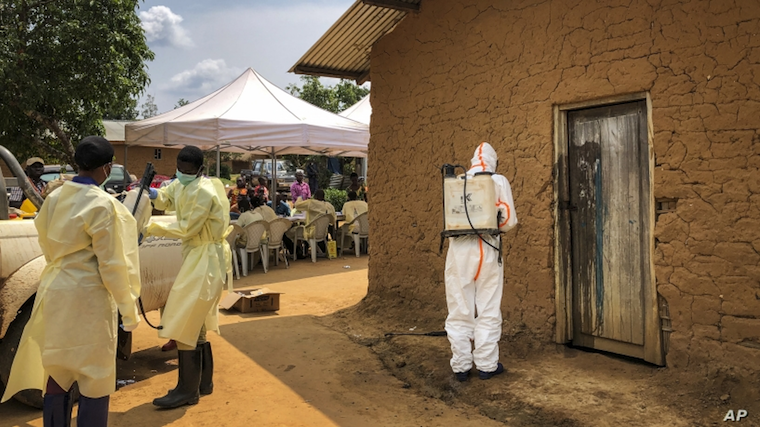 A health worker decontaminates a village house in DRC

Ebola has exacted a heavy death toll on Uganda, Rwanda and the Democratic Republic of the Congo (DRC) for a long time.

The viral disease has killed hundreds of people and overwhelmed facilities and health workers. And every time this epidemic crosses the common borders of the three countries, the response has been slow and reactionary.

That is, the emphasis is put on isolation of the sick and educating relatives and health workers on how to handle the affected persons. Efforts to prevent the viral disease’s resurgence have not been very successful in the past. This is partly blamed on the lifestyle of residents in the most vulnerable areas.

It is said monkeys are the natural habitat of this virus; therefore, people who eat monkey meat help the contraction and spread of this disease.

Also there were no preventive vaccines to combat this deadly disease in the past. But there is good news now that Uganda has embarked on an experimental vaccination of people in the vulnerable border areas. This effort should be embraced by all concerned countries. The attention given to the Ebola vaccine should exceed that given to political terrorists.

The experimental Johnson & Johnson vaccine will be administered to health care professionals, as well as ambulance drivers, burial teams and cleaners. The trial is expected to last two years and cover 800 people in the western Mbarara district.

Once in 2013 and 2016, DRC tried using vaccines manufactured by Merck. Though the vaccines seemed effective, the campaign did not cover the entire country and the neighboring countries.

It is said that over 180,000 people have received this vaccine. Again typically, this effort was frustrated by the unsteady supply of the vaccines.

The Merck vaccine is administered through one shot and takes 10 days to be effective, the Johnson & Johnson vaccine requires two shots, two months apart.

Uganda, Rwanda and DRC need to take an aggressive vaccination campaign against Ebola just like they have done against hepatitis. They also need to take a holistic approach to the promotion of this vaccination.

The medical personnel need to dispel the lurking anti-vaccine fear of the unknown side effects. The regional governments need to stabilize and control the movement of persons and animals across the borders.

There is violence in northeastern DRC, which could curtail disease-control efforts. If the government resolve against Ebola is as firm as that directed against terrorists or political opponents, it is conceivable that the Ebola epidemic will become a disease of the past.