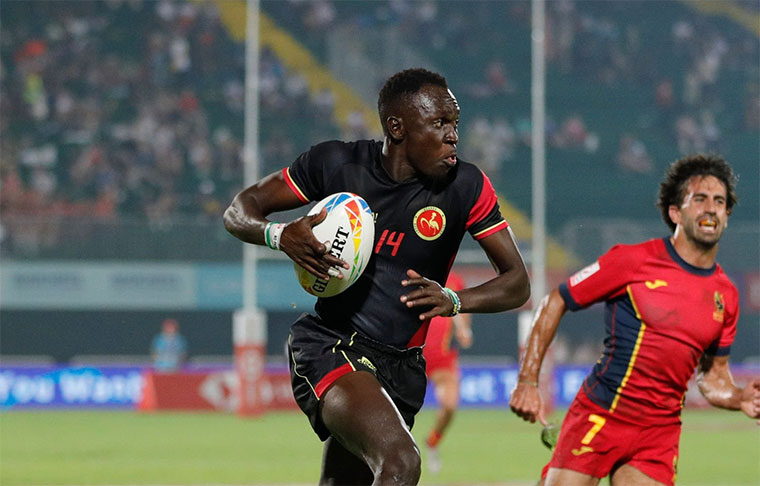 Dennis Etwau, 26, featured for the Rugby Cranes 7s side at the HSBC World Rugby Sevens series in Dubai for the first time last weekend.

And to mark what was simply a huge step up in career for the Jinja Hippos winger on one hand, he played all five games, a sign of coach Tolbert Onyango’s faith in him.

On the other hand, it was a losing experience at each of the five occasions: France 10-7 Uganda; Ireland 33-15 Uganda; Spain 26-5 Uganda; Fiji 29-14 Uganda; before winding up against Canada in a losing thirteenth place playoff semi-final 29-0. Losing can dent one’s confidence.

Yet, Etwau can look back with a sense of pride and self-esteem, following the four tries he made in five games while in the Middle East.

This was the first time Etwau was on the mark for Uganda’s 7s national team. In 2016, when he made the squad to the Africa 7s championship, he did not play a single minute. He probably was not ready and, for that matter, he did not feature for the national team until last year at the Safaricom 7s. He played a few games then, but did not score.

For that matter, his recent exploits are unforgettable, as he was excited to score four tries. Etwau was Uganda’s leading scorer in the tournament.

Aaron Ofoyrwoth came second with two tries. Against that experience in Dubai, with the Cape Town HSBC series due this weekend, Etwau noted that he has to put in the work, to get better.

One thing that is for certain, is the fact that Etwau is now living his dream, because of his recent domestic form. Etwau inspired Jinja Hippos recently to the Nile Special National 7s championship.

Against all odds, they emerged better than the more fancied Heathens, Kobs and Pirates. That has seen him and three of his other Hippos teammates: Tawfik Bagalana, Timothy Mugisha and Jacob Ocen, catch the eye of Onyango.

It is Etwau’s try and conversion, that won the Kyabazinga 7s final against Kobs. It remains memorable. But probably not as much as his sudden-death try in extra time against the Plascon Mongers at the quarter-finals, when Hippos had to close down a deficit.