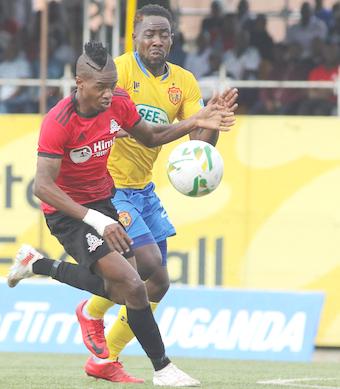 The return of gifted attacking player Allan Okello to KCCA FC on loan from Algerian side Paradou AC while the transfer window was still ajar, has created a buzz before the kick-off of the 2022/23 Uganda Premier League season this weekend.

It probably comes as no surprise. On top of scoring four goals on his league debut, early in 2017 in a 7-0 whitewash of Onduparaka FC, Okello helped KCCA reach the group stages of the Caf Champions League for the first time in 2018.

KCCA also won two league titles and two cups during that period. Therefore, it is in such regard that KCCA take Okello. And they hope that his teaming up with midfielder Moses Waiswa, who recently joined from South Africa’s SuperSport United, can see coach Morley Byekwaso reclaim the league title for the first time since 2019.

But that will not be easy with Vipers SC, the defending champions, still in the picture. Vipers beat KCCA by a record 18 points difference last season. And although they have lost last season’s MVP Ceasar Manzoki, skipper Halid Lwaliwa and midfielder Bobosi Byaruhanga, they have brought in some exciting talent in Marvin Youngman, Murushid Jjuuko and tenacious Congolese midfielder Olivier Osomba.

Add full-back Ashraf Mandela and striker Cromwell Rwothomio from URA FC, and Vipers looked armed for battle. Speaking of URA, they have lost so many key players, which leaves many wondering whether they will be competitive this season like they were under coach Sam Ssimbwa in the 2020/21 season.

Then, they finished second, one point behind eventual winners, Express FC. URA will now have to rely on striker Ibrahim Dada and a midfield of Saidi Kyeyune and Shafik Kagimu, which struggled last season. Notably, BUL FC had a fine season, last, finishing fourth, 22 points behind Vipers. That was capped by winning the Stanbic Uganda Cup.

Such experience is expected to put coach Alex Isabirye’s side in good stead, especially when one considers that he has added striker Frank Kalanda to his arsenal. For Kalanda’s former side Express FC, this season is another rebuilding one for coach James Odoch, after the departure of a greater part of his team, after last season.

Top marksman Eric Kambale joined El-Merreikh of Sudan while Mahad Kakooza, Charles Musiige, Godfrey Lwesibawa, Enoch Walusimbi and John Byamukama, all who inspired the 2020/21 championship, left. But with the likes of youngsters Faizal Ssekyanzi and Ivan Mayanja, the Red Eagles should entertain.

However, goals will not necessarily be easy to come by, although with the signing of striker Anwar Ntege (scored eight goals last season) from Busoga United, Express has outlet.

Unfortunately, Busoga United coach Abbey Kikomeko has not sounded upbeat about the forthcoming season, after nearly his whole team from last season left.

He is starting from scratch again, and although he engineered the side's survival on the penultimate fixture date of last season, where he also picked the SC Villa scalp, he may have over ridden his luck.

SC Villa's season was a disappointing one for the record 16-time champions. And as was, has it continued. The biggest chunk of their players last season left. But the arrival of midfielder Ivan Serubiri from URA will cover up for the departure of Amir Kakomo.

Serubiri does not only offer size, but he is a dead ball specialist. Together with former Proline FC striker Ivan Bogere, Villa have added to the firepower to play alongside the enterprising play-maker Travis Mutyaba.

Gaddafi/Modern FC will be Villa’s day one opponents. They were one of the surprise packages, at least in the first round of last season, as Gaddafi FC. And with coach Wasswa Bbosa bringing in his former Express brigade (Sadiq Ssekyembe and Kakooza, among others), alongside players like Elvis Ngonde, they look formidable.

So do Arua Hill. A team with the experience of coach Livingstone Mbabazi, backed by the players like Atendele Geriga, Bright Vuni, Rashid Toha and forward Rashid Kawawa, they still look tough. The same cannot be said about their Arua rivals, Onduparaka FC, who hired new coach Haruna Mawa. First, they lost their talisman Muhammad Shaban to KCCA; so, the pressure on Emmanuel Okech and others for goals, should be immense.

In addition, newly promoted sides Maroons FC and Blacks Power from Lira are likely to have mixed fortunes. The former has players with UPL experience, including coach Muhammad Senfuma, who added striker Andrew Kigozi from KCCA and midfielder David Ndihabwe.

Asaph Mwebaze will be leading Bright Stars this time. He has brought in a number of prodigies, after releasing several veterans, and so much focus will be on him to ensure that the Kavumba-based side do not struggle as much as they did last season.