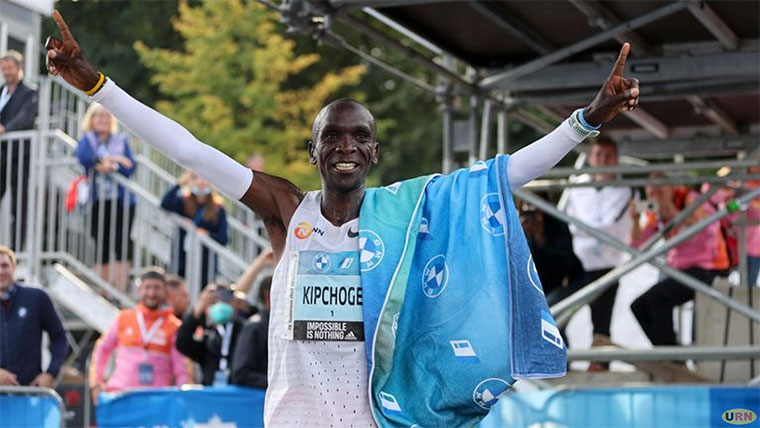 37-year-old Eliud Kipchoge on Sunday broke his own marathon world record (WR) in the Berlin Marathon.

The Kenyan crossed the line in a time of two hours, one minute and nine seconds, before his fellow countryman Korir, Mark who came second in 2:05:58. This was Kipchoge’s second marathon this year after winning the Tokyo Marathon in March.

Kipchoge, who will turn 38 in November this year, beat his previous WR he set four years ago in Berlin by 30 seconds, becoming the second time the Kenyan runner has set the official men's world record at the race in the German capital.

In the course of the race, the Ethiopian duo; Guye Adola and Andamlak Belihu were the only athletes to keep up with Kipchoge's torrid pace until the 10km mark of the men's race, which they completed in 28:23, comfortably within the world record target.

But, as they approached the 14-kilometre mark, Adola, the 2021 winner, soon fell off the pace set by Kipchoge’s preferred pace-making combo of Moses Koech and Noah Kipkemboi. At the 35-kilometre mark, Kipchoge was over one minute within his world record pace but slowed slightly and with 2km to go, he was nearly 36 seconds faster than his 2018 winning time.

After taking the crown once again, tens of thousands of his supporters and colleagues took to social media to applaud the veteran marathoner for the new world including Uganda’s long distances icon Joshua Cheptegei who is Kipchoge’s teammate on the NN running team.

“Indeed, well in Eliud Kipchoge. No human is limited, a legend of a time!!! A superb 2:01:09 WR. Many congratulations, every stride of you was inspirational. Berlin marathon is the place for breaking limits indeed,| Cheptegei posted.