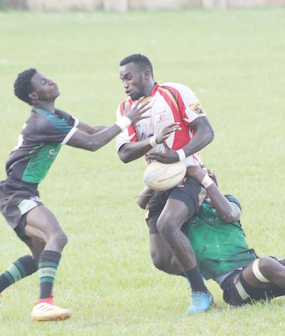 The Nile Special rugby 7s round six heads to Jinja this weekend. It is the penultimate round of this year’s 7s rugby season. Action is slated to be at the Kyabazinga stadium, Bugembe between September 24 and 25.

This will be a special circuit, particularly for the people of Jinja, because their team, the Hippos, are the unlikely leaders of this year’s national 7s championship; and they are getting ever closer to a maiden national title.

When the Hippos made the final against the Heathens in Entebbe during the second round of fixtures, they lost narrowly 10-12. Yet, not many took them seriously. The perception was that the Jinja Hippos’ showing was a flash in the pan. But they went ahead to make the final in the third round held in Arua a week later.

However, they lost to Heathens 0-10 that time round. And maybe the skeptics had been vindicated. But what was not being recognized about the Hippos’ performance, is the consistency in their game. The Hippos have made it into the finals as many times as the more established sides in Ugandan rugby.

While Heathens have made three finals, won two and lost one, and clearly are more decorated, they are two points behind Hippos, who are top of the log. Hippos have 87 points, all because of making it into three finals, one semi-final and one quarterfinal finish being their worst display in five rounds of games.

Last weekend, in the Tooro 7s held at Buhinga in Fort Portal, Hippos lost 7-10 to Kobs. That was Kobs’ second circuit win this 7s season, coming right on the back of their Rujumba 7s triumph on September 3 and 4 at King’s Park, Bweyogerere. Kobs are third on the log with 74 points, though.

As it stands, Hippos, a side established back in 2013, and the last team that legendary Robert Seguya coached before passing on last year, could end up winning the championship without winning a single circuit. Each circuit win earns a team 22 points, and the subsequent positions score 19, 17, 15 and 13 respectively.

For the Hippos to raise their chances of winning this year’s 7s championship, a win in one circuit and a runners-up placing would suffice.