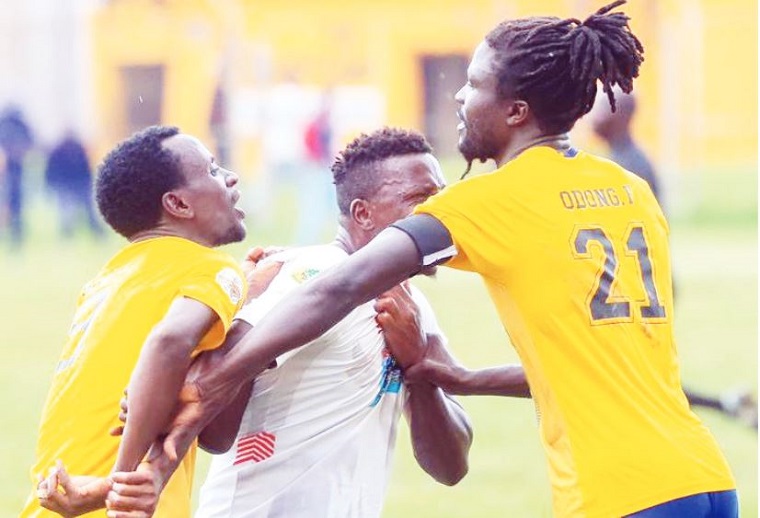 Kataka players assault a Kyetume player after the match

The Uganda football fraternity is eagerly waiting to see what punishment the Fufa Ethics and Disciplinary Committee impose on Big League side Kataka FC after their players and officials beat up Kyetume FC players, officials and fans after the decisive league game at Mbale municipal stadium last Thursday.

Immediately after the last whistle, there was a rush for the exits as stones, bricks and bottles flew around. Kataka players and their fans were infuriated after losing the match 2-3 and vented their fury over what they deemed as poor officiating.

Kataka came into this game as log leaders and only needed a draw to book a place in next season’s topflight but with the win, Kyetume joined Maroons and Blacks Power in the Uganda Premier League. Police had to use teargas and live bullets to calm the situation. Referees were not spared; they were assaulted too and got locked in the dressing rooms by the angry Kataka supporters.

The enraged rioters also smashed windscreens of vehicles parked at the stadium, including that of Fufa official Issa Magoola. Being the home side, Kataka had earlier refused StarTimes, the league sponsor, to relay live this game on Sanyuka TV. The TV crew and some journalists were insulted. It took Magoola time to convince them to have the game relayed.

This is not the first time for Kataka to treat their opponents in an unsporting manner or have their officials make stupid orders to their player. Unfortunately they are always handled with kid gloves. One might wonder where Kataka get those powers.

I am informed whereas the club is owned by Patrick Isiagi, it is run by Latif Mafuko, the club chairman, and Hassan Kirunda, one of the club officials. Both Mafuko and Kirunda are Fufa delegates and close buddies of Fufa boss Moses Magogo. Peharps this is where the arrogance comes from.

Interestingly, Fufa’s judicial body (CDP) often makes laughable decisions. A case in point is the first round UPL game between Onduparaka and KCCA where a replay was ordered yet evidence of violence fully implicated Onduparaka.

There are calls for a ban to be handed to Kataka officials and players who were directly involved in the stadium fracas. Now is the time to arrest the rot. No amount of provocation should warrant violence. There are better ways of dealing with grievances against referees. Complaints can be lodged with UPL secretariat for appropriate action.

In a nutshell, stern action has to be taken to rid our football of violence. Officials and fans identified as the root cause of violence must, in addition to being banned, face arrest and prosecution.

Referees found to have deliberately fixed matches or those who exhibit gross incompetence must also be punished heavily. A permanent ban from handling any match in Uganda would be appropriate action. Fufa must come down hard on hooliganism now.