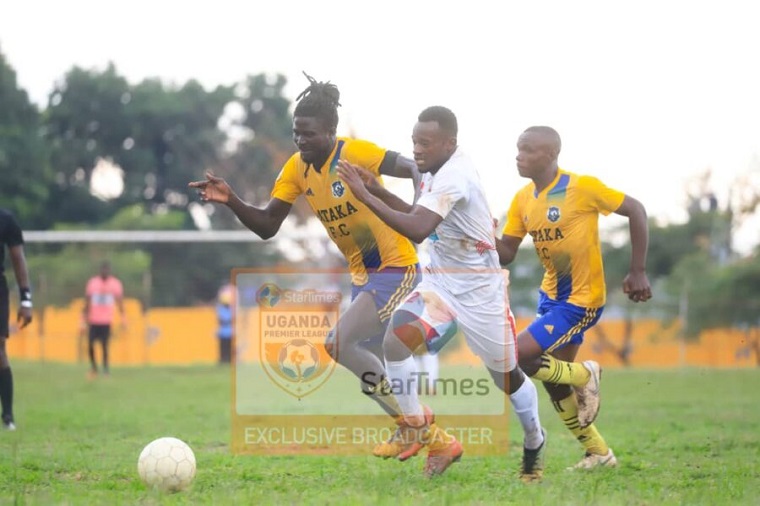 Action between Kataka and Kitara

On April 28, viewers watching the Fufa Big League final-day showdown between Kataka FC and Kyetume FC must have been shocked to see unrestrained violence at the end of the match that the latter won.

Immediately after the referee had blown the final whistle to send Kyetume into the Uganda Premier League (UPL) at the expense of Kataka, officials and players of Kataka descended on Kyetume players and beat them up. The match officials were not spared either as were the Kyetume fans and officials.

In the aftermath of this violence, social media was awash with condemnation of Kataka and its leaders led by its chairman Latif Mafuko and Hassan Kirunda. There is actually a trend of Kataka officials acting violently against officials of other teams or trying to influence results and expect them to walk away with a slap on the wrist from the latest debacle.

For years, the two individuals have been notoriously renowned for being barking dogs of Fufa president Moses Magogo and their foray into club football administration was a tactical ploy of protecting the reign of their master when it comes to influencing Fufa general assembly politics.

To jog your memory, Mafuko and Kirunda blocked Mujib Kasule from nomination for the Fufa presidency last year. It is the politics that was at play between Kataka and Kyetume and you may be surprised at how they play it.

For starters, there is a big likelihood that Kataka officials did not intend to have the team join UPL because that would lessen their influence in football politics. For those who may not know, Kirunda and Mafuko, along with Kitara FC owner Roger Byamukama control the Big League.

They are the gatekeepers of the division and that is where they control football politics. Perhaps they know that joining the big boys in UPL is a step too big for them and I doubt they have the capacity to maintain the teams there.

It is no surprise that for years, Kataka and Kitara have remained in the Big League. It could be deliberate that the leaders of these two teams don’t tell the players about their mission to stay in the small pond. Unfortunately, their players end up thinking other teams have cheated them to qualify to the UPL.

The violence they meted out could have been a smokescreen to hide their real ambitions to stay and maintain the Big League cluster in the hands of their master. Strange things always happen in Ugandan football.