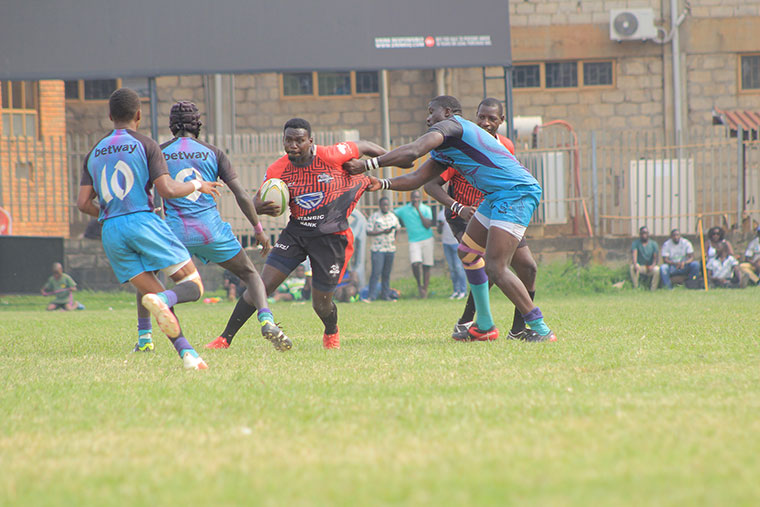 The Stanbic Black Pirates captain Ivan Magomu remained animated long after the final whistle had gone in their game against the Kobs last weekend.

Despite his side’s 17-13 victory over their perennial nemesis, Magomu still went on to confront one of the game’s commentators, Kobs former star Allan Musoke.

Magomu told Musoke that he needed to be professional as he executed his work on the microphone. He sighted that Musoke only praised the good things Kobs did on the field, but did not do the same for Pirates even when they were on top of proceedings.

For some, Musoke’s inclinations, being that he is a Kobs legend, are a small matter. But to Magomu, he felt that match commentators have got to eliminate bias. Notably, the underlying matter from this seeming fall-out, after the game, was indicative of how much it meant to Pirates to beat Kobs in the league.

This is something Pirates had not done since March 2018. So, achieving it this time marks a huge statement of intent by Pirates to win their second championship since 2017.

“We came into this came with so much hunger. But even more significantly, determination, to exorcise the Kobs ghost,” Isaac Masanganzira, Pirates’ centre said.

Masanganzira, who for the second time this season (previously against Rams, when he scored four tries), was voted man of the match, noted that as a team they have been working hard during the off-season, to overcome the mental block, that they have had, when facing Kobs and the other giants, Heathens.

“We came into that game fearless, which was not the case previously,” Masanganzira said, after his defensive display, was instrumental in foiling the threat of his national teammate, Pius Ogena. Pirates coach Bobby Musinguzi said that Masanganzira’s performance was a major building block, that lifted everyone in gaining territory.

But also, ensured that Pirates were dominant in the breakdowns of play. Incidentally, Pirates’ pack is looking good too. It is in forwards that Pirates have previously struggled against Kobs and Heathens. But now, with the return of experienced Ivan Wavammunno, Pirates have options.

Better still, with the recent acquisition of Frank Kidega at lock and Peter Bisaso, the ever present Nathan Bwambale, Sunday Jaguar and Alema Ruhweza, Pirates do not only have options, but tough competitors, to push through for a title onslaught.

On the other hand, Kobs’ title defence is looking derailed. It has coincided with the fact that their title-winning side last season, is without Brian Odongo, Brian Asaba and Byron Oketayot, who were crucial to their pack.

Besides, in the Ugandan league, it is one of Pirates, Heathens or Kobs, that wins against the other, who wins the championship. And the fact that Kobs has lost to Heathens and Pirates in succession, spells doom for the 13-time champions, Kobs.

In addition, Kobs are making so many uncharacteristic mistakes. They conceded so many penalties against Pirates and Heathens earlier on. In fact, Magomu’s three second half penalties won the game for Pirates.

In fact, Kobs did just enough on Wednesday, when they bounced back from two successive defeats, to beat Rams 28-13. Pirates continued with their impressive form, when they beat Impis 15-9. In addition, Heathens were dominant against Warriors at Kyadondo subduing them 79-3. Buffaloes beat Mongers 15-10 while Hippos edged out Rhinos in Jinja 18-14.