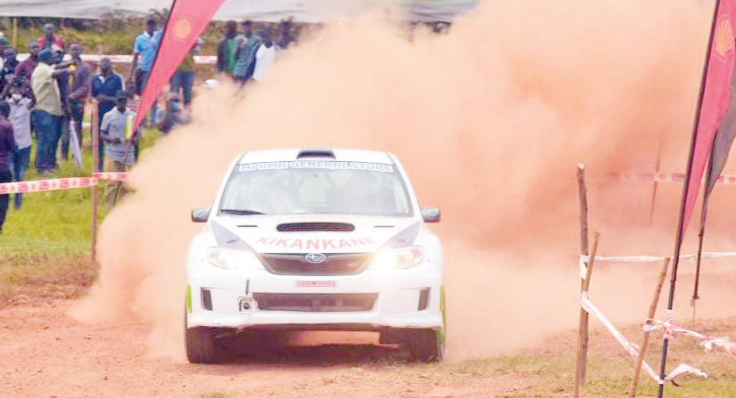 National rally champion Duncan ‘Kikankane’ Mubiru drives past fans during a past event. Mubiru starts his title defense in the Mbarara Rally due this weekend

As such, Mubiru will begin the season as favourite. Yet, considering how other rally drivers are setting up for the new championship, Mubiru is going to have a real run for his money to defend his title. For starters, Ponsiano Lwakataka, whose car broke down in the last Mbarara rally, just a few kilometres to the finish, has his car raving, and ready to challenge for the championship again.

Lwakataka spent the whole of last week in Nairobi mapping his Subaru N12B, and he is raring to go, hoping to win his first championship since 2007. But Lwakataka will not be the only challenger for Mubiru. Former champion, Ronald Ssebuguzi, who did not have a good season last, is determined this time round to exorcise those ghosts.

First, he crossed from his club UMOSPOC to MOSAC, just to secure a competition license for this year. This followed the suspension from the sport for one year of UMOSPOC. In addition, the 2012 and 2013 champion Jas Mangat is also expected to be part of this year’s cast soon after he has sorted out his business issues.

With others like Omar Mayanja and Arthur Blick Junior, who intends to do the full season with his teen son Alestar Blick Jnr in a Mitsubishi Evo X, this year’s championship should be exciting and quite competitive.

This weekend’s rally is set to cover 320km. However, Jeff Kabagambe, the FMU deputy vice president in charge of Motor Rallying, said the NRC has been divided into different categories: The Premiership and Standard.

Kabagambe said this was done to create more competition in different categories. The top 12 drivers last year will be driving in the Premiership and this is going to be the main category for those that can be termed as elite drivers to contest for the main NRC title.

Those drivers that were irregular last year like Susan ‘Super Lady’ Muwonge will be put under the Standard category. Meanwhile, organizers of the Pearl of Africa rally due in May, have been
warned against failure to uphold safety measures.

At the safety training recently, the FIA Africa safety delegate William Louw outlined that they are aware of big crowds during rally events in Uganda. But he emphasized that running a safe and accident-free event is key, to ensure that Uganda can keep the African rally event.