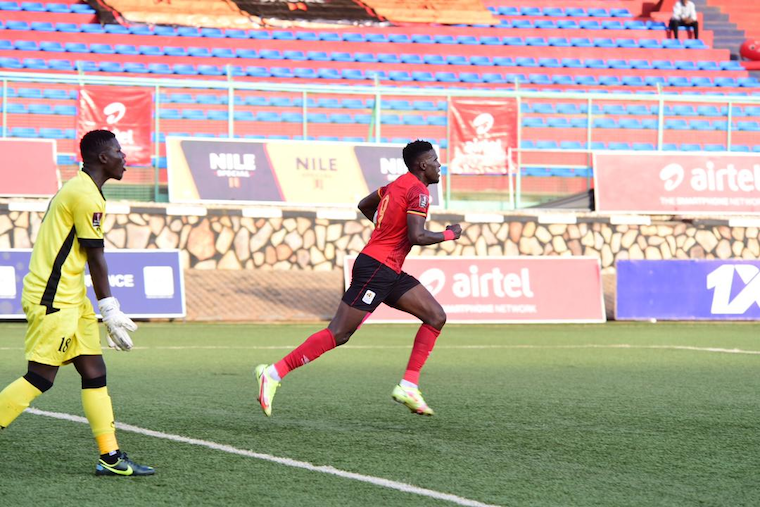 Fahad Bayo scored the equilaser in the 88th minute

Uganda Cranes have been effectively been eliminated from the FIFA Qatar 2022 World Cup Qualifiers following a 1-1 draw with neighbours Kenya at St Mary's Stadium Kitende. Uganda's fate was sealed and stamped after a comfortable 3-0 Mali win against Rwanda in Kigali a few hours later.

Uganda had to win both its two remaining matches against Kenya today and Mali on Sunday. But after 5 games, Mali tops group E on 13 points and advance to the next round while Uganda on 9 points, Kenya on 3 points, and Rwanda on 1 point have all been eliminated.

According to the qualifying format, the team that finishes top of the group advances to the third round. In this round, ten teams that top all their respective groups will be drawn into five home-and-away ties. The winners of each fixture will advance to the 2022 FIFA World Cup in Qatar.

In the first opening minutes of the game played today, both Uganda and Kenya created a few scoring opportunities. However, in the middle of the match, both teams threatened each other's goal but Kenya created more chances.

In the 20th minute, an effort by Kenya’s captain Michael Olunga was cleared by Cranes keeper Charles Lukwago before Joseph Okumu’s shot was also saved by Aziz Kayondo. Uganda also missed a chance when defender Bevis Mugabi’s effort went over the bar.

Uganda’s coach Micho Sredojević made two substitutes after halftime to boost the team’s creativity. He introduced Milton Karisa who replaced Steven Mukwala while Ibrahim Orit replaced defender Aziz Kayondo. Although Uganda looked keen to score, the opponents were the luckiest when in the 62nd minute, Olunga broke the deadlock with a free header off Kenneth Muguna’s free-kick.

Micho made two other substitutions in Yunus Sentamu and Okello as the hosts started the quest for an equalizer but the Kenyans were smart to deny Uganda a chance. In the 88th minute, Kenya’s goalkeeper Brian Okoth made a blunder that surrendered an equalizer to Uganda. Okoth lost possession to Crane’s Fahad Bayo who scored an equalizer.

Engin Fırat, the head coach Harambe Stars said his team had many chances to secure victory but failed to utilize them. Micho said that his side played well but they were denied by the opponents who played a defensive game.

I've just finished rewatching this game. Uganda did not create any chances in the opening minutes.

In fact, UG Cranes' problems are encaspsulated in their very first move at kick-off. See how they cheaply gave the ball away.

2. At 15:24: See how a Kenyan defender gave away but the Cranes played sideways and then went all the way back to their goalie when it was easier to attack the Kenyan goal.

Kenya should have won this game.

Government needs to fix Nambole and get the Cranes playing there again. The lads struggled at Kitende.

It is a damn shame that we cannot maintain a national stadium to acceptable international standards.