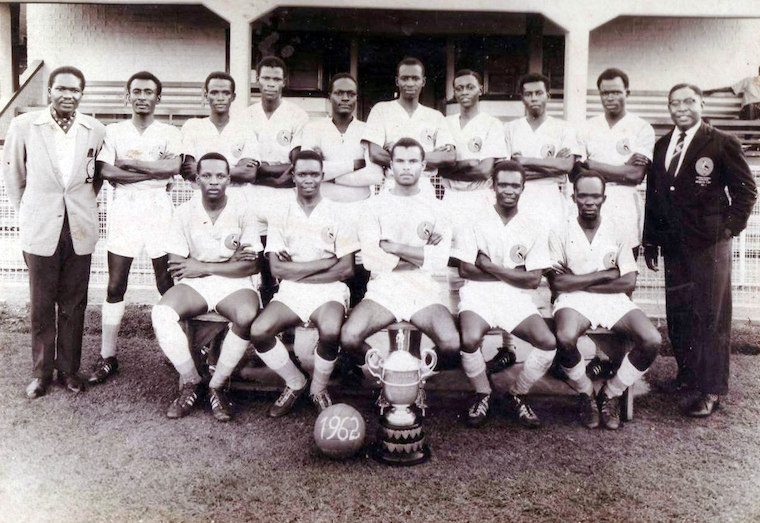 Oftentimes in football, a player emerges to have similar skills and traits with a legend.

But in the case of Ibrahim Dafala, who passed on last week aged 86. It is hard to imagine a top-level defender will ever come up and a better disciplinary record. In a special tribute, this is a slightly abridged version of his profile I did in 2010.

A downright clean player and born leader, Dafala’s unchallenged clean sheet disciplinary record shows that he is a rare breed in Ugandan football.

A mainstay in Express FC’s defence from the 1960s right through to the 1970s, Ibrahim Dafala was a quick-thinking player whose exceptional game reading could take defence into attack in the blink of an eye.

Dafala’s big breakthrough came in 1960. That year, Sulumbey caused an upset by beating Express 3-0 in the Luwangulu Cup (Kakungulu Cup) at Lugogo. The match took place when Express’s coach, Jolly Joe Kiwanuka was away in Britain.

Upon his return, Kiwanuka disputed the result because the game was played in his absence. Being a very influential man in the country, a replay was ordered by the Uganda Football Association (UFA), and Express won 5-0.

Before the match, Sulumbey players and officials were opposed to the replay and only begrudgingly accepted to play. Begrudging indeed as they displayed gross levels of indiscipline.

Throughout the drama, Dafala remained calm. This was quickly noticed by Kiwanuka who asked him to join his team. On reaching the Red Eagles’ training camp, Kiwanuka switched Dafala from striking to central defence. It didn’t take long for Dafala to find his feet in the position. He in fact forced defender Francis Jogo to cross to rivals Bitumastic.

Dafala’s partnership with Moses Wabwayi (stopper), Nafutali Ekesa and Hassan Fauza on full backs made Express defence impregnable. In 1961, Dafala was selected in the Buganda region team and after an outstanding show in the Aspro Cup (Regional Cup), it was obvious that a national call-up was beckoning. However, Uganda national team coach Clive Bond reasoned that Dafala and many of his Express teammates weren’t ready to play at the national level.

To stress his point, Bond selected only one Express player in the Gossage Cup squad which was preparing for the Kenya hosted event.

This annoyed Express coach Kiwanuka who was adamant that his team was the best in the country. To settle the matter, a ‘grudge match’ between the national team and Express was arranged and Express won 2-1.

Bond was not satisfied and demanded a replay and Nile Breweries donated a cup and Express comfortably won the game 3-1. As a result a fresh squad of 18 players had to be summoned. It included eleven players from Express, including Dafala.

In the 1962 Uganda national team squad handled by Kiwanuka, Express had eight players in the starting XI which beat Kenya to the Gossage Cup. In this game, 27-year-old Dafala showed that he was a class apart by shutting out the Kenya attack as Uganda hauled a clean sheet.

Things were looking up for Dafala. The only problem he faced was that, at the time, substitutes were not allowed. This might explain Dafala’s failure to play in the 1962 Africa Cup of Nations (Afcon) tournament held in Ethiopia as The Cranes stuck to the old guard. But he was a kingpin in the Uganda team squad that won back to back Gossage Cup titles in 1962 and 1963.

When Robert Kiberu quit football to concentrate on coaching in 1965, Dafala was the obvious choice as Express skipper. Yet two years later, Dafala left Express for an advanced course in Broadcasting Sound Engineering. The stylish defender was attached to BBC where he spent a year.

Dafala cherished British football so much that upon his return, he was a changed man, not only in his dressing code but also play. As such, his colleagues nicknamed him “British” as the leader in him surged forward. His leadership qualities were put to test in 1967.

When The Cranes went down 2-1 to visiting Nigerian side, Green Eagles, Express’s vibrant coach, Kiwanuka, requested for a friendly game against the visitors. Express won with the same margin. Since then, Kiwanuka tagged his side The Red Eagles since his team had defeated The Green Eagles. It was not always that rosy for Dafala in the national team.

In 1968, England’s Middlesex Wanderers on East African tour, whipped Uganda 7-0 with Dafala in defence. Dafala and Co. made mends when they settled for a 1-1 draw in the return match.

The climax of Dafala’s Cranes career was during the 1968 Afcon in Ethiopia. Uganda lost all the three matches against Ethiopia, Algeria and Ivory Coast, but Dafala who was then 33 put up a spirited show. The three East Africa Challenge Cup titles in a row (1968, 1969 and 1970) was well merited and testament to Dafala’s longevity.

Like wine, he seemed to be getting better with age. When German coach Burkhard Pape took over The Cranes’ coaching reins from Robert Kiberu, he retained an aging Dafala in the team, but picked Alex Oundo as skipper. Dafala was in The Cranes side that toured West Germany.

However, he sustained a serious ankle dislocation in a match against Bavaria FC after colliding with Uganda’s goalkeeper Joseph Masajjage in a match which Uganda won 1-0.

He missed Uganda’s 6-1 victory over Werder Bremen and the 1-2 defeat against Germany national amateur team and also the 1-3 loss to Adams Opel. On return, Dafala travelled to Zanzibar for the 1970 East Africa Challenge Cup and Uganda beat Tanzania 4-1 to win the cup for keeps. That marked the end of his Cranes career.

Much as Dafala ended his career with The Cranes, he continued to serve Express. After a five-year Super League trophy drought, Dafala led Express to its first league trophy in 1974—edging KCC FC with one point.

To show that the victory was not a fluke, the Red Eagles retained the 1975 league trophy still beating KCC to the title with one point. After this feat, Dafala immediately ended what was no doubt a glowing career.

The author is The Observer operations director