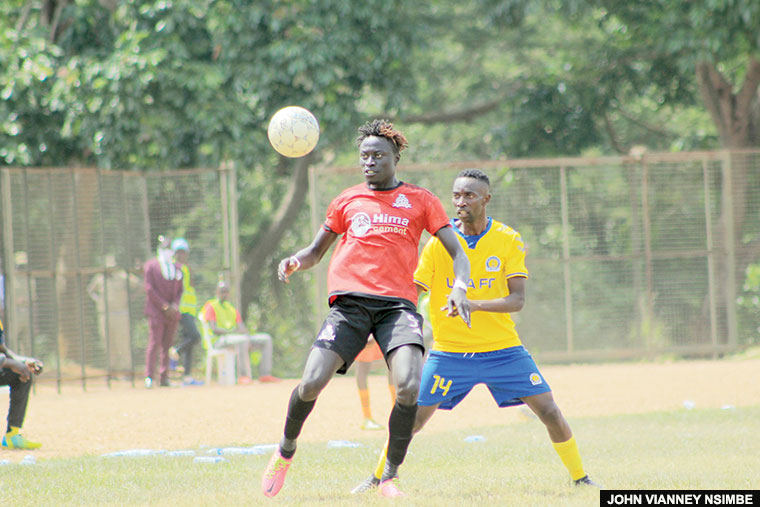 Vipers’ Bashir Asiku (L) checked by Moses Sseruyidde of URA during a league match last month. Both teams are in the title race

With ten games left in the Uganda Premier League, it is a five-horse race for the Championship with only seven points separating leaders URA from Police, writes MARK NAMANYA.

It has been that sort of season where no team has peeled away from the rest of the pack and with the business end of the league upon us, it does look like the chase for the Championship will go down to the very end of the season.

URA, Vipers, Express, KCCA and Police are all in the hunt for the title and given how inconstant they have been, the race will see more twists and turns as we head down the home straight.

With two losses only and the second meanest defence in the league, Sam Ssimbwa’s URA have proven themselves to be worthy challengers. They possess a blend of experience and industriousness, two qualities that will be crucial in the final bend of the league.

Players like Brian Majwega, Benjamin Nyakoojo, Steven Mukwala and Shafiq Kagimu have been outstanding throughout the season but the club’s chances of dethroning Vipers will rest on how well they play in the games down the stretch.

Fred Kajoba’s Vipers, who visit lowly MYDA today, have taken the foot off the gas pedal after a stunning home defeat to Express and a goalless stalemate with Wakiso Giants. The Venoms season has been steered by attackers Yunus Sentamu, Paul Mucureezi and Ibrahim Orit, with Livingstone Mulondo clearing his lines magnificently in defence, but the club must reawaken their first-round form to retain hopes of defending their crown.

Third-placed Express have arguably been the surprise story of the season. After seasons of off-field changes and recurrent pre-season optimism, the Red Eagles finally look like a team with a date with destiny.

Wasswa Bbosa has presided over a well-drilled unit that is difficult to beat, and Express find themselves well within touching distance of the summit. Their big striker Eric Kambaale has been a handful for defences while in defence the acquisition of national team defender Murushid Juuko seems to have impacted positively on other members of the squad with Issa Lumu emerging as one of the standout defenders of the season.

Express have conceded the least number of goals in the league – eleven. The Red Eagles are not as fluid going forward as Vipers, KCCA or Police but as John Byamukama’s peach of a strike showed in a 1-0 win at Vipers last week, Express can manufacture the odd goal from other members of the squad. That knack to get goals from as many players as possible will be key in determining where the league title goes.

KCCA’s topsy-turvy season saw Mike Mutebi’s hugely successful spell come to an end after he parted ways with the club but Morley Byekwaso has not done a bad job since taking over the reins. The Kasasiro Boys are not the formidable side of four years ago but they continue fashioning wins that have kept them within sight.

Charles Lwanga has been a thorn in the flesh for opposing defenders and the decent form of Ashraf Mugume, Peter Magambo and Herbert Achai has left the club’s fans with hope.

The weekend’s 1-0 victory away to Onduparaka via a late Sadat Anaku strike was a reminder of the championship pedigree KCCA possesses. Ten games are a long time in football and Byekwaso, who was Mutebi’s assistant, will know his team has a chance to mount a strong chase.

It is 16 years since Police won the Uganda Premier League title and only a brave man would put a penny on the rank outsiders upsetting odds to lift this year’s crown. Yet stranger things have happened in the game of football. Abdallah Mubiru’s squad are on the fringes of the Championship battle, but write them off at your peril.

Brian Mululi’s 11 goals have thrust them to a decent fifth position in a season where Ben Ochen and Hassan Mahmood have come to the fore.

Mubiru remains one of the most respected coaches in the league, not least because of his brand of attractive, attacking football and he will enjoy Police playing the role of rank outsiders in a championship which is open.

Expect more changes at the summit between now and the last day of the season in a race which is a three or four or five-horse race. It has been that kind of season.