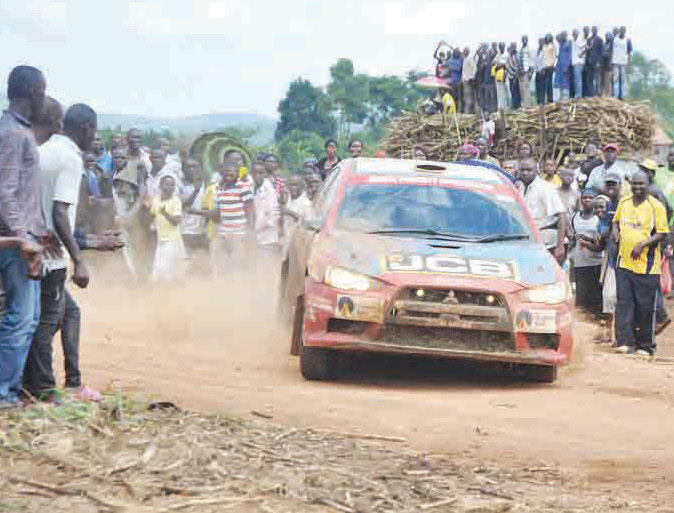 Excited fans cheer on Ronald Ssebuguzi during a past edition of the Mbarara Rally. No fans will be allowed to the route during the Southern Motor Club (SMC) rally due next month in parts of Masaka

The stage is set for what promises to be an all-out first rally of the year but no fans will grace the routes of this Southern Motor Club organised event, MOSES MUGALU reports.

In abiding by the new normal brought about the Covid-19 pandemic, organisers of the forthcoming Southern Motor Club (SMC) have cancelled the traditional super special sprint stage.

The SMC rally, set for the second weekend of April (9-11), will be the first rally event this year. It comes on the back of an eleven-month break ever since government banned sports activities to curtail the spread of Covid-19 in the country. In an interview over the weekend, Jared Kalera, the rally’s clerk of the course (COC), confirmed the route will be closed.

“We are not going to have spectator zones in any of the route sections and no sprint stage,” Kalera said.

While admitting that they have to operate within the odd circumstances, Kalera has designed an ideal route for the drivers to enjoy the rally.

“It will be a fast rally,” Kalera predicted, adding that there are no rocks in any of the four sections, which pass through private farms in greater Masaka districts.

“So, the drivers should afford to do maximum speeds since they don’t expect any obstacles in the route,” he added.

The shortest section will be nine kilometres while the longest is 34 kilometres. Two sections will be repeated.

The SMC rally will set the tone for the five-event National Rally Championship (NRC) series this year. It is the shortest calendar
of NRC series in recent times.

Normally, the NRC series comprise eight rallies every calendar. FMU spokesman Frank Serugo said it will be a continuation of last year’s season.

They will enter the cockpit in the SMC rally with high ambitions to resume the title chase. Yasin Nasser is the reigning NRC champion. While Rajiv Ruparelia is the Clubman Rally Championship (CRC) titleholder.

Other events lined up for drivers to score championship points include the FMU sprint (tentatively set for June but subject to the Covid-19 situation in regard to allowing crowds back), Fort Portal rally (also in June), the Pearl of Africa Rally in September and Kabalega Rally due in October.

For drivers, who can afford, racing in the Equator Rally (Kenya) and Tanzania Rally in July and October respectively, will score points towards their NRC title cause.

All drivers and their crew members are expected to test for Covid-19 at their own cost to adhere with the ministry of Health’s recommended standard operating procedures. Serugo said FMU is, in the meantime, engaging government and clubs to help on the cost of tests.