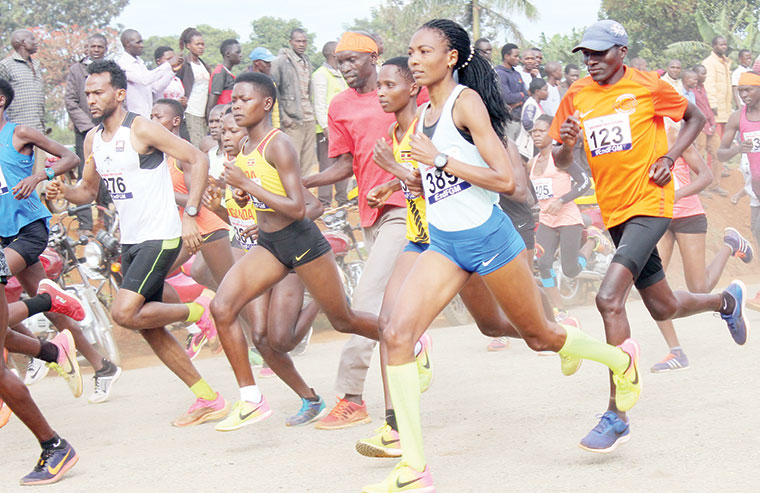 Athletes participate in a test run in Kapchorwa last year

Uganda’s reigning 800 metres women’s World Champion Halima Nakaayi remembers so well how she was troubled by injury last year. The 2019 Doha World Championship star did not perform well at the Diamond League.

This, she recalls, was a result of practising on one of the grass fields around Kampala that had a few bumps, messing up her joints. Because of the pain she was struggling with, Nakaayi could only manage to finish fifth in her 1,000 metres race in Monaco, France last August.

The 26-year-old Nakaayi told The Observer that her injuries last year were a result of not practicing her speed on a tartan surface. Such is what could befall Uganda’s athletes trying to qualify for the Olympics, the longer Namboole stadium remains closed. Already, the Uganda Athletics Federation (UAF) has had to cancel two trial events that would have seen over 300 athletes try to stake their claim for slots at the 2020 Olympics due in July.

But UAF publicist Namayo Mawerere told The Observer that they have been frustrated, that Namboole remains closed, yet it is the only national facility with a tartan track. UAF has a target of 30 athletes to represent the country at the Olympics. Already, 23 have been secured. But with two trials already cancelled, qualification of seven more remains in doubt.

The options are to hold these trials on grass fields across the country. But the problem with grass is that it affects time and, more often than not, slows down runners, making it difficult to match the qualification times. On the other hand, athletes can decide to travel to Kenya, and attempt to qualify from there.

But under the circumstances, that is quite expensive. Mercyline Chelangat, Uganda’s bronze medalist in the 10,000 metres race at the Gold Coast Commonwealth games in Australia, told The Observer that athletes have already invested a lot of their savings in preparation. “So, cancelling trials is a huge eco-nomic setback to us,” she said.

Chelangat, who became a mother in 2019, added that she needs the trials desperately, so that her body adapts to competition again. That is something she had planned for last year, before Co-vid-19 struck.

Without early and ample competition, the time left may not be enough to get the body well tuned. Ronald Opiny, a 400 metres runner said the qualification threshold for his race in 44 seconds 90 microseconds. But his current standing has been 45 seconds 66 micro-seconds.

When he attempted to qualify for the 2016 Olympics, he missed the cut-off mark by 16 micro-seconds.

Yet, this time, he is more upbeat about his chances. But without trials on a tartan track, the situation is bleak for him. And the danger of that, Benjamin Njia, an athletics coach, said: “is the psychological torture the athletes encounter. The uncertainty affects focus, which ultimately impacts on performance.”

When contacted, the Chief de Mission, Tokyo 2020 Olympics Beatrice Ayikoru, said the Ministry of Education and Sports has written to the Ministry of Health to allow them access Namboole stadium.

She is confident that by the end of this week, they will be cleared to use it.

“So, no more worries. The athletes still have a window to qualify for the Olympics up to June 29, 2021”, she added.

The lack of standard running facilities across the country is a great concern, which does not paint the government in good light. The high-altitude performance centre in Teryet was promised back in 2012, after Stephen Kiprotich won gold at the London Olympics.

However, nine years down the road, Teryet is far from being complete. Otherwise, without Namboole today, which a Covid-19 treatment centre, Uganda’s athletes should have had another training or competition facility to use.

Considering how much glory athletics has brought the nation in recent years, observers feel government ought to have handled them as priority. Last year, Joshua Cheptegei set two world records in the 5,000 and 10,000 metres while Jacob Kiplimo won the world half marathon in Poland.

Like earlier mentioned, Nakaayi was a world champion in 2019, as was Cheptegei. In 2018, Stella Chesang, Mercyline Chelangat and Solomon Mutai all won medals at the Commonwealth games.